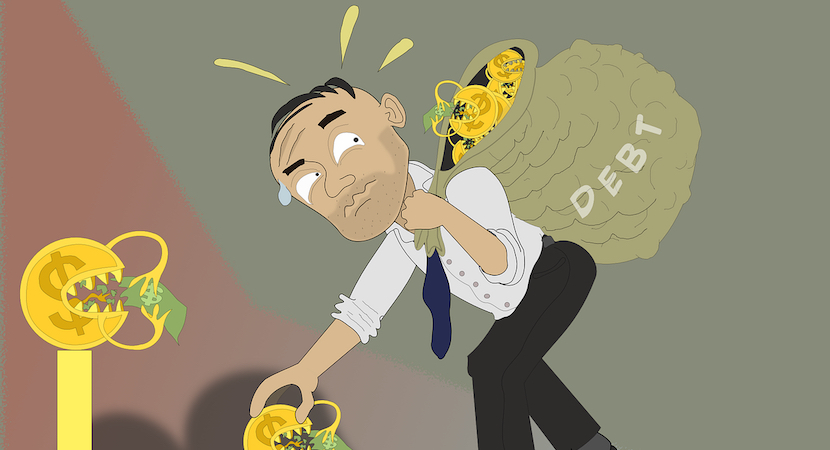 JOHANNESBURG — Two figures stood out the most in last week’s mid-term budget. The first is that South Africa’s debt-to-GDP ratio is fast-approaching the 60% mark and that tax revenue shortfalls are set to balloon from the current R51bn miss to hundreds of billions of rands. With the budget deficit widening and growth of just 0.7% this year, the country is in DEEP trouble. But there is a way out, and it can be done relatively quickly, according to Professor Matthew Lester. It will take lots of painful tax hikes and even increasing the politically sensitive VAT rate… – Gareth van Zyl

There was not much meat on the bone that was Finance Minister Malusi Gigaba’s medium term budget policy statement speech (MTBPS) on 25 October 2017. To be fair, the MTBPS is not the place to even speculate as to the extent of tax increases that will be required in the national budget speech in February 2018.

So now taxpayers will have to spend Christmas holidays in ‘Bring and Braai’ mode, speculating of the tax increases to come. Let’s add fuel that fire.

National Treasury projects a revenue shortfall of R50.8 billion in 2017/18, if the position doesn’t worsen by February 2018. Remember that the final outcome is very dependent on collections over the festive season from bonuses and consumer expenditure. And South Africans are not exactly in playing mode at the moment. In any event, the final shortfall will have two to be added to the budget deficit.

Opening observations (1) something substantial has to be done. And fast. Deficits of this size will reduce South Africa to financial ruin if they continue and (2) no amount of ‘tweaking’ of the current tax base will come anywhere near closing the gap.

In very rough numbers the following can be readily achieved:

A massive personal tax hike could probably secure R20 billion. Such a hike would have to be spread across the entire personal tax base effecting all 6 million paying taxpayers and not just the 1 million earning more than R600 000 pa. Adjustments will have to wait and further super tax rates imposed.

Booze cigarettes get hammered every year. Perhaps an additional R3 billion could be raised.

There may be space for a fuel levy increase of as much as R5 billion. But watch out! Oil prices are rising and the exchange rate is weakening. So the effect of a fuel levy on the poor is a stark reality.

In budget 2017 National Treasury alluded to the possibility of removing the VAT Zero rating on fuel. That’s a possibility, but the effect on inflation would be disastrous.

Many of the bullets applied in recent years are already spent. CGT and dividend tax increases have already been pushed to the limit.

National Treasury has yet to implement any of the suggestions made by the DTC regarding estate duty. Perhaps there is as much as R5 billion that could be recovered in this arena. Moves towards a wealth tax are being discussed, but they will never be ready before 2018.

Even with the mother of all National budget tax increases the gap can only be closed by about R30 billion. SA is only halfway there. Far more is needed.

Remember that there is no new form of taxation ready for implementation in 2018. Sugar tax is about the only new one. And that will not collect more than R1 billion. National Treasury has looked at carbon tax but it is doubtful whether this could be implemented by 1 April 2018. It will probably take another year.

So, in reality, there is only one option: VAT.

Most economists would agree that a VAT increase is the only way to close the gap without destroying the economy. But that’s economists’ talk. Of far greater relevance are the political ramifications. Organised labour have drawn a line in the sand by saying “increase the VAT rate and we will make student protests look like a Sunday afternoon ‘bring and braai.’”

It is interesting that Gigaba sees himself as a future leader of South Africa. If he could break the deadlock over the VAT rate that would indeed be great achievement. But it will take much convincing and negotiation.

A VAT increase will inevitably be hardest felt by the poor. And accredited research tells us that increasing the basket of zero rated foodstuff will make very little impact on that. If the VAT rate is to be increased it will have to be a massive increase of 2-3% and organised labour will have to be convinced that at least half of the increase will be given back to the poorest South Africans by way of meaningful targeted interventions. But if you try and sell such a package to the poor, they simply won’t believe you.

So rumours abound that South Africa might turn to a variable VAT rate. This has always been dismissed as an option due to the enforcement problems. The very beauty of the South African VAT system is its simplicity. And we don’t want change that, do we?

A solution may be to keep the VAT rate at 14%  and impose massive duties on luxury items. This has the added benefit of collecting both the duty and the VAT on the duty. It gets complicated, particularly in international trade arrangements, but desperate times require desperate measures.

The shortfall in tax connections is solvable. South Africa has the talent to rise to the occasion but it is going to have to take the participation of all to skin this cat. Gigaba cannot do it alone.

The return of growth rates and tax buoyancy would solve the problem very easily and in a very short time. Somehow South Africa’s business confidence has to return. That would change things enormously. But integral to the recovery of business confidence is to convince taxpayers that the money is being properly spent!

The current tax base is adequate for South Africa’s needs. If bribery, corruption, wasteful expenditure, and tax evasion could somehow be addressed there would be a better life for all South Africans.

It all comes down to ethics. Do those involved in bribery, corruption, wasteful expenditure and taxation realise that they are stealing from the poorest of the poor.

How do they sleep at night?