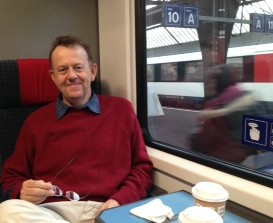 Returning to the highest town in Europe is a reminder of how much the World Economic Forum keeps transforming Davos. Every year there seem to be more cranes. They’re building infrastructure only properly used one week a year. Those last few days of January when the world’s rich and powerful gather here.

Some years back our Davos-based host told me the five star Belvedere Hotel generates over 80% of its annual revenue in WEF week. He wasn’t the only one paying attention. This year there are new luxury Intercontinental and Rixos hotels. Not the kind of brands you’d find in any other mid-range ski resort.

My first visit to the WEF was in 1992 as a member of the reporting media, holders of the dreaded orange badges. I recall having to literally use the tradesman’s entrance. That part hasn’t changed. There remains a stark distinction between reporters and participants. To hold the official participation number to 2 600, the WEF is happy to keep it that way.

Much else, though, is very different to the early 1990s.

The town was a lot smaller back then. Accommodation was easy to secure. Nowadays, unless you book well in advance the best you could hope for is a broom cupboard in Klosters, a 20 minute drive away.

My 1992 week passed in a blur but I do remember security being relatively lax. We consumed pots of coffee with political heavyweights at a sidewalk café opposite the Congress Centre. Today you need a badge and patience to get within 500m of where the action happens.

The first thing that strikes most visitors is the division of this small town into two distinct areas. There are even different railway stations – one called Dorf, the other Platz.

Davos is a living example of the way religion influenced the way European towns developed. Here, the Catholic churches, schools and presumably devotees are all in Davos Dorf. Protestants have their own in Davos Platz.

The Platzers still have the lion’s share of the town’s hotels, restaurants and shops, but that is changing. Both of the new five star hotels are in Dorf, a source of pride to our regular Dorfler hosts.

The Congress Centre, appropriately, is on the border between Dorf and Platz.

One thing that doesn’t change is how expensive Switzerland is to visit. A cup of tea or bottle of water costs five times what you pay in South Africa. It’s worse in this town where, for instance, the price of accommodation trebles during Davos week.

But such is the magnetic attraction of the event that investment continues to mushroom. Five years back it was a surprise to see Barclays Bank take over the local pet shop for WEF week. On this visit I discovered an aircraft and limousine hire company that now permanently rents a prominent retail position in the Promenade. The shop is left empty for 11 months of the year.

Over the years, a welcome change has been in the attitude of locals.

Open hostility to Weffers as we’re called was gradually replaced by grudging acceptance. Now, wearing a WEF badge often triggers an instant smile. Maybe the Platzers and Dorflers are agreed on one thing – their town’s growing affluence is due mainly to the WEF. This is, in many ways, the place that Klaus Schwab has built.

* Alec Hogg is the publisher and editor of Biznews.com