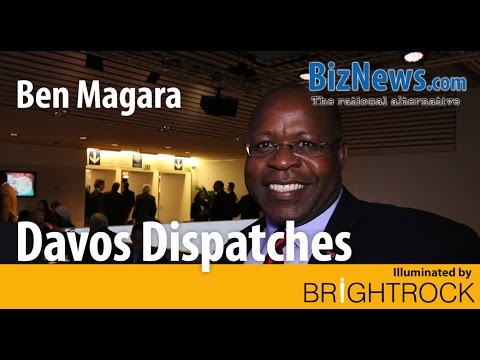 Ben Magara, Chief Executive Officer and Director of Lonmin PLC is officially no longer a ‘D.V’, and has taken some time out to have a quick catch up with Alec about platinum in the global context in Davos at the World Economic Forum. His excitement is palpable, and is positivity infectious. He notes that from attendee’s rings to chats about pacemakers, glints of the presence of the mineral are everywhere at the Meeting. In terms of back home in South Africa, it’s all about action, as opposed to planning, in Magara’s eyes. – CH

ALEC HOGG:  Ben Magara is a D.V. I heard this morning – a Davos Virgin.  Richard Quest at CNN was calling one of our team that…  How has it been – the first year?

ALEC HOGG:  Did you meet any of your clients here – your customers?

BEN MAGARA:  I have met a few customers here, from BASF (one of our main customers) and I actually met the guys here as well.

ALEC HOGG:  Is there any good news for the platinum price?

BEN MAGARA:  We’ve been seeing some upside, so far.

ALEC HOGG:  Yes, but here…what do you get here, from the platinum price?

ALEC HOGG:  We also know they pride themselves on their scientific developments here at the WEF.  Have you seen anything there on fuel cells or other issues?

BEN MAGARA:  I’ve seen a bit on pacemakers (for the heart) and the other one – so simple – is the jewellery.  The amount of people, when I said I am from the platinum mining industry, they said ‘oh, my ring is platinum so you might have mined it’.  It was wonderful to see how all our markets are beginning to see and sense the value of platinum.

ALEC HOGG:  So what are you taking home?  What’s the highlight?

BEN MAGARA:  For me, the highlight is that we all have the same challenges of infrastructure, water, and electricity.  Commodity prices are down but actually, the rest of the world is not whinging about it.  They’re going about, doing their work.  They’re just active.

ALEC HOGG:  Well, we need to do the same.

BEN MAGARA:  I think that in particular, we really need to do the same thing.  We have a National Development Plan and it’s very clear.  Actually, they just say ‘we have a plan – how to create value for all stakeholders’ and they’re doing it.

ALEC HOGG:  We might have a plan, but our problem is in execution.

BEN MAGARA:  Thanks very much Alec.  Thank you.