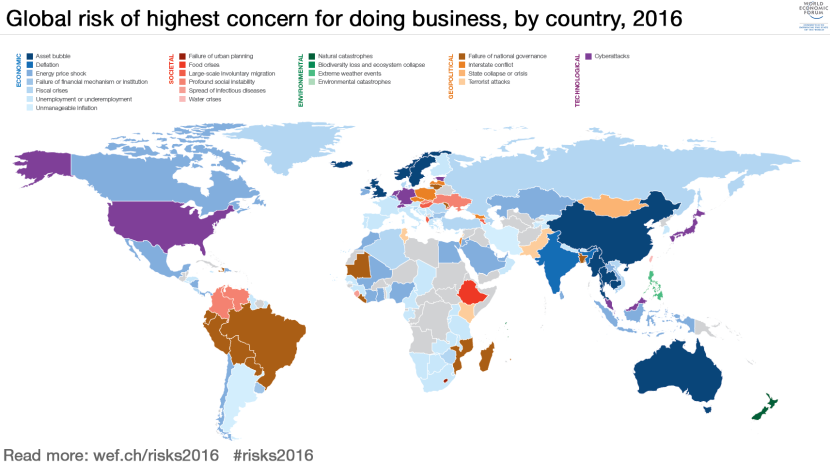 The World Economic Forum’s Global Risks Report 2016 features perspectives from nearly 750 experts on the perceived impact and likelihood of 29 prevalent global risks over a 10-year timeframe. The risks are divided into five categories: economic, environmental, geopolitical, societal and technological. Alec Hogg is in London and he caught up with the content lead on risks at WEF, Caroline Galvan. There was a specific focus on South Africa, with the top three risks – unemployment and underemployment, social instability and critical infrastructure failure. – Stuart Lowman

Alec Hogg is with Caroline Galvan who’s the Content Lead on Risks at the World Economic Forum. WEF just released the 2016 Global Risks Report. What’s the process of putting it together?

The report is based on an expert survey, based on our multi-stakeholder community at the forum. We surveyed over 750 experts across academia, government, business, and civil society.

In last year’s report, there was the emergence of interstate war potential. I read in the latest report that that seems to have reduced a little bit. Is it still at a high level, though?

It’s still at a very high level. Over the past year, there were several risks on top: economic risks, interstate conflict as you mentioned. What we are seeing this year is that actually, those risks are assessed as ‘as likely and as most impactful as in past years’. What has changed is that the slow-burning risks of water crises and climate change have overtaken consideration over economic and geopolitical risks.

So, we’re getting back to more normal things that we worry about.

I wouldn’t say it’s more normal. In fact, we see an intensification of the global risk landscape in the sense that the 24 global risks we have been measuring continuously over the past two years, have increased in likelihood. That means we’re entering a riskier world in 2016.

Riskier in what way?

Riskier in terms of likelihood. We are seeing that global risks are becoming more imminent. They are more felt by economies, societies, and people (i.e. closer to home).

It was interesting reading through the statements that accompanied the report saying that the ‘if the world doesn’t get its governance right, could sleepwalk into a disaster’. What did you mean by that?

I would say that overall, we have seen progress. That’s important to point out. We have seen that success, when it comes to agreements to mitigate climate change (in December 2015 in Paris). These are all positive signs that world leaders can come together across countries to agree to address global risk and in that case, that would mitigate any failure to adapt to climate change.

Caroline, you spend a lot of time looking at Africa as well, which is our particular area of interest. We have Boko Haram causing chaos. We have stuff happening in Sudan. South Africa’s in a precarious situation following the exchange rate movement in the last few weeks. Are the risks on this continent growing?

We do have data for Africa, but we don’t yet have the time surveys over the past year. What I can tell you is that the top risks that are assessed as most likely for the region are unemployment and underemployment, failure of national governance and very critically, the failure of critical infrastructure overall.

What does it mean – ‘failure of national governance’?

Failure of national governance can mean anything from difficulties to agree from a political debt log, to really address the political issues within the country.

One was hoping though that democracy was on the rise in Africa. Is this still the case?

When we look back over the past 30 years, I would say that we have seen a rise in democracy, as you say. We have seen a lot more of peaceful transitions between governments. Overall, I would say I’d be hopeful that we will see more, but we should not ignore the challenges that come with the failure of national governance.

Such as the failed states (i.e. the Somalia’s) of this world.

It could mean anything. In terms of Africa, we also look at the global competitiveness report. For instance, it could be government inefficiency. It could be corruption. It could be undue influence or it could go all the way to state collapse.

Were you able to break anything out for South Africa in this report?

Yes, we have indeed. We surveyed the business executives in South Africa and asked them, “What are the risks/highest concern for doing business in South Africa?” The top three risks were (1) unemployment and underemployment, (2) social instability – which, in fact are very closely linked as this year’s report says – and (3) the failure of critical infrastructure as well.

What does it mean when one is a citizen of these countries and looking at the highlights of these reports? Does it mean that you need to go to the streets and get the government to start addressing it? Or, if they don’t address it, do you give up hope?

One of the key messages of this year’s report is that we need resilient societies. In fact, this year’s report explores the dynamics between civil society, citizens, and governments. We are seeing that if governments/businesses ignore demands or fears of citizens then indeed, it will lead to a loss of trust, which is very important to address – global risks. On the other hand, we’re also saying that if governments and businesses can actually listen to citizens and engage them in the dialogue, then there could be a virtual circle of more trust within the country to address many of the global risks and many of the challenges that we are seeing in the country.

It’s interesting that you mention business because in a country like South Africa, business has seen itself [traditionally] as being in the business of business, and government in the business of governing. Reading from what you’ve said from a global perspective, this is changing.

This is changing, indeed. We are seeing that governments and especially businesses are starting to see that firstly, they have a role to play in addressing e.g. income inequality, unemployment, and underemployment. They’re seeing that they need a stable business environment to operate and many of the global risks that we are looking at in the Global Risks Report 2016 could actually jeopardise a stable business environment. They’re starting to take a more active role as we’ve also seen in COP 21 in Paris last year, for instance.

So that was a multi-stakeholder initiative, much better than purely government initiatives, which don’t seem to have been able to kick on.

Just getting back to the Global Risk Report, if you say that the risk of war between states has reduced somewhat from where it was a year ago and that the climate change (and water, in particular) has risen… Is water going to become a competition or an area of competition between countries?

It could, possibly. We are seeing that climate change could exacerbate water crises. We must remember that the world is already facing water challenges. We are seeing access to sanitation and access to clean water is still not granted to a vast part of the global population. At the same time, we will have more population growth. We will have increased industrialization and increased urbanisation, so the competition over water is only likely to increase. Therefore, the report is saying that we need to build water resilience in order to address climate change.

This is going to be a stakeholder effort. First of all, there needs to be a recognition that climate change risk is going to flow through water: either in the form of too much mater or in the form of too little water. The message of the report is that each country (and across countries) needs to get together for that particular geographical area to find the best way to improve water resilience in their areas.

What is water resilience?

What about paying for it? In many parts of Africa, water is free. Is that part of the solution? If it’s free, you tend to waste.

We are saying that we need to invest, or be more conscious of investment in climate resilience infrastructure. When planning for urbanisation for instance, you already need to take into account how to create water resilience urbanisation. It is part of the planning process to factor in what it means to be water resilient.

Back onto climate change. The energy equation is now becoming a hot topic of debate in many parts of the world. Are you seeing a nuclear comeback? Are people giving up on coal-fired power stations in favour of cleaner energy?

We are definitely seeing a mind-shift towards clean energy. One important find/extrapolation of the report is that we also need to be conscious again of water availability. Take the case of Brazil for instance, who had invested a lot into hydropower but if you don’t have water available, it’s impossible to power hydro facilities. Again, when planning for climate change mitigation for clean energy, we do need to also factor in the need to be water resilient.

Read also: Climate change (for the better): Funds for projects in poor countries

Caroline, how seriously do people take this research?

We are seeing overall that global leaders, when we come together at the Annual Meeting or Regional Summit, that they’re taking it very seriously – especially climate change and water resilience. There are many concerns about the international security outlook so overall, the report resonates for people already feeling and observing within their region.

That again suggests responsible governance and one of the problems is that is an area, which is lacking in the world. How do you bridge that gap?

It’s dialogue. One of the key vehicles at our meetings is to bring the stakeholders together, to bring governments together, and to bring businesses together to engage in this dialogue in the search for joint solutions to many of those global risks.

Caroline Galvan is with the World Economic Forum.