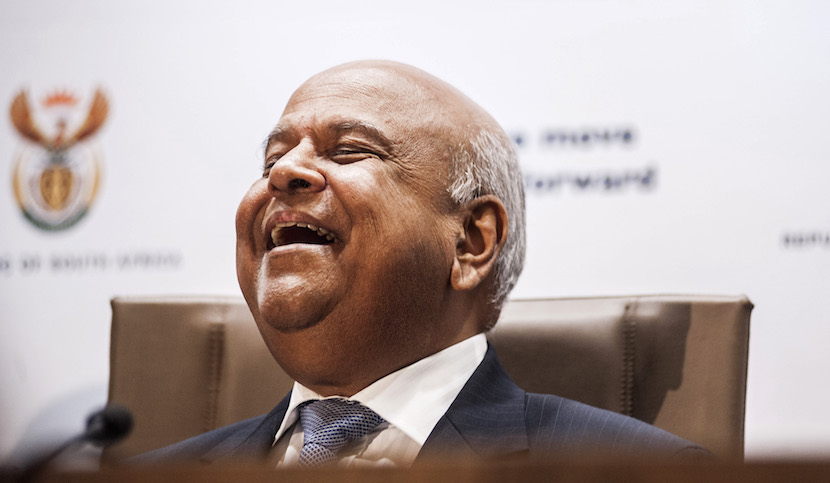 Every Government, like every business, strives to control public perceptions. Indeed, in countries where elections are held regularly, the very future of paid political leaders depends on getting voted back into office. So there should be no surprise to see the iron grip South Africa’s ruling political parties exercise over the public broadcaster – first the Nats, now the ANC. Similarly their financial support of “patriotic” media. But getting used to obsequious behaviour sows seeds of arrogance. It promotes a culture of media manipulation that soon evolves into propaganda. In normal democracies, business executives offer a counter-balance to such excesses of politicians. But racial imbalances created by SA’s history turns corporate leaders soft targets – easily branded as “racists” or “coconuts”. So voiceless business slowly withdraws, keeps its trapped cash in the bank and exports the capital it can. That has been the depressing trend of the past few years. Perhaps there’s a change in the offing, as MMI’s chief executive Nicolaas Kruger argues in this interview in Davos. Since the reappointment of Pravin Gordhan as Finance Minister, he says, the ice seems to be thawing. Hope Springs. – Alec Hogg

Yes, Alec. It’s my second visit to Davos and it’s still a fascinating place. I must say the second time is, I guess, much more interesting because you know what to do and where not to go but it really opens the mind and it gives you an opportunity just to reflect on many things.

Yes, that first time is a bit of a blur. There’s so much happening here but now you get into a bit of a stride. What jumped out at you this time round?

Look clearly, the world has significant problems in so many places and I guess we, coming from South Africa, and people back home often get a bit negative and so about South Africa’s own issues but when you look in the global context, I think we’re not unique. We’re not on our own. In fact, there are bigger issues in many other places, like the refugee crisis, for example, is a huge issue in Europe and terrorism is a huge issue. I guess we, in South Africa, don’t have those issues at this stage. I must say, I’m not too negative.

We have had an easy money ride around the world for some time and the tide is now going back, so even as Pravin Gordhan was saying, “It’s time to get our hands dirty. Start reforming.”

Yes, certainly South Africa has got some challenges but clearly it makes us reflect on a number of things and what I’m very positive about is, I guess some of the more recent interactions with the Minister of Finance and Business. We had a great breakfast just prior to coming to Davos, where we talked about challenges in South Africa but then also solutions. I’m quite positive about Pravin Gordhan himself and what I’m also sensing is a willingness to really, start engaging on many levels. Even the South Africa contingent here – I found the networking here fantastic. Not only the private sector and business but, also amongst the private sector people really, in a very relaxed environment, talk about solutions and to get onto the front foot, and get into the theme of the World Economic Forum. To talk about how the fourth industrial revolution applies to South Africa and how we can use the technology changes, robotics, 3-D printing and all these new things and how we can apply that in our own businesses back in South Africa, to make South Africa a better place and to make our businesses more efficient.

Just to dwell a little bit on the first point that you made of government/business relations. The fact that it is looking better now, does that reflect that there was a bit of ice in the past?

Yes, I think government and business has not been as close as they can be. I guess the trust – we need to work on the trust but I really sense a willingness to engage and dialogue and to talk about solutions. Really, certainly in Davos, we’re already talking about ‘team South Africa’ and we see each other with the South African scarves in many places. I guess, bearing in mind that they say there’s 250 different sessions and South Africans go to many different sessions, so in our own informal ways, we do play the South African role over here.

We’re also somewhat being isolated. For instance Christine Lagarde was asked about or referred to the BRICS and then she said Brazil, she talked about them, Russia, India, China – no mention of South Africa, and sometimes we think we punch a little bit above our weight. We need to perhaps, get our feet back on the ground.

Yes, certainly, that’s one thing that we’ve talked about and certainly, we would like to raise Africa’s profile a little bit more. Although there were Africa sessions, because of the other issues globally, South Africa is not getting the same airtime as in the past. Now clearly there’s the Regional African meeting in Rwanda this year, hosted by the World Economic Forum where the Africa issues will get airtime to that.

Are you going to that?

I’m certainly going to that and South Africa is part of Africa, so if Africa doesn’t get the airtime then I guess we get a little bit less. Certainly the global issues and the themes and so forth, skills development, risk management, global warming – all those themes apply to South Africa as well, so I think it is still very relevant to be here.

Nicolaas, the theme of the 46th World Economic Forum was the ‘Fourth Industrial Revolution’. Now, many industries are being targeted, including the asset management or wealth building industry with things like robo-advisors, etcetera. Is there anything that you’re going to take home that makes you encouraged or maybe discouraged?

Yes, I think we know about the trends but when you come here and you reflect. You’re just I guess, astounded by the speed of change. It’s just accelerating all the time. One issue that South Africa really needs to think about carefully is really the skills gap and to what extent jobs will be displaced by these technological changes. How we need to re-skill our existing workforces. We need to look at the education system of new people coming in but also re-skilling existing workforces and, also the changes in the culture of organisations. I found that very interesting, as with the inclusion of technology things change more rapidly. You need a different culture, a more flexible culture, more collaboration, and more soft skills. Those things are not necessarily taught in formal degrees so one of my take-outs is that the soft issues are even more important now in this era of technological changes.

You’ve had an advantage there because certainly Momentum (with the Laurie Dippenaar days going back decades) always concentrated more on that area. Looking back, do you think you were ahead of that curve?

Certainly. What is great is we inherited some great values, a values-based approach to running organisation from the FirstRand days to the RMB days, etcetera. That’s becoming even more important now. I think a far as that’s concerned, we’ll remain consistent in our focus and I guess we’ll apply it uniquely to what matters most for us i.e. to focus on the vision of MMI, which is to enhance the financial wellness of our clients.

What about the issues that you specifically would face in the financial service and particularly in your industry? They do look significant. In the past, it was thought white collar would be ignored by the next revolution. Now that’s not the case so much.

Yes. Certainly, we’re facing a number of challenges. The financial inclusion being one of the big challenges that’s getting a lot of airtime over here. Changes in the distribution landscape: you mentioned Rainbow Advice. We really need to think about that and the cost of distribution at the lower end of the market. Clearly, the market volatility globally impacting on us in the wealth management space… If China’s growth slows down then our asset values are impacted and clients want to know from us ‘what’s happening, and so it’s so interconnected. Our industry is part and parcel of the challenges experienced by other industries as well.

What about the block chain? I was listening to the CEO of PayPal who says that that is going to be a big part of the future. Clearly, that must be a threat to established financial services businesses.

Yes. I also attended one of the sessions where that was discussed and certainly, we’re going to reflect back home what the implications of that will be and how they could potentially disrupt businesses like ours. There are certainly opportunities as well. The compliance people talked about utilising that to really change the landscape of compliance significantly so there are threats and opportunities.

So you’ll go home, reflect, probably (if you’re like me) take six months to absorb all of this stuff, and apply it.

Certainly. I think it’s really a period of self-reflection. You’re taken out of your existing business. You reflect seriously about many businesses and you come back refreshed and you think more openly about things. Given that there are so many challenges, you really need to raise your game. You can’t be complacent in any way. That’s my only take-out that we need to raise our game to address the disruption by the Fourth Industrial Revolution and so I think it was worth coming here.

Nicolaas Kruger is the Chief Executive of MMI Holdings.