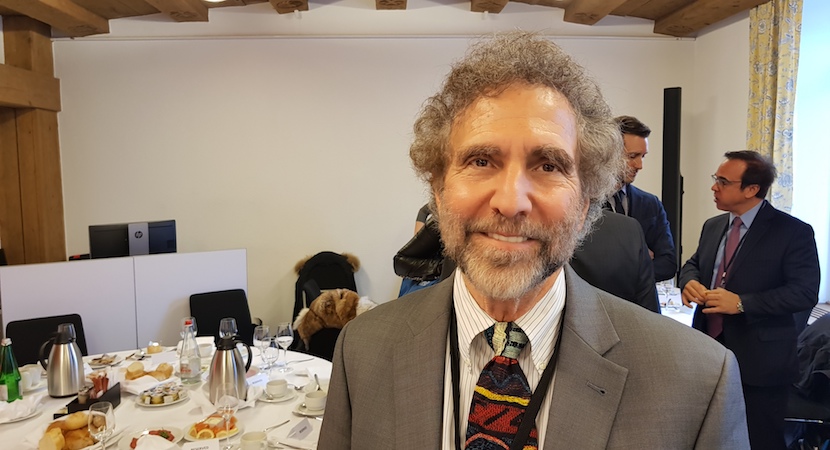 DAVOS — On Tuesday at the World Economic Forum in Davos, the U.S. News & World Report together with the likes of the Wharton School of the University of Pennsylvania unveiled the 2018 Best Countries report. The report measures countries as brands and looks at metrics such as safety, property rights and adventure. Switzerland ranks number one while South Africa scores just ahead of Argentina at 39. I was lucky enough to interview Professor of Marketing at Wharton, David Reibstein, who was instrumental in putting together the report. It’s a fascinating interview in which he shines a different light on where the world is right now. – Gareth van Zyl

This podcast was made possible by Brightrock, the company that introduced the first ever needs matched life insurance. I’m with David Riebstein. Tell us what you do?

I’m a marketing professor at the Wharton School at the University of Pennsylvania, and I teach marketing but I’m also very involved and the creator, together with US News and WPP, of the best countries in study.

Great, thank you David. Can you please explain how this report was put together and what some of your methodologies were?

Sure so, what it is that we’ve done is we’ve picked 80 countries, and the 80 countries were selected based on… We had certain criteria they had to fulfil in terms of foreign trade, foreign direct investment, and in terms of tourism – you had to be in the top 100 of all of those. That led us to the 80 countries that we have. In the top 100 of those over the last three years, any one of those years. We then did a survey of more than 21,000 people from around the world to rate each of those countries across 75 different dimensions. We looked at those particular ratings, we correlated those ratings with GDP per capita. That led to rates on each of those dimensions and then we did a ranking of the various countries based on that.

Is this the first year that the study has been done?

What is the importance of doing a study like this, measuring countries brands?

The way I think about it is I do a lot of work in branding and I think about companies that have brands and they invest in their brands not just because of ego but because it’s good business, and how is their brand for a company in good business – people are more willing to buy that product, if it’s got a good brand, and more willing to pay a higher price. How does that translate for a country? It’s that countries need to have good brands. What we see is that people are more likely to visit those countries. They’re more likely to buy products from those countries, and they’re more likely to invest in those countries so in the same sense a brand of a country contributes to the economy of a country in the same way that a brand of a product contributes to the economy of that product for that company.

Interesting, and looking at the rankings Switzerland is number 1. The US is starting to slip-down the rankings. What do you make of that?

As an American I am obviously disappointed with those results but I think people see the US brand as going down. Going down because of its leadership that it once had in the world, and because it’s becoming more isolated. So as they are moving more and more towards closing the borders to some immigrants coming into the country, and to some businesses coming into the country – it is viewed as less of a place to do business, not surprisingly. In terms of pulling out of the Paris accord it’s viewed as less of a citizen of the world so what I see is the US going down. When it really is an opportunity that the US should be seizing to try and move up in the rankings and help the US brand globally, and it’s the same challenge that every country has got. Unfortunately, the US is moving in the wrong direction.

I looked at the SA ranking and it’s 39. There’s a lot of factors in there that wouldn’t surprise many South Africans. We rank quite low on safety and inequality, but in terms of lifestyle, I think adventure, it’s a country that has a lot to do and a lot to offer for citizens, and the economy is sort of middle-of-the-road.

We rank just above Argentina but it is also climbing up the rankings so do you think that Argentina could overtake SA, seeing there’s been big political changes within Argentina?

So one of the things that we have to look at in terms of the South African ranking is everybody recognises SA as part of Africa and, overall, Africa is rated lower as a continent than any of the other continents, but within Africa, SA ranks the top country so that’s very good. To your specific question – Argentina has really been on the rise and I would not be surprised that SA is probably going to be surpassed by Argentina but still there’s a lot of opportunities for SA to rise on its own as well.

Looking at some of the other highlights of the study. One of the things that stood out was that people are trusting governments less and trusting businesses more. Is that not a dangerous dynamic?

Certainly it’s an interesting dynamic. How dangerous it is? I think in many ways it might be less dangerous and that’s because companies, for their long-time survival they’ve got to remain popular amongst the citizens. So they have a day-to-day accounting that they are responsible for and if they deviate, as you suggest is a risk, well then, they will immediately start seeing that on their bottom-line so there’s a correction factor that keeps them inline that governments don’t directly have.

One of the other aspects that you looked at was some personalities. So Donald Trump, for example, you measured his brand versus Oprah Winfrey, who recently made some interesting comments at the Golden Globes. What were some of the interesting highlights from that, especially regarding Trump’s brand, seeing as he’s going to be here on Friday?

Well Trump is not being viewed very favourably around the world. In fact, one of the biggest surprises to me… It didn’t surprise me the global perspective, but the perspective of Trump relative to other global leaders was shocking. Trump has had this campaign, which says, ‘Make America great again,’ and there’s no indication that he’s doing that in the eyes of the world. The question is, is he even doing it in the eyes within the USA? According to the data that’s not true either. So this is something that should be very concerning. One argument is that he’s just in his first year and maybe he can recover from that. Obviously there’s various different attitudes about that but of all the global leaders that we measured there was nobody who had a higher negative or dis-favourable rating than President Trump.

Who was the highest rated leader, I know that Macron rated quite highly?

Macron was very high but the overall highest rated one was Trudeau, and then Merkel was also very high. So Trudeau number one, I believe it was Merkel that was number two.

There seems to be some patterns there. These are leaders who are open to globalisation, and open to being connected with the rest of the world. Do you think that’s a fair observation?

I think one of the concerns is, there are people that care about the world rather than just the country. So the view towards Trudeau… Merkel, to a very large degree is the leader of Europe and concerned about the well-being of Europe. She’s got her own, self-interest in that because as Europe does well so does Germany. Macron also has more of a global view. They do it within their own particular country and I think that’s part of where President Trump suffers is because he is so internally focussed and viewed of less of a citizen of the world. Whereas those other three leaders are clearly viewed as having a more global perspective.

Thank you very much. It has been fascinating chatting to you today.

My pleasure, thank you.

This podcast was made possible by Brightrock, the company that introduced the first ever needs matched life insurance.