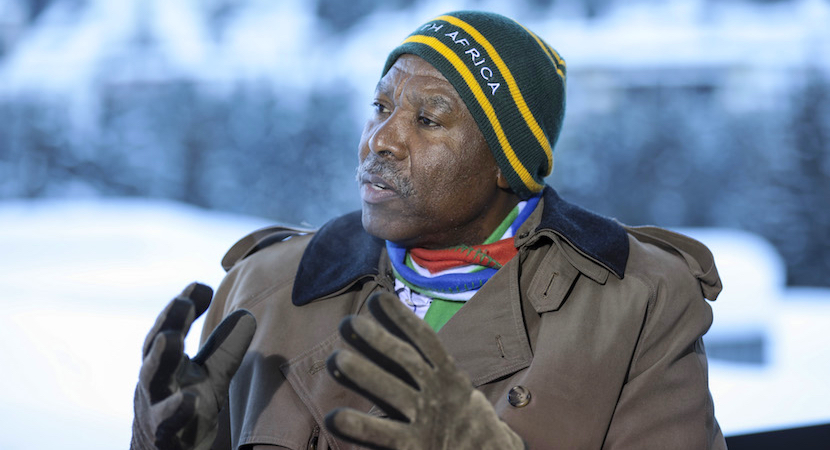 DAVOS — Reserve Bank Governor Lesetja Kganyago appears to think the worst is behind South Africa in terms of economic stability. Speaking to Bloomberg Television (and republished here with permission), Kganyago said that the era of corruption and misrule are over and that inflation is approaching the midpoint of its target, helped by the stronger rand. The rand today, of course, dipped below the psychological marker of R12/$ to hover around R11.90. After a decade of Zuma’s rule, South Africa, unfortunately, has fallen behind its global peers and has a lot of catching up to do. Hopefully, the current positive momentum can grow stronger. – Gareth van Zyl

Amin: Governor, the South African rand has just broken 12 to the dollar what do you make of where it is right now? Are you comfortable where the rand is?

Kganyago: What matters for us is trends. We do not watch the daily movement. We are a central bank which targets inflation, we do not target the exchange rate. The exchange rate is a very important input into the price formation process in South Africa. I think what we need to be asking is, what does the strength of the rand reflect? What is different this year from what we were last year? We were sitting on exactly the same roof last year when I was trying to convince you and the viewers that South Africa has got solid institutions and that these institutions have stood us in very good stead. They have demonstrated that what you have seen since December in South Africa has been a resurgence in confidence both business confidence and market confidence and that is what the rand is beginning to reflect.

Amin: Having said that, the economy remains fragile. We saw a rate cut recently. Is there need for another to help boost the economy?

Kganyago: Well certainly the economy is fragile, or let me say the growth is fragile rather than the economy which is based on very solid fundamentals. We have revised our growth projections this year from 1.2 to 1.4 and I did know that the IMF had revised their growth downwards. Actually, with time we think they will discover they will have to revise their growth upwards. In the monetary policy meeting we left rates the same. We had to balance the risks and we had said that based on the policy horizon we have we felt that appropriate monetary stance to take was to leave rates as they were.

Amin: Where will rates be in 12 months do you think, given the fundamentals that you talked about earlier? Is there no need to look at another rate cut?

Kganyago: We are not targeting interest rates. We are targeting inflation. What is the most recent inflation outlook? We actually saw that the inflation rate is closer to the midpoint of the inflation target rate, that is where we would like to see it, but yesterday’s inflation, today’s inflation, does not mean much, as much as what inflation is over the horizon and over the next 12 months we still see inflation closer to five percent than closer to the midpoint of the inflation target rate but that determines the future path of the interest rates is, what the inflation rate outlook looks like and what the growth outlook looks like. So we take every meeting as it comes and unfortunately I will not be in Davos in March, but when I talk to your colleagues in March, I will be able to tell them what is happening with rates at that time.

Amin: The mandate of the central bank has been under a lot of pressure over the past year. Are you concerned that the ANC has ratified to nationalize the central bank? How independent can you be?

Kganyago: Two things that you have got to distinguish. A careful reading of the resolution of the ANC says that the independence of and the mandate of the reserve bank needs to be protected but the reserve bank must be transferred to public ownership. It has happened the world over. Many central banks were initially in the hands of private shareholders but transferred to public ownership. Our central bank is not owned by private shareholders but it happens to have participation of private shareholders. The bulk goes to the government. Whether the government nationalizes the central bank believes it as it is, for us, the mandate is enshrined of the constitution of South Africa must be protected. Whether the central bank is in private or public ownership, the important thing is what happens to the mandate. It is always useful for us with a diverse board with people with experience in mining, finance and so on who bring interesting perspective on governance. But they have got no say on position of bank.

Amin: What is the risk of a downgrade and how much more difficult would it downgrade be for you to fulfil your responsibility?

Kganyago: Two important things. One is that South Africa is in a better state now than when it was. I think that we have a good case to make about the strength of the South African credit.

Amin: Despite corruption, despite misrule?

Kganyago: Corruption and misrule will be history. You have seen that institutions of our democracy are now acting in terms of the constitution. You have seen a reassertion by the parliament of the republic of South Africa to hold their executives to account, to hold their public servants to account and that is what the constitution of the republic of South Africa tasked the parliament with and parliament is finally playing the role it is supposed to play. More importantly is that the other institutions of our democracy, the judiciary, the independent electoral commission are all action according to the constitution. And with the respect to them, when those actions are taking place *inaudible*

Amin: What is, governor, the biggest risk to South Africa’s recovery?

Kganyago: The biggest risk to South Africa’s recovery — there are two we need to take into account. The first is a cyclical recovery. That cyclical recovery is underway, bolstered by the rise in business confidence and last year at this time in Davos, I was trying to look for people to talk to and convince that South Africa is worth investing in. This year, I having a lot of people come to me saying, “hey, it looks like a lot of things are changing in South Africa. Where are the opportunities?” I am saying to you South Africa is reasserting itself. And not just as an investment opportunity but as a destination for investment.

Amin: Governor Kganyago, thank you for your insights today. We saw the Rand breaking 12 per dollar. We continue to watch that space.