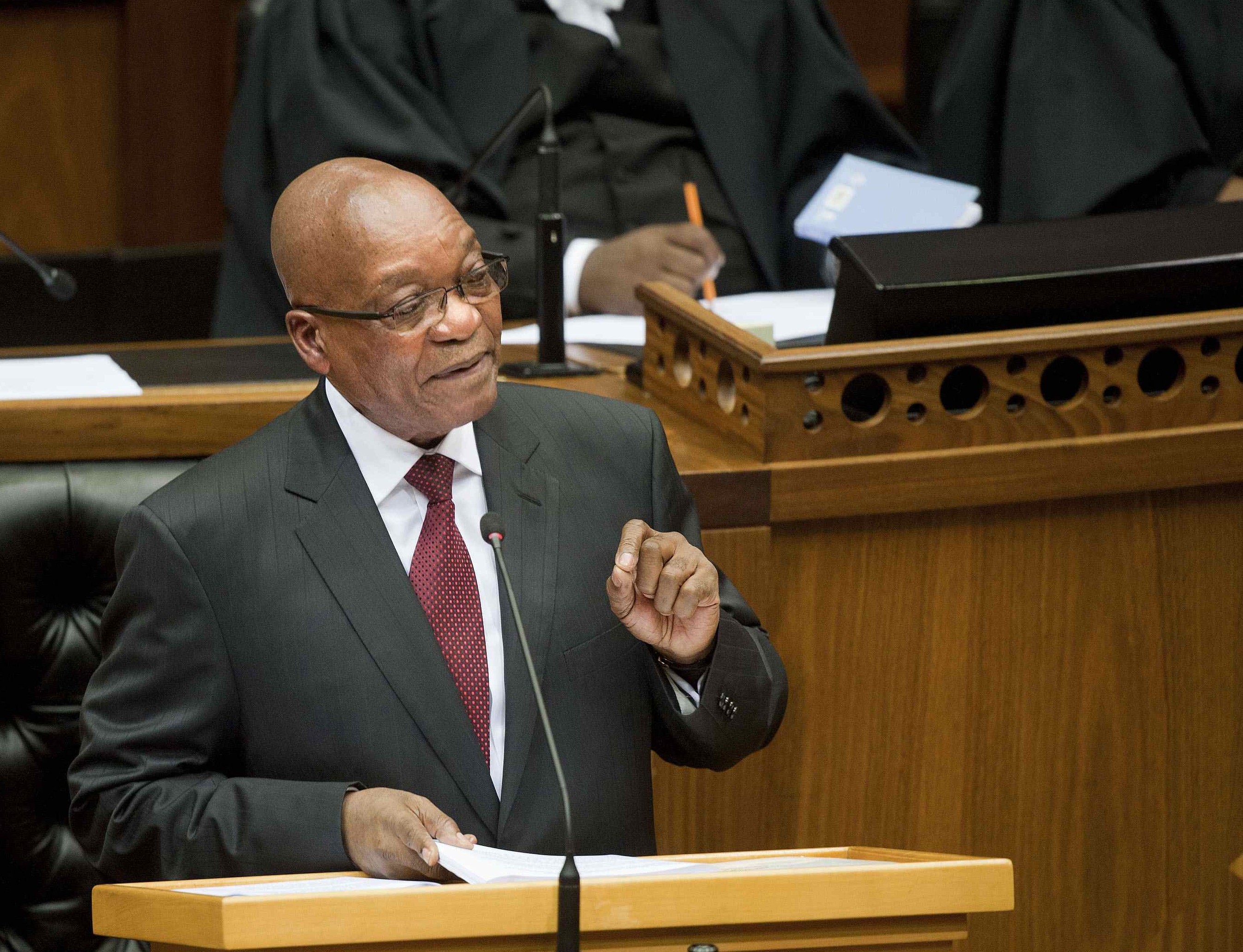 In the well researched and easy to read assessment, Rhodes scholar Kameel Premhid of the Helen Suzman Foundation unpacks the background to and consequences of the EFF’s dramatic “Pay back the money” chanting in Parliament yesterday. The response of the ruling ANC also reflects the dramatic change we’re witnessing in South Africa’s political landscape. Both events, Premhid shows, do not well bode well for the future of South Africa’s Parliamentary Democracy. Perhaps it also reflects how embarrassing President Zuma has become to the ANC after his continued refusal to admit responsibility for a R200m transfer from the public purse into his personal homestead. – AH

The launch of the EFF has heralded a fundamental shift in our democratic politics. Since 1999, with the maturation of South Africa’s democracy, the ANC has only faced significant opposition in the form of the DA. Although ANC support heavily outweighs that of the DA, the latter has benefitted from being the only ‘real’ opposition force in the country. The EFF’s emergence changes all of that. The DA now has to work harder to ensure it maintains its pride of place as the country’s official opposition. For the ANC, the EFF is a direct threat to its virtually hegemonic stranglehold on black political support.
The EFF was founded in the aftermath of Julius Malema’s expulsion from the ANC. Malema, who infamously said that he would ‘kill for Zuma’, was expelled, no doubt, for becoming a rival to the man whose cause he once championed. Although slow to accept his ousting, Malema’s decision to continue upon a political career outside the ANC was, depending on who you believe, either foolish or brave. What it has proven to be, however, is nothing short of extraordinary.
Unlike the Congress of the People (COPE), which was derided as being a ‘nicer,’ more acceptable, version of the ANC, Malema has sought to distinguish fundamentally the EFF from the ANC not in a manner constrained by the political settlement reached in 1994. In effect he has brought the ANC’s radical rhetoric and action mismatch into sharp focus.
The consequence of this is that Malema has effectively re-characterised South Africa in ‘establishmentarian terms.’ As the EFF’s argument goes, the ANC has been co-opted into a largely white elite/insider group but black people, the masses, remain on the outside.
It is not difficult to understand why. Despite our wondrous political transition, black people still bear the historical brunt of Apartheid. Black people, and black women in particular, continue to be our least economically empowered, and most vulnerable.

By painting the negotiated settlement of 1994 as a protector, rather than reformer, of white privilege; and then taking aim at it, Malema has put the EFF on the side of ‘the people.’ In turn, the ANC and the DA are made to sit together, on the side of the well-off. Rather than the usual racial slinging match that ensues between the ANC and the DA, and which has hitherto dominated our politics, Malema and the EFF have started shifting our focus to issues of class. He has clothed himself, and the EFF, in the zeal of anti-establishment politics [1].
By dressing in maids’ outfits and miners’ boiler suits, the EFF seek to (aesthetically) remind us of who their core constituency is: the downtrodden, vulnerable, and excluded, masses. Thus, even though the EFF sits at the centre of power, and benefit from it, their actions, no matter how ‘distasteful’ or ‘disruptive’, are clothed in a legitimacy far larger than themselves. It does not matter that the electoral results put them in third place; the deliberate narrative of being a radical pro-poor party allows them to speak uniquely to, and on behalf of, millions of South Africans who increasingly feel excluded from our political life. By straddling both anti- and pro-establishment politics, the formal and the informal, the EFF represents a threat to politics; a threat that will, over time, become more vivid [2].

By grouping the ANC and the DA together, Malema and the EFF has put both parties on the back foot.
The ANC’s ability to use the language of revolutionary change while delivering glacial change puts it under pressure. The ANC now has to spend more time explaining the intricacies of government policy and why seemingly arbitrary and supposedly ‘anti-transformational’ concepts such as the rule of law matter. In spite of its own revolutionary tendencies, the ANC knows full-well that it is bound to a degree of credible action by the law and the market.
By contrast, the DA faces a crisis of confidence. On one hand, the party must see the EFF’s left-leaning politics as the anathema to its existence. In its eagerness to defeat the EFF, and protect the interests of its relatively well-off core constituency, even the unthinkable – working with the ANC – becomes viable. But, the DA also knows that in choosing to work with the EFF it can also increase the pressure on the ANC and greater erode its political dominance. However, neither of these strategies seem to be viable options [3] [4].
Rather, in a desperate attempt to silence the EFF – and censor their powerful politics of symbolism – the ANC has made much about ‘appropriate dress.’ Through its deployed Speakers around the country, EFF representatives have been booted out of legislatures on the flimsiest of grounds. While this may be expected from an increasingly nervous ANC, it is disappointing that the DA would allow such an erosion of freedom of speech, and dress, on its watch. While the EFF is not without blame – as it acts provocatively for effect rather than meaning – the distaste of their actions cannot be used as a proxy to undermine free speech, which is a crucial ingredient in the mix of ideas that Parliament should cater for.

So, what does one make of Parliament, the ANC, and the DA’s handling of the EFF’s robust language and red overall dress?
Our Courts have interpreted section 16 of the Constitution (the ‘Free Speech’ clause) liberally. It has done so with respect to both spoken and depicted words.  Indeed, our Courts have deliberately sought to protect the freedom of speech, even when provocative and discomforting, because of our own unique history. Free speech has, and always will be, an important political tool in the arsenal of opponents of any government to speak truth to power. That generous benefit is given to people even if they choose to abuse or not use it. Indeed, the limitations on free speech are so few, and are themselves so exacting – South Africa is considered to be a place where people should have the benefit of speaking their mind, rather than remaining silent.
This is particularly the case with respect to Parliament. As the country’s foremost debating chamber, where questions of policy and national importance should take centre stage, one would imagine that there would be fewer limitations on free speech. The closer one is to the centre of power, the greater the need for more frank and robust debate [5].
Thus, while the Constitution permits Parliament to determine its own rules, our Courts have been at pains to emphasise that such entitlements do not mean that Parliament can depart from what the Constitution itself deems appropriate [6].
In the de Lille case, for example, when Patricia de Lille divulged the names of 8 alleged spies during proceedings was regarded as unparliamentary, the Supreme Court of Appeal found that the attempt to punish her was unlawful.
Likewise, in Ambrosini, the Constitutional Court held that where the Constitution provides a particular entitlement to an MP – in this case, the right of a Member of Parliament to propose legislation – then no arrangement of the House, nor its rules, can abrogate from that entitlement. The Constitutional Court reaffirmed this principle in its ruling in Mazibuko, which found that Parliament’s failure to facilitate the tabling of a motion of no confidence against the President within a reasonable time period, to be unconstitutional.
The EFF have, rightly, decided to take their ejections on review [7]. There is no question that despite Parliament enjoying a certain degree of isolation from ordinary legal proceedings, such as remarks within the House not being liable to defamation proceedings, the Court has intervened where the conduct of Parliament, through the Speaker, has fallen foul of Constitutional guarantees.
These rulings will be important because limiting politically discomforting speech can ultimately silence the voices of opposition MPs. With respect to what constitutes ‘parliamentary dress’ [8] courts will have made an important finding on whether such rules, which are seemingly used as proxy reasons to snuff out the EFF, are sustainable in an open and democratic society.
The outcomes of these challenges will be important as they will further define our understanding of constitutional supremacy and parliamentary privilege and how they relate to each other. Even though rulings of Speakers are not bound by the precedent of previous Speakers – unlike, for example, our courts – these rulings will add to the others mentioned here which can form the basis of future reviews. The impact of all of these rulings taken together is that they will have the impact of disciplining the Speakers Offices into acting more as a neutral arbiter, rather than as a political extension of the ruling party.

The events of 21 August 2014 demonstrate the problem exactly. At Question Time, Parliament descended into chaos. Julius Malema and his party were ostensibly attempting to hold President Zuma accountable over Nkandla. However, the deliberately provocative manner in which they chose to do so yielded the worst result. Not only were House proceedings suspended, with the President escaping proper scrutiny, but Parliament was, yet again, prevented from doing what it was supposed to do.
While it may be admirable that parliamentary proceedings receive more attention, if it comes at the cost of its ability to function, then we have to wonder whether it is worth it. This is especially the case where the knee-jerk reaction of the Speaker is to attempt to shield the President and clamp down even harder on free speech.

Indeed, being more tolerant of the EFF will strengthen Parliament as an institution. The ANC will be able to test the EFF at a policy level [9], and not allow it to play the victim card as it does now. The DA should ensure that free speech is a firmly protected principle. Indeed, should they fail to do so they should be careful that they are not next. And, lastly, the EFF will be able to properly exercise their mandate and help get things done [10]. After all, they were elected to represent their voters, not be kicked out all the time for their sartorial choices and loquacious style. Anything else will undermine Parliament as an institution – and we, the voters, will ultimately suffer.
* Kameel Premhid is a Research Fellow of the Helen Suzman Foundation, previously having worked there as a Researcher. He holds a BA and LLB from the University of KwaZulu-Natal and is currently reading for a postgraduate degree at Lady Margaret Hall, Oxford, as Rhodes Scholar.