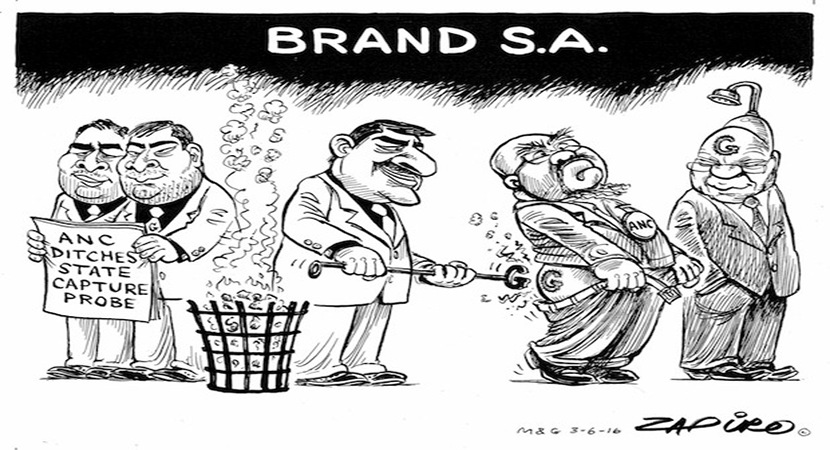 South Africa’s ruling ANC is more of a movement than a traditional political party. My favourite comes from an insider who described it as being like your favourite sports team – it’s totally acceptable to criticise the coach and the players, and even agitate publicly for their replacement. But even in the worst of times, you don’t switch support to another side. What that means for the efficient operation of a multi party democracy is a moot point. But it’s the right context in which to view August’s Municipal elections where a more likely threat to the ANC is a low turnout rather than mass swings to the opposition. It provides perspective also to the strongly worded statement from the ANC’s ally, the SA Communist Party, after its weekend get-together. The SACP’s position illustrates how, within the movement, voices against the worst of the Zuma Administration’s abuses have not fallen silent. And that despite many powerful members of the ANC wanting him gone, Finance Minister Pravin Gordhan is able to rely on the support of some strong partners. – Alec Hogg

Johannesburg – The SA Communist Party has criticised the ANC for not further pursuing investigations into allegations of state capture.

The SACP’s central committee met in Johannesburg over the weekend and issued a statement on Sunday.

“We believe that it is misguided… for those in the ANC’s leadership who now seek to dismiss concern about corporate ,” said the ANC’s alliance partner. “It is also misguided to believe that raising this issue is a distraction from the ANC local election campaign.”

On Tuesday, ANC secretary general, Gwede Mantashe, announced that the ANC had decided to close an investigation into state capture, branding it a “fruitless exercise” because of the low number of submissions.

Former government spokesperson, Themba Maseko, was the only one to hand in a written submission out of the eight who had originally complained to Mantashe.

Previously, Deputy Finance Minister Mcebisi Jonas has publically declared that members of the Gupta family had offered him the job of finance minister before Nhlanhla Nene was sacked in December 2015.

The Guptas denied this at the time, saying their family was being used for “political point scoring between rival factions within the ANC”.

On Sunday, the SACP said that it “certainly agree[d] that neither the ANC nor government are corporately captured in their entirety – but the problem is widespread, and threatens to become endemic”.

The party said “parasitic corporate capture” needed to be tackled “head on”.

Nzimande: On state capture, mass action important not palace consultations and engagements. Those are not going to solve the problems #SACP

Turning to the Gupta family, specifically, the SACP said the family was “involved in the most brazen forms of buying political influence and of even directly seeking to usurp executive powers”.

The party also said the Guptas were not the only guilty parties and that it was currently involved in “exposing… other instruments of parasitism”, as well as “defending Treasury, without simply becoming the cheerleaders” for “factions of monopoly capital”.

Finance Minister Pravin Gordhan had spoken at the committee meeting, and the SACP said it had now “pledged” to actively support the minister.

Earlier this week, the Congress of SA Trade Unions – the ANC’s other tripartite alliance partner – said it would respect the ANC’s decision to close down the investigation.

“There was no evidence and the ANC cannot open an investigation forever. It’s an NEC decision and we must respect it,” labour federation’s president, Sdumo Dlamini, told News 24 at the time. – News24