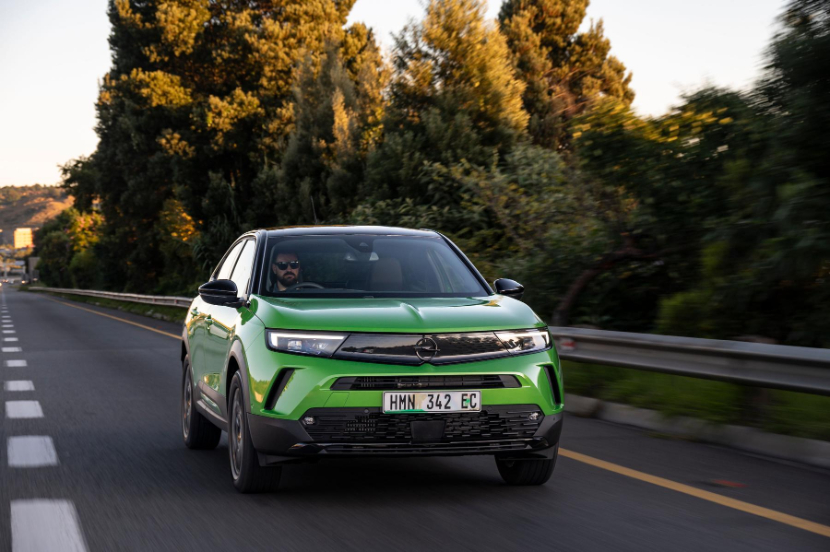 The new Mokka was launched in April this year and it says something about it’s popularity that it’s taken a while to make its way into the hands of yours truly. I remember at the launch being impressed with the 1.2l turbo motor and it’s pairing with a smooth shifting 8 speed automatic gearbox coupled with a sporty ride.

At R530k this GS version, in red, breaks the psychological half a million Rand barrier for what is a compact SUV with sporty aspirations. The previous Mokka didn’t really created much of an impression in the segment so this is an important car for Opel if it wants to change that.

Up here in sunny yet cold Johannesburg my aforementioned first impression extended well beyond a few kms behind the wheel. The Mokka is sprightly enough when driven in civilised fashion but the engine volume does become a little tiresome when used enthusiastically. The automatic gearbox is quick, responsive and the gear ratios use the available engine torque well.

The Mokka corners like it is on rails to the point where it had me wondering where it was getting all its grip from. It just held, and held and when you thought it was going to fall over it held some more. Sticky Michelin tyres on the 17 inch wheels no doubt helped the cause while the suspension that helped keep everything in check is firm without being uncomfortable.

There are a few quirks on the car such as when cranking the volume up on the steering wheel button you have to click it up one notch at a time because holding it up doesn’t auto level up the volume for you. It is such a small issue the only reason I mention it is because you’re going to be doing this a lot – the sound system in the Mokka is a surprisingly good 6 speaker affair that plays at full volume without imploding your ears and without distorting and rattling all the panelling in the car. I could not pick up an errant rattle or vibration. Music is crisp, clean, detailed and accurate and whilst an additional sub for some lower end reach would round it off neatly the Mokka’s music system is one that I really did enjoy and used extensively.

The digital dashboard is excellent in both resolution and customisation. Of course with 10” for the infotainment and a further 12” for the main instrument console the Mokka’s “digital declutter” claim is perhaps one that I can only classify as being a work in progress. The intention is great and you can go minimalist to an extent on the instrument display but to be honest I’m not sure I really want that. I like knowing everything that’s going on – it’s in my nature and frankly the more the better for me. This is not to say anything was lacking in my list of wants and needs for information flow from the car.

The equipment and safety lists are exhaustive. Wireless charging, massaging driver’s seat and heated seats. Front collision warning with auto braking and rear camera birds eye and 180 degree panoramic view allows you to reverse whilst being able to see what’s coming – a feature that is hard to let go once you’ve had it. You get anti dazzle high beam headlights assistance which is a way of saying that the Mokka trims your high beam lighting to as not to dazzle oncoming vehicles whilst still providing you with lighting to see the sides of the road. It does this by understanding which parts of the headlight to turn on and off and at this pricing point it’s a feature that I’ve only seen on far more expensive cars.

The GS model on test boasted adaptive cruise control and it is top drawer stuff. It’s easy, intuitive and reassuring on the open road. In traffic it just requires a nudge of the throttle to take off and it will carry on for you after that. In highway conditions it is a pleasure to use and I found it to be accurate and quick to respond to changing conditions ahead of you.

I loved the Mokka. It might sound expensive at just the wrong side of half a million Rand but it has creature comforts in abundance. But most of all I loved it because of the way it drives. It has enough power, superb road manners and it handles with inspiring confidence to the point where getting out of it leaves you satisfied but getting into it builds eager anticipation. Did I mention that it looks good too?

There is an excitement back in the Opel stable and it’s come from quite possibly the most unlikely of places.