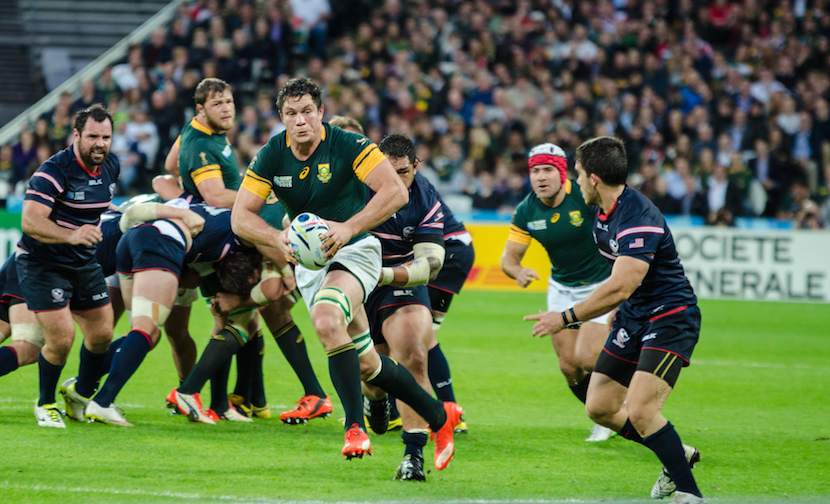 On Friday, Mail & Guardian rugby writer and SuperSport commentator Andy Capostagno provided the reason Bok coach Allister Coetzee was forced to backtrack on his decision to delay naming his captain until he had a chance to look at his squad. It seems SARU’s marketing department insisted on the captain being named immediately because the sponsors needed to have their branding ready for the series against Ireland. Money talks and that’s why a news conference was swiftly convened to unveil Adriaan Strauss. It seems Coetzee wanted his old Stormers captain Duane Vermeulen in the mix, but Vermeulen’s club Toulon dug in their heels threatening not to pay Vermeulen his June wages if he played Bok rugby. As Capostagno points out, there is now more money to be earned from playing club rugby in Europe than there is from playing for the Boks. It’s a conundrum facing any overseas-based player who gets a Bok call-up. Do they go for the glory of representing their country, or is the Euro worth more in a career that’s always short-lived? In any event, SARU might end the problem by simply refusing Coetzee permission to call up the overseas players. Certainly neither SARU nor Coetzee want an embarrassing situation in which they pick a player who subsequently snubs them because it makes financial sense to do so. One of the overseas players in the squad is Bath’s Francois Louw, who admits to being slightly surprised by the Bok call-up. – David O’Sullivan

Cape Town – Francois Louw understands Allister Coetzee’s decision to back locally-based players over overseas-based players, but he still believes that the experience he has gained playing for Bath will benefit the Springboks.

Those players arrived in Cape Town on Sunday, a week after the rest of the squad had assembled in Stellenbosch for their first training camp together.

There has been no formal instruction from SA Rugby preventing Coetzee from picking overseas-based players, but that could be the direction things are moving in after SA Rugby president Oregan Hoskins confirmed back at Coetzee’s unveiling in April that the existing policies would be re-evaluated.

Louw, who was a key figure in the Boks’ 2015 World Cup campaign, said he had given the issue some thought.

“It is tough … playing for the Springboks is the ultimate. I’m very grateful and fortunate and honoured to be back here again … I don’t think it’s ever a given, it definitely hasn’t been for me,” the 30-year-old told media from the Bok hotel in Cape Town.

Read also: Garth April – a Bok star in the making?

“I obviously play my rugby overseas and I’ll have a view on that.

“I definitely believe it’s brought the best out of me as a player. I think I’ve grown substantially, not just on the field but off the field as well.

“Those skills and attributes, I definitely bring back into the side (Boks).

“I can understand the reasoning behind wanting to select domestically-based players as well.

“It’s out of my hands at the moment. I’m playing my rugby over there and if I do get the chance to play for the Boks I’ll obviously give it everything I have.”

Louw acknowledged that, following the 2015 World Cup, he was not certain that he still had an international future.

“Ja, of course. You never take this for granted,” he said.

“It’s very special to be included and you never know what’s going to happen in the future.

“With rugby, you can only look so far ahead. You can sign whatever contract you want but your career can end pretty quickly. The one thing you can control is the effort you put in.”

But a conversation with Coetzee last month put things back on track.

“The coach spoke to me a few weeks ago … asking what my future was and if I still saw myself wanting to be available for Springbok selection,” said Louw.

“It was a very easy answer and I’m very grateful to be included once again. It’s a tough task at hand and I think we all know that.”

Coetzee said he did not want any of his three overseas-based players to worry about policy.

“The focus for the overseas-based players now is really to focus on what’s coming on Saturday,” he said.

“We are busy at SA Rugby to formulate policy and when we’re ready that will be communicated timeously to the players and the media. But that is not the focus at the moment.”

The first Test will take place at Newlands on June 11. – Sport24