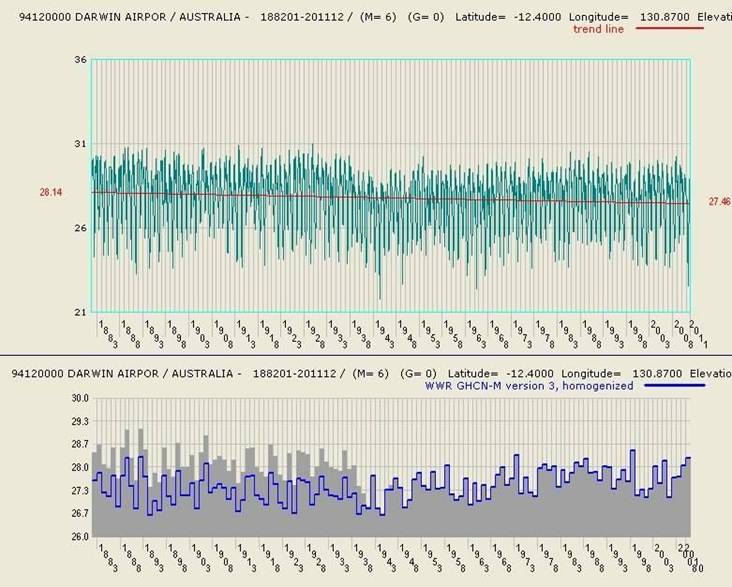 I’ve often wondered how much science lay behind the “fact” of Global Warming. For one thing, why did nobody pay much attention until an emotive politician (Al Gore) rather than a scientist picked up the cudgels? For another, why do environmentally well-informed societies like the US and Australia reject the otherwise blanket acceptance of the argument? Trading carbon taxes is already a huge business that’s becoming ever bigger. And billions of taxpayer dollars have been invested around the world in renewable alternatives. The South African taxpayer is about to be presented with another hefty “clean energy” bill through the proposed Russian-built nuclear power station fleet. It all seems too convenient for the vested interests who will cash in through the swing from “dirty” power. As they did when the supposed hole in the ozone layer was about to fry us  (remember that?) and a number of other scarey issues like Y2K (ahem) turned out to be mis-infomed. Data guru Krzysztof Wojciechowicz gives us more food for thought in this fact-based contribution which shows the earth is actually going through global cooling, not warming. – AH

The topic of “global warming” has serious implications for electricity in South Africa as most of our energy comes from coal. Our political masters are not sufficiently educated to understand this problem.

From the beginning it struck me how similar it is to the previous scare of  ‘ozone hole’. This, however, soon disappeared after billions of dollars had been spent on replacing fridges and air-cons. Global warming is a longer term swindle – analysts predict that in a few years turnover of Carbon Exchanges will surpass that of  the world’s Stock Exchanges.

No wonder all the tricks have been employed to mislead the global opinion. At the time of Durban Conference, the media found a good marketing gimmick – disastrous floods in Natal which killed many squatters. Global warming and the resulting heavy exceptional rains were hold responsible.

A similar trend was registered in:

Many stations on the southern hemisphere registered long term global temperature drop. I found the same negative trend in many American and other weather stations.

And I also found that the official ‘global warming’ figures were based on the most convenient time period – measured from the trough of previous temperature cycle to the peak of the present one. This method can prove anything. For example, the longest existing weather station De Bilt shows the temperature increase of 1.51 C. over the last 309 years, but a drop of  0.3 C. over the last 160 years.

And I found falsified, so-called ‘homogenized’ figures. I managed to download a set of original data collected by WWWR GHCN, and the same set of data, later ‘homogenized.’

Hundreds of weather stations were treated in this way – please see one example:

I wrote a computer program to analyze hundreds of these ‘adjustments’. The blue line shows past history ‘homogenized’ in such a way as to prove global warming.

At the time of the Warsaw Conference the heavens again tried to help the global warming believers.

“The devastation caused by Typhoon Haiyan cast a gloom over U.N. climate talks that kicked off Monday in Poland as the envoy from the Philippines — where thousands are believed to have died when the cyclone made landfall Friday — broke down in tears and announced he would fast until a ‘meaningful outcome is in sight.’ Naderev “Yeb” Sano’s emotional appeal was met with a standing ovation at the start of two-week talks in Warsaw where more than 190 countries will try to lay the groundwork for a new pact to fight global warming.”

There are not many long term climate stats for Philippines but I found one weather station Dagupan, which shows an average monthly temperature drop of  0.63 C. over the last 64 years.  So much for global warming!

I sent this graph to the newspaper, but it was never published.  Similarly, my letter to the press at the time of Durban Conference, was never mentioned.

It is possible that this ‘controlled madness’ concerning global warming may discourage the development of electrical power in our country, which is mainly based on coal.  I think the media should put the problem in a right picture.

* Statistics guru Krzysztof Wojciechowicz retired as Director Statistical Analysis at the DTI. You can reach him atkrzysztofw@mweb.co.za. His website address:http://www.econostatistics.co.za/index.html