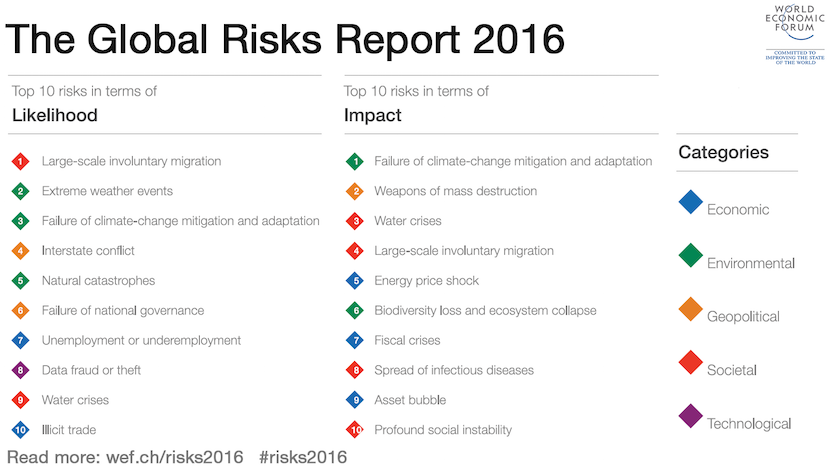 The World Economic Forum released its Global Risks Report 2016 ahead of the forum to be held in Davos next week. The report features perspectives from nearly 750 experts on the perceived impact and likelihood of 29 prevalent global risks over a 10-year timeframe. The risks are divided into five categories: economic, environmental, geopolitical, societal and technological. The panel below discuss the report, and include Adrian Monck, Head of Public Engagement and Foundations, World Economic Forum (moderator), Margareta Drzeniek Hanouz, Head of Global Competitiveness and Risks, World Economic Forum, John Drzik, President, Global Risk and Specialties, Marsh, Espen Barth Eide, Head of Geopolitical Affairs, World Economic Forum and Cecilia Reyes, Chief Risk Officer, Zurich Insurance Group. It’s a daunting, yet fascinating discussion, which should spark next week in the Swiss Alps. – Stuart Lowman

From the World Economic Forum

London, United Kingdom, 14 January 2016 – An increased likelihood for all risks, from the environmental to society, the economy, geopolitics and technology, looks set to shape the global agenda in the coming year, the World Economic Forum’s Global Risks Report 2016 has found.

In this year’s annual survey, almost 750 experts assessed 29 separate global risks for both impact and likelihood over a 10-year time horizon. The risk with the greatest potential impact in 2016 was found to be a failure of climate change mitigation and adaptation. This is the first time since the report was published in 2006 that an environmental risk has topped the ranking. This year, it was considered to have greater potential damage than weapons of mass destruction (2nd), water crises (3rd), large-scale involuntary migration (4th) and severe energy price shock (5th). 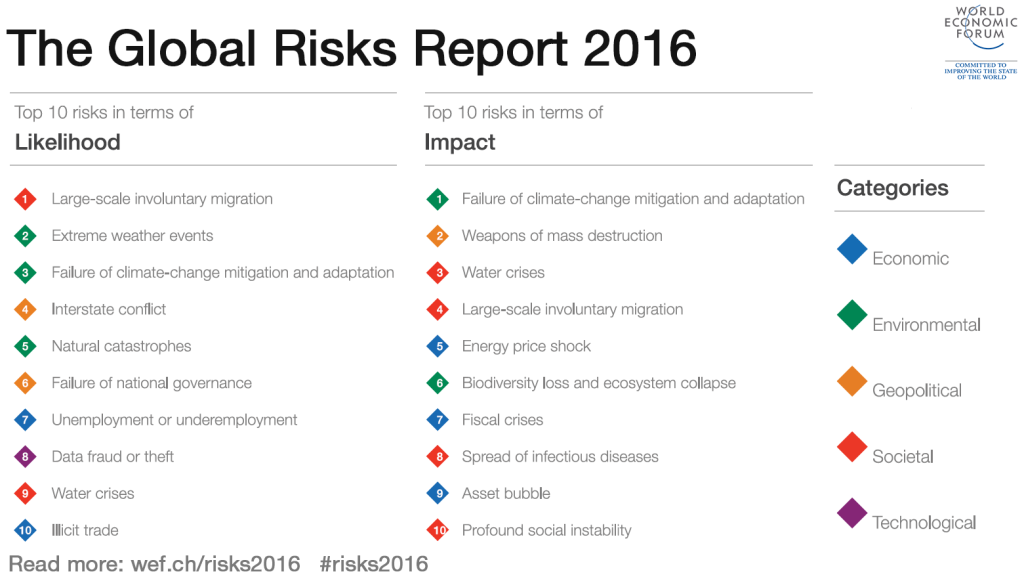 Such a broad risk landscape is unprecedented in the 11 years the report has been measuring global risks. For the first time, four out of five categories – environmental, geopolitical, societal and economic – feature among the top five most impactful risks. The only category not to feature is technological risk, where the highest ranking risk is cyberattack, in 11th position in both likelihood and impact.

This diverse landscape comes at a time when the toll from global risks would appear to be rising. Warming climate in 2015 is likely to raise the global average surface temperature to the milestone of 1°C above the pre-industrial era for the first time. The number of people forcibly displaced in 2014 stood at 59.5 million according to UNHCR, almost 50% more than in 1940. Data from the report appears to support the increased likelihood of risks across the board, with all 24 of the risks continuously measured since 2014 having increased their likelihood scores in the past three years. 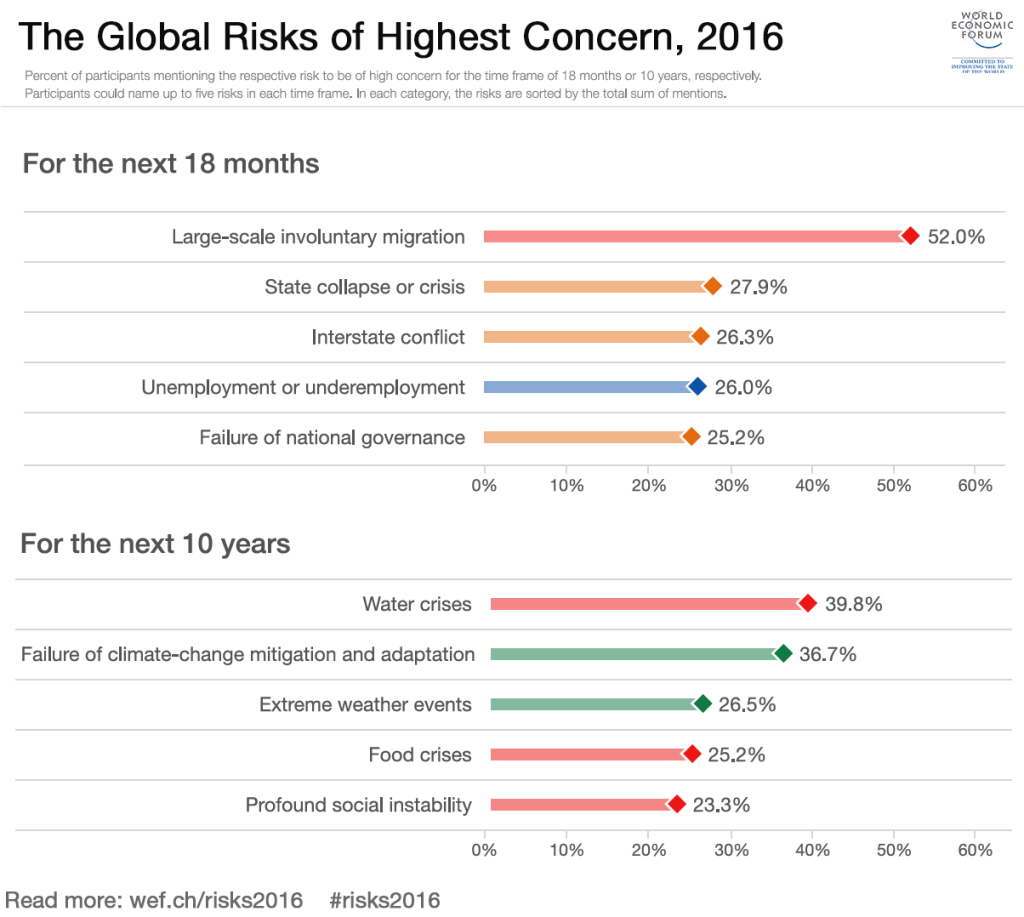 Knowledge of such interconnections is important in helping leaders prioritize areas for action, as well as to plan for contingencies. “We know climate change is exacerbating other risks such as migration and security, but these are by no means the only interconnections that are rapidly evolving to impact societies, often in unpredictable ways.

Mitigation measures against such risks are important, but adaptation is vital,” said Margareta Drzeniek-Hanouz, Head of the Global Competitiveness and Risks, World Economic Forum.

Which panic button to press?

Environmental risks have come to prominence in the global risks landscape in 2016, despite the presence on the horizon of a large number of other, highly visible risks. Income disparity, which was highlighted by the report in 2014, is this year reflected in the growing interconnections involving profound social instability and both structural unemployment and underemployment and adverse consequences of technological advances.

“Events such as Europe’s refugee crisis and terrorist attacks have raised global political instability to its highest level since the Cold War. This is widening the backdrop of uncertainty against which international firms will increasingly be forced to make their strategic decisions. The need for business leaders to consider the implications of these risks on their firm’s footprint, reputation, and supply chain has never been more pressing,” said John Drzik, President, Global Risk and Specialties, Marsh.

Geopolitical risks, one of which – interstate conflict with regional consequences – was 2015’s most likely risk, are also present: while interstate conflict has dropped to fourth in terms of likelihood, weapons of mass destruction ranks as the second most impactful risk, one place higher than last year and its highest ranking ever in our report. 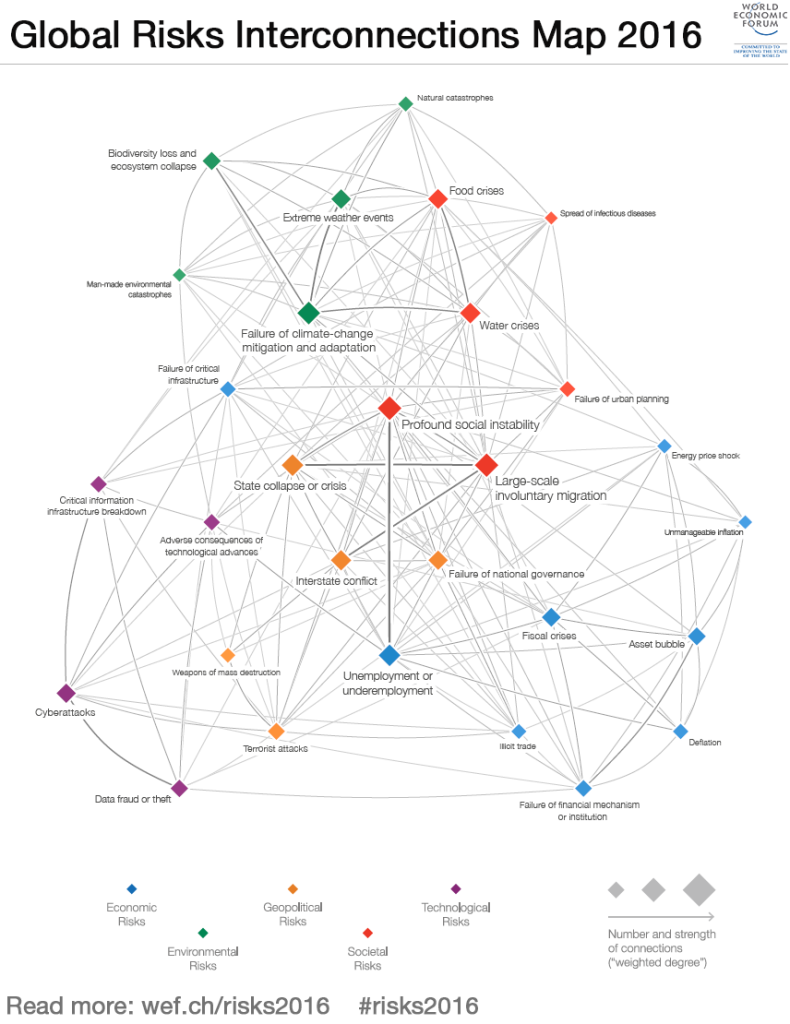 One potential black swan event could be in the area of technological risk. While cyberattacks rises slightly in terms of likelihood and impact in 2016, others, including failure of critical information infrastructure, appear to be declining as a risk in the eyes of experts. Technological crises have yet to impact economies or securities in a systemic way, but the risk still remains high, something that potentially may not have been fully priced in by experts. This would appear to be the view of a growing number of business leaders, as our separate survey of business leaders assessing risks for doing business finds cyberattacks to be the top risk in no fewer than eight countries, including the USA, Japan, Germany, Switzerland and Singapore.

International security in the spotlight

In addition to assessing the likelihood and potential impact of 29 global risks, the Global Risks Report 2016 takes an in-depth look at how the global security landscape could evolve in the future. The report features the outcomes of a year-long study to examine current trends and possible driving forces for the future of international security.

Through its analysis of the interconnections between risks, the 2016 report also explores three areas where global risks have the potential to impact society. These are the concept of the “(dis)empowered citizen”, the impact of climate change on food security, and the potential of pandemics to threaten social cohesion.

For the second year, the Global Risks Report also provides country-level data on how businesses perceive global risks in their countries. This year’s analysis uncovered patterns among both advanced and emerging economies. 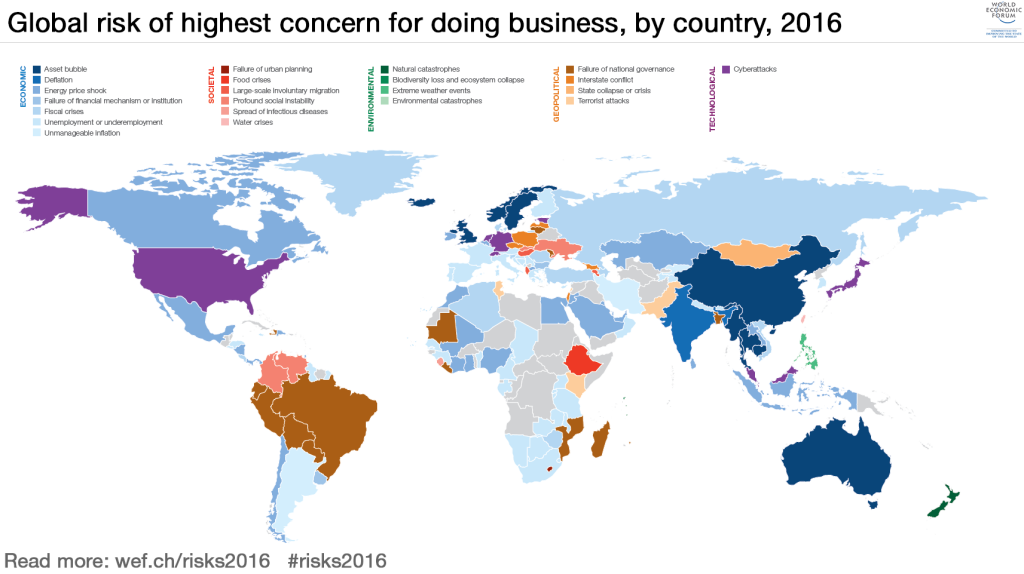 Unemployment and under-employment appears as the risk of highest concern for doing business in more than a fourth of the 140 economies covered, and is especially featured as the top risk in two regions, sub-Saharan Africa and the Middle East and North Africa. The only region where it does not feature in the top five is North America. Energy price shock is the next most widespread risk, featuring in the top five risks for doing business in 93 economies.

Cyberattacks, mentioned above, feature among the top five risks in 27 economies, indicating the extent to which businesses in many countries have been impacted already by this rising threat.

LONDON, Jan 14 (Reuters) – We live in an increasingly dangerous world, with political, economic and environmental threats piling up, according to experts polled by the World Economic Forum.

Ahead of its annual meeting in Davos next week, the group’s 2016 Global Risks report on Thursday ranked the migrant crisis as the biggest single risk in terms of likelihood, while climate change was seen as having the greatest potential impact.

Around 60 million people have been displaced by conflicts from Syria to South Sudan, pushing refugee flows to record levels that are some 50 percent higher than during World War II.

Coupled with attacks such as those on Paris last year and geopolitical fault lines stretching from the Middle East to the South China Sea, the world is today arguably less politically stable than at any time since the end of the Cold War. 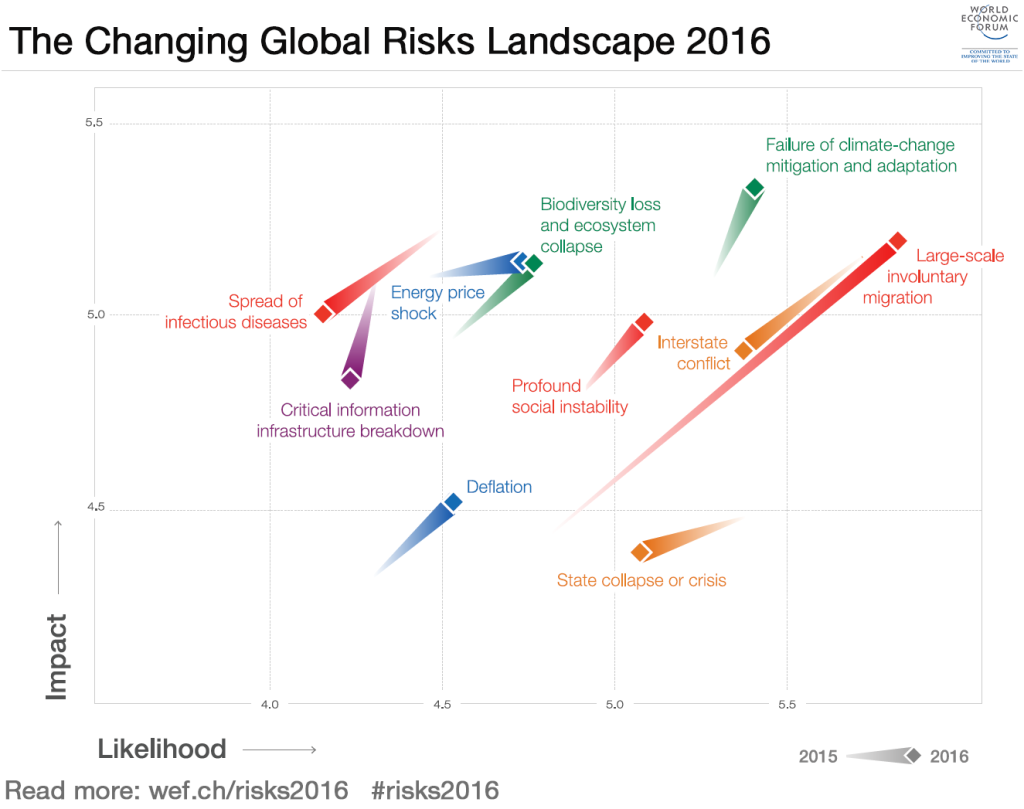 Economic fears, particularly for Chinese growth, and increasingly frequent extreme weather events are further red flags, resulting in a greater breadth of risks than at any time in the survey’s 11-year history.

“Almost every risk is now up over the last couple of years and it paints an overall environment of unrest,” said John Drzik, head of global risk at insurance broker Marsh, who helped compile the report.

“Economic risks have come back reasonably strongly, with China, energy prices and asset bubbles all seen as significant problems in many countries.”

Last year, the threat of conflict between states topped the list of risks for the first time, after previous editions mostly highlighted economic threats.

British finance minister George Osborne, one of those heading to the Alpine ski resort set the mood last week, warning that 2016 opened “with a dangerous cocktail of new threats”.

The Jan. 20-23 Davos meeting will bring together players from geopolitical hot spots such as the foreign ministers of arch-rivals Iran and Saudi Arabia, as well as the biggest ever U.S. delegation, including Vice President Joe Biden.

North Korea’s invitation, however, has been revoked, after it conducted a nuclear test, defying a United Nations ban. 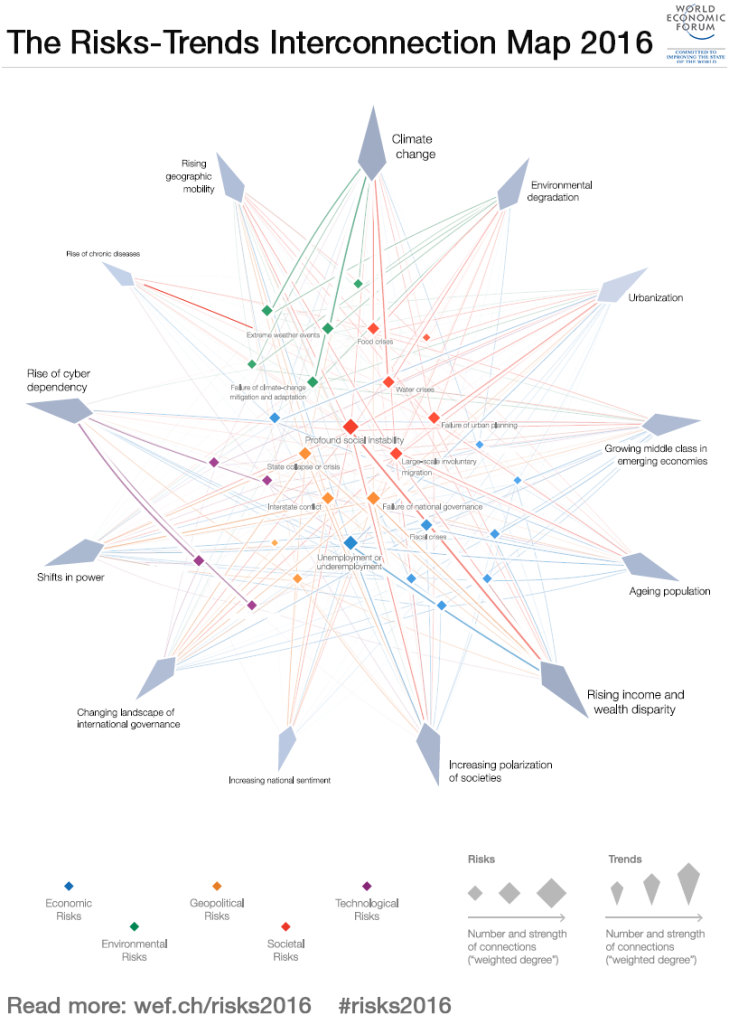 The immediate problems of Middle East tensions, China’s turbulent markets and a tumbling oil price are likely to dominate corridor conversations at Davos.

But long-term concerns identified in the report centre more on physical and societal trends, especially the impact of climate change and the danger of attendant water and food shortages.

While last month’s climate deal in Paris may act as a signal to investors to spend trillions of dollars to replace coal-fired power with solar panels and windmills, it is only a first step.

For businesses, the transition from fossil fuels remains uncertain, especially as political instability increases the risk of disrupted and cancelled projects.

One wild card is cyber attack, which business leaders in several developed countries, including the United States, Japan and Germany, rank as a major risk to operations, although it does not make the top threat list overall.

The report analysed 29 global risks for both likelihood and impact over a 10-year horizon by surveying nearly 750 experts and decision makers.