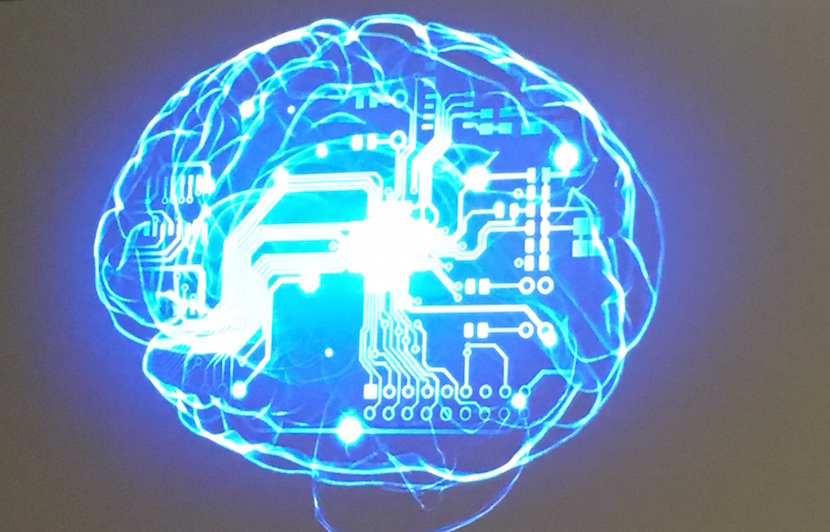 The more mankind uncovers the secrets of nature, the more we realise how parallels to the human condition exist in other life forms. Among them is the social structure of the humble ant, the subject of this interview with Deborah Gordon, Professor of Biology at Stanford University, an exclusive US ivy league college. She was invited to Davos this year to share insights gained from over a quarter century of studying ants, and, in particular, the “Anternet” which has many similarities with the Internet. The obvious learning from the interview is how ants, which are sightless and only communicate through feeling, are able to operate so efficiently without hierarchy and central control – in direct contrast to the social structure imposed on human beings. Time for mankind to make like an ant? – Alec Hogg

It’s one of the great universities in the United States. Have you been teaching there a long time?

What you’re doing in Davos is interesting because you’re relating your understanding in biology with human sciences.

Yes, I work on ants and I think about how ant colonies work together collectively, and I have interested analogies between collective systems, including ants and brains and possibly human organizations.

WATCH: Deborah Gordon’s TedTalk: What ants teach us about the brain, cancer and the Internet

Most ants can’t see and they communicate using smell, so they use very simple interactions, based on smell. They smell with their antennae and when one ant touches another with its antennae, it can tell, for example, by the smell, whether the other ant is nest mate. Each ant is using just its recent experience of these very simple interactions to decide what to do. The message is just the pattern of interaction.

There’s no central controlling system for the ants as well, which is also interesting when you bring it down to human society.

Yes, in an ant colony there is no one in charge. All the ants that you see walking around are sterile, female, workers and there one or more reproductive females, even though we call them queens, they have no power or authority. They don’t tell anybody what to do. They just lay the eggs.

How do the ants know what to do? 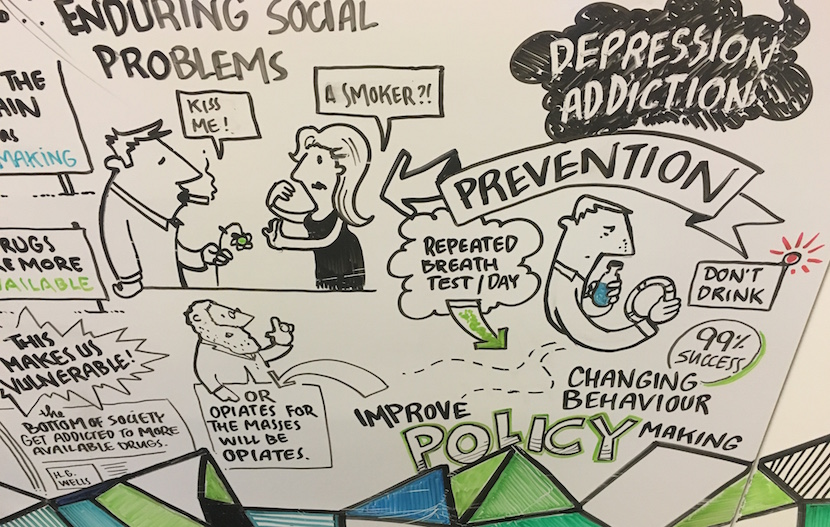 Now, you also look into the brain, into the neurosciences. What can we learn, our brains, from what you’ve just described to us about an ant colony?

Would a neuron then be almost like the way that the ants work?

Well, you can make an analogy between an ant colony and a brain and ants and neurons. We’ve also started to investigate the neurons of ants to try to understand how an ant assesses its interactions and why some colonies are different from others. It’s these differences amongst colonies that evolution is acting on and we’ve been able to see how evolution is shaping the collective behaviour of whole colonies by selecting on how each ant reacts to other ants.

You also have described something called the ‘anternet’. What is that?

That’s a name that my colleague in computer science, Balaji Prabhakar and I came up with to describe an analogy between how one kind of ant regulates its foraging activity and how data traffic is regulated in the internet. Harvester ants living in the desert have to spend water to get water. An ant loses water by being outside and they get their water from the seeds that they collect, so the colony constantly, moment-to-moment has to decide whether it’s worth it to go out and forage, given how hot it is. Is there enough food out there to make it worthwhile and the way that it works is that an ant doesn’t leave the nest to forage unless it meets enough ants coming back with food. This makes sense because the more food there is out there, the more quickly ants find it, the more quickly they come back and the more ants go out for food. It’s a kind of simple, positive feedback.

‘Anternet’ refers to the analogy with the protocol in the internet called TCPIP, which regulates data traffic and was set up in the early days of the internet when it was very important not to send data out unless there was bandwidth to carry it. The way that works is that when you press the button to send data on the computer – each packet of data doesn’t leave the source computer until there’s been an acknowledgment from the router that the last one had the bandwidth to go on. In that way, again, simple, positive feedback regulates how quickly data goes out, so as not to lose any data by sending out data when there’s no bandwidth to carry it.

Did Tim Berners-Lee know about this when he started the internet and the early pioneers, or did they just naturally do what ants do?

Yes, well the ants definitely came first, so ants have been around for at least 130 million years, but we didn’t know about what the ants were doing when the internet was developed but they were under very similar environmental constraints. Just as in the desert – the ants are constrained by the need to conserve water, so in the early days of the internet, when it was small, it was constrained by the need not to waste data bandwidth.

What happens to an ant colony in the end? How do they survive? Which ones survive and which ones don’t?

Well we found that looking at these harvester ants in the desert in a site that I’ve been tracking for a long time in Arizona, in the South-West U.S. that colonies that conserve water, and sacrifice getting food, so as to conserve water, are actually having more off-spring colonies. Natural selection is favouring restraint and the conservation of water in the species, in the current drought conditions.

Well, it’s pretty clear that in this natural system it’s better to conserve water than to get as much food as possible.

I was talking to someone from the Rockefeller Foundation this morning, and they’re trying to address the wastage in food. One-third of food that is grown goes rotten. Now, in an ant colony that just couldn’t happen, could it?

Well, ants aren’t perfect and the system is never, tuned to be exactly optimal but certainly evolution over these 130 million years has shaped ant algorithms to work very well.

What got you interested in ants in the first place?

I got interested in ants because I was interested in developmental biology, how an embryo develops. An embryo is another one of many natural systems, like the brain or an ant colony, without central control. Nobody says to a cell, ‘okay you go be liver, you go be bone’ and yet somehow, in the aggregate through very simple interactions amongst cells it develops into a differentiated embryo. I wanted to look at a system like that but I want to be able to watch it because I’m very visual and I learn from what I see. With embryos, it’s a little bit harder to watch all the cells interacting, so I got into ants for a very abstract reason but of course, like anything, once you get into it then it compels you and I started asking questions about ants because I was looking at ants and trying to figure out what they were doing.

It is interesting how nature can be applied across many different parts of life.

Yes, I think that collective behaviour of this sort, without central control, is widespread in nature and that we’re used to thinking about our own human systems as hierarchal. Maybe even our own organisations aren’t as hierarchal as we think but when we look to nature, it might seem surprising that there are so many systems that work without a leader. In fact, working without a leader is the rule in nature.

Do you think it will ever be a situation in humankind, where we can work without leaders? Where we won’t have these presidents and prime ministers that we put onto pedestals only for them to show their feet of clay?

I don’t know if we’ll have governments without leaders but we already have many systems without leaders. The internet is an example. There are many large networks that we all participate in that don’t really have a leader and that work, operate and change, and respond to changing conditions only through the ways that simple interactions add up to create an outcome.

Deborah, have you been to Davos a number of times?

No, this is my second time. This is also… Davos is a great example of a system without central control, in which all kinds of unexpected interactions lead to interesting outcomes.

Your invitation to present your theory – is that part of a particular theme on learning about the brain?

Are we getting any closer to addressing the hidden illnesses, mental illnesses, the afflictions of the brain?

The group that I’m here with is looking especially at what’s called ‘Reward Behaviour’ that’s driven by dopamine and it turns out that the kinds of responses to interactions that I’m seeing in ant colonies are also seemed to be based on dopamine, and that’s what we’re currently investigating. In humans, those are questions about addiction response to substances and situations that are actually harmful to us but that trigger a reward system, based on basic properties of how the brain works.

That’s interesting. Dopamine happens in the ant colonies, or a type of dopamine, and you can then reflect it or bring it back to the human experience.

Well, dopamine is very widespread throughout many animals and it seems that for ants, each ant’s response to interactions maybe modulated by how much dopamine is available in the brain. For humans, dopamine is involved in decisions about pleasurable or aversive experiences. I don’t think that the ants feel happy when they meet another ant but it’s the same system that is using that simple kind of neurophysiologic reward to stimulate the ant to do something. In our brains that is involved in our decisions whether, for example, to use a drug of abuse.

Is it going to help alcoholism or to combat alcoholism, drug addiction etcetera, with your findings?

I don’t think that my findings will directly help with understanding alcoholism but I think that the more that we understand about how brains respond physiologically – that may help us come up with policies and ways of rehabilitating people that are consistent with what their brain is really doing.