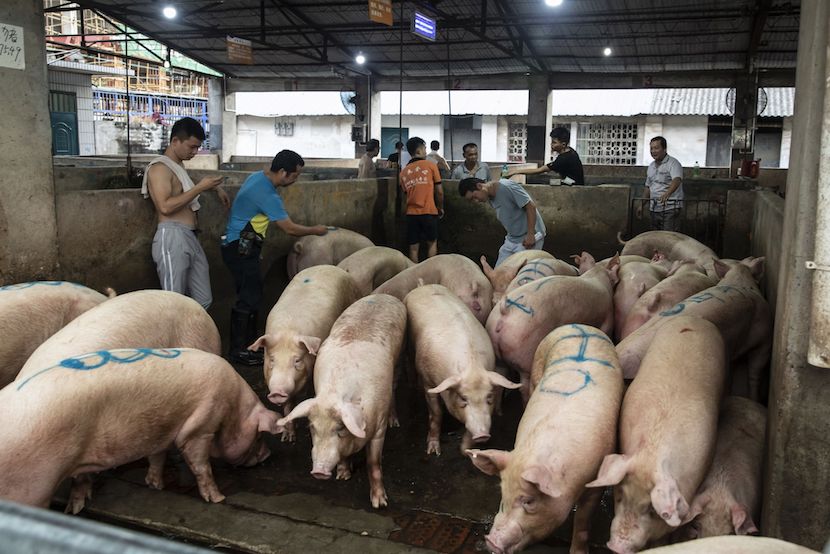 My sister-in-law calls herself an eco-warrior. What this looks like, in reality, is prodding everyone she knows to ditch single-source plastics, plastic glitter and plastic straws. This week she is calling on all her Facebook friends to stop eating burgers because, according to the science she has studied, every burger not eaten saves the world 1,300 gallons of water – the equivalent of six months of toilet flushing. A flexitarian who prefers to eat vegan most of the time, my sister-in-law tells me that cattle are bad for the earth because of carbon emissions. I have noticed that my sister-in-law is not a lone crusader. She is very much part of the crowd growing behind activists like Greta Thunberg, who is pushing to save Mother Earth. In China, they have a different approach to addressing sustainability: breed heavier animals so that the protein stretches further. – Jackie Cameron

In a farm deep in the southern region of China lives a very big pig that’s as heavy as a polar bear.

The 500 kilogram, or 1,102 pound, animal is part of a herd that’s being bred to become giant swine. At slaughter, some of the pigs can sell for more than 10,000 yuan ($1,399), over three times higher than the average monthly disposable income in Nanning, the capital of Guangxi province where Pang Cong, the farm’s owner, lives. While Pang’s pigs may be an extreme example of the lengths farmers are going to fill China’s swelling pork shortage problem, the idea that bigger is better has been spreading across the country, home to the world’s most voracious consumers of the meat.

High pork prices in the northeastern province of Jilin is prompting farmers to raise pigs to reach an average weight of 175 kilograms to 200 kilograms, higher than the normal weight of 125 kilograms. They want to raise them “as big as possible,”said Zhao Hailin, a hog farmer in the region.

The trend isn’t limited to small farms either. Major protein producers in China, including Wens Foodstuffs Group, the country’s top pig breeder, Cofco Meat Holdings and Beijing Dabeinong Technology Group say they are trying to increase the average weight of their pigs. Big farms are focusing on boosting the heft by at least 14%, said Lin Guofa, a senior analyst with consulting firm Bric Agriculture Group.The average weight of pigs at slaughter at some large-scale farms has climbed to as much as 140 kilograms, compared with about 110 kilograms normally, Lin said. That could boost profits by more than 30%, he said.The large swine are being bred during a desperate time for China. With African swine fever decimating the nation’s hog herd – in half, by some estimates – prices of pork have soared to record levels, leading the government to urge farmers to boost production to temper inflation. Wholesale pork prices in China have surged more than 70% this year, while pig inventories plunged 39% in August from a year earlier.

Chinese Vice Premier Hu Chunhua warned that the supply situation will be “extremely severe” through to the first half of 2020. China will face a pork shortage of 10 million tons this year, more than what’s available in global trade, meaning it needs to increase production domestically, he said.

During a recent visit to major livestock provinces of Shandong, Hebei and Henan, Hu urged local governments to resume pig production as soon possible, with a target of returning to normal levels next year.

Still, many farmers are wary about restocking swine after being hurt by an earlier outbreak. Also, piglet and breeding sow prices have surged, making it more expensive for backyard farms to afford rebuilding their herds. Increasing the size of pigs they already own may be the next best step.