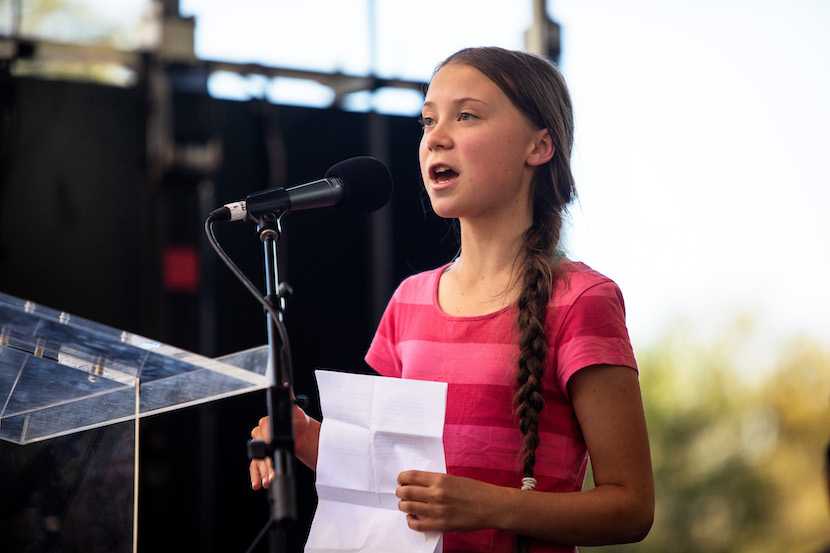 It’s an ironic truth that we talk of ‘out of the mouth of babes,’ especially with regard to Greta Thunberg, 16, and her outraged challenge of a seemingly uncaring adult world when it comes to climate change. Here Sara Gon of the IRR, paints the fuller picture in initial apparent support of Thunberg’s crusade and global activist uptake, while reminding us that our knowledge of evolution and planetary history strongly informs the odds of a non-human event proving just as catastrophic as human inaction. Greta’s admirable passion – whether driven by her diagnosis of Asperger’s Syndrome and its concomitant obsessive-compulsive disorder (OCD), or not, doesn’t embrace the full ambit of climate change catalysts. Yet, and here’s the irony; it’s perhaps the very cards that life dealt her that have put her centre stage. Call it ‘God’s got a sense of humour’, if you’re religious. Brings to mind 23-year-old blind/autistic Kodi Lee’s evocative debut and subsequent win, singing behind the piano in America’s Got Talent earlier this year. As Sara predicts, watch out for Greta’s name in the upcoming Nobel Peace Prize nominations. Story courtesy of The Daily Friend. – Chris Bateman

Greta, there’s more to it than that

When she was 11 she became depressed and lethargic, stopped talking and eating, and was eventually diagnosed with Asperger’s syndrome, obsessive-compulsive disorder (OCD), and selective mutism. She doesn’t, however, view her Asperger’s as an illness, rather calling it her “superpower”.

For about two years, Thunberg challenged her parents to lower the family’s carbon footprint by becoming vegan and giving up flying, which meant her mother had to give up her international career as an opera singer.

Thunberg credits her parents’ eventual response and lifestyle changes with giving her hope and the belief that she could make a difference.

In late 2018 Thunberg began the ‘school climate strikes’ and public speeches, which made her an internationally recognised climate activist. In one of her first speeches demanding climate action, Thunberg described the selective mutism aspect of her condition as meaning she “only speaks when necessary”.

Thunberg first got the idea of a climate strike after the school shooting at the Marjory Stoneman Douglas High School in Florida, which led to students refusing to go back to school and organising the March for Our Lives in support of gun control.

On 20 August 2018 the fifteen-year old Thunberg, who had just started grade nine, decided not to attend school until the 2018 Swedish general election after the heat waves and wildfires during Sweden’s hottest summer in 262 years. Her demands were that the Swedish government reduce carbon emissions in accordance with the Paris Agreement, and she protested by sitting outside the Riksdag every day for three weeks during school hours with the sign Skolstrejk för klimatet (school strike for the climate). She also handed out leaflets that stated: “I am doing this because you adults are shitting on my future.”

Are you prepared to bet against Thunberg being awarded the 2019 Nobel Peace Prize?

For those of us who don’t believe that teenagers know everything and that Thunberg’s encouraging school children over the world to “strike for the climate” is worthy of serious parental discipline, the following may be of interest.

In The Story of Earth & Life: A southern African perspective on a 4.6 billion-year journey by Terence McCarthy and Bruce Rubidge, compiled by the staff of the School of Geosciences, University of the Witwatersrand, and published by Struik Nature, the authors note that global warming is a source of concern ‘because of its possible effects on climate, and especially on food production and sea level.”

They point out that some have suggested that climate change may result in an ice age by upsetting global heat transfer systems. The last ice age occurred about 10 000 years ago and if it occurred now it would be catastrophic for our civilisation: it is likely to cause immense social and political upheaval as displaced nations try to find somewhere else to live.

They say that the underlying assumption concerning warming and the greenhouse gas effect is the notion that the world’s temperature and climate should stay unchanged. The geological record tells us, however, that dramatic change is shown to be inevitable. “We have been living in an abnormally warm and climactically stable period and cannot expect it to last indefinitely.”

The authors accept that we may be contaminating our atmosphere which could influence global climate. However, there are other forces which we don’t fully understand, which have caused changes in the past.

Last Friday over 4 million people striked for the climate.
This Friday we do it again!
170 countries and 6383 events so far in #weekforfuture
Find or register your strike at https://t.co/G06WbXNvl1 or local websites.
Spread the word!#FridaysForFuture #ClimateStrike pic.twitter.com/VXCnPQzw6a

Major storms can cause major disruption, with the worst case on record occurring in March 1989 when a severe magnetic storm cut electricity to 6 million people in Quebec, Canada, as a result of its effect on power lines.

There has been a steady decrease in magnetic field strength and at the current rate of decrease our magnetic field will vanish early in the next millennium. A globally weakened magnetic field will allow widespread penetration of electrons from the Solar Wind into the upper atmosphere where nitrous oxide formation may occur, resulting in extensive loss of the ozone layer. More worrying is how our electronic technology will handle the increasing weakness of the magnetic field.

Our activities have damaged the environment through the release of greenhouse gases. More damaging has been our destruction of the natural habitat due to population growth and resource consumption. As human populations have grown and industrialisation has spread, the problem has intensified resulting in the “Sixth Extinction”.

So, while the authors would agree with Thunberg’s call for sustainable living and reducing carbon emissions, they give us some insight into the complexity and multi-factorial nature of the problem.

What we can control in climate change is extremely complex and fraught; but what we can’t control may very well determine our extinction.

It is unedifying watching a bumptious teenager strutting the world stage admonishing us for “shitting” on her future. But it is downright cringe-worthy watching all those adults who should know better, taking it.