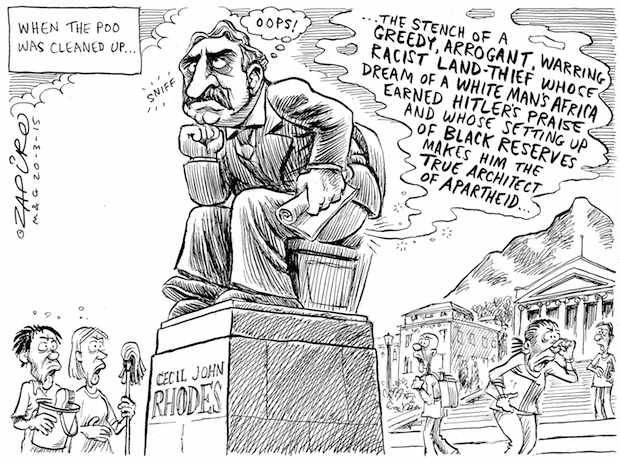 As 2015 began, Facebook founder Mark Zuckerberg committed to read two books a month and would be starting with Moises Naim’s masterpiece The End of Power. Most appropriate given the disruptive force of Zuckerberg’s creation. In his book Naim explains how power works and why it is shifting in pretty much every aspect of our lives. It is being driven by what he describes as micropowers, a mushrooming version of Malcolm Gladwell’s Davids – small, nimble activists groups who suddenly realised they are far more powerful than even they considered possible. South Africa experienced an example recently when a small group of previously powerless students overturned a century of tradition. In double quick time their unorthodox protest, witnessed by the media, forced UCT’s Council to agree to remove a statue of the university’s benefactor and one-time global colossus Cecil John Rhodes. Zapiro celebrated the students’ victory with the cartoon republished below. Moises Naim has uncovered a major structural shift that will change our lives in ways we cannot yet appreciate. – Alec Hogg