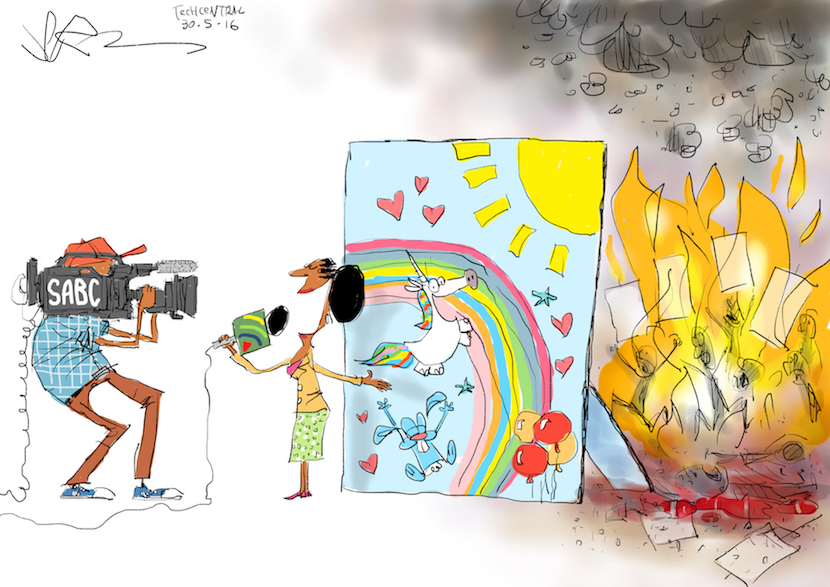 “It was never the intention of the ANC to make the national broadcaster resemble the SABC under apartheid,” the source said. “Individuals within the organisation took it upon themselves to act for the political masters.”

The anchor quote on this article came from the Zuma faction and articulated its concern about the way in which Snuki Zikalala, appointed by President Thabo Mbeki, had abused his SABC influence to deny Zuma airtime. Now, parliament is to debate the way in which Zuma, but with greater drama, excess and chaos at Auckland Park, has done exactly what his predecessor was accused of.

Ten years ago, Jane Duncan, then with the Freedom of Expression Institute and the then Chief Executive of the SABC, Ihron Rensburg, seemed to reach a consensus that the situation at the SABC had reached a point of no return.

Duncan said: “Maybe we should consider a debate that looks as to whether the SABC is a ruling party broadcaster or a public broadcaster”.

Rensburg acknowledged that the method used to appoint the SABC board needed re-evaluating.

The recent decision by the parliamentary portfolio committee on communication to initiate an inquiry into the continuing crisis at the SABC is thus welcome and seemingly the product of wide consensus in this regard.

I thought I had seen it all in May 2008 when the battle between the Mbeki faction and the Zuma faction in the SABC board exploded into a ferocious and ferociously expensive handbags-at-dawn legal circus, but the recent report that the SABC is offering free funeral cover to people who renew their TV licences leaves me perplexed.

Back then, Hlaudi Motsoeneng had given then Free State premier, the late Ivy Matsepe-Casaburri, 24/7 coverage when he called the shots at the Lesedi FM radio station in Bloemfontein and she wanted him reinstated after he had been justifiably dismissed. Her order in this regard was conveyed to Dali Mpofu, the Chief Executive, who duly ordered the head of news, Snuki Zikalala to comply. Zikalala, aware of the havoc which Motsoeneng had unleashed at the Bloemfontein news office of the SABC, demurred. Mpofu, however, had apparently realised that the balance of power had moved away from the man who had appointed him, President Thabo Mbeki and towards the Zuma faction, so he suspended Zikalala. The board, which contained Mbeki appointees such as Christine Qunta, then suspended Mpofu.

After substantial expenditure in court costs, Mpofu left. To persuade him to leave he was paid what at that time was a record SABC golden handshake of close on R14 million. This figure included a restraint of trade pay-out of close to R4 million which the SABC could not afford so the Department of Communication contributed the required amount. On Mpofu’s watch the SABC was bankrupted and had its news credibility destroyed and for this, courtesy of the ANC’s deployed cadres, he was duly rewarded and became an instant multi-millionaire.

At the time, on 4 March 2008, a former Labour Court judge, Puke Maserumule, warned the SABC that the reinstatement of Motsoeneng could cause problems:

“In the absence of objectively justifiable reasons for his (Motsoeneng’s) re-instatement, it will become almost impossible for consultant (SABC) to discipline or dismiss other employees who commit similar offenses to those committed by Motsoeneng, Their morale will in all probability be negatively affected by his re-instatement, and this may be worse if he returns to Bloemfontein and more so if those who testified against him are required to report to him.”

Maserumule’s warning was not heeded with the catastrophic consequences that we live with today.

But, just when you think you have heard it all, Thinus Ferreira, a specialist reporter on television matters, reveals that if you pay your TV licence you now get free funeral cover!

Where is the money going to come from and what does AVBOB have to say about this?

CANT MAKE THIS UP. #SABC says it now offers Free Funeral cover to people who pay their #SABC TV licence as a reward.

Stephan Hofstatter one of the country’s leading investigative reporters avers that the SABC is effectively bankrupt and will shortly be needing another billion rand bailout.

But wait, there’s more, much more – in the rotund and intrusive presence of a R2 billion elephant in the room that will assuredly not succumb to small bites!

As I pointed out in my Media Online article, “The SABC and preventative maintenance’, the concept of fixing things before they break seems to be alien to the ANC’s deployed cadres.

Effectively, from the start of the Mbeki era – when Mbeki loyalists like Eddie Funde, Christine Qunta, Thami Mazwai, Snuki Zikalala and Dali Mpofu took control – there has allegedly been no investment in the maintenance and improvement of existing SABC infrastructure in any of the nine provinces.

There were far more important things to spend money on such as R3.3 million for soccer world cup tickets and a quarter of a million rand on an overseas trip for a crony where prostitutes were allegedly patronised but not paid.

Hlaudi Motsoeneng acknowledged the maintenance problem at a recent news conference when he said that in some regional offices the ceilings are collapsing.

In 2014 Motsoeneng asked the then head group head of technology Sipho Masinga to report back to him on the state of all the buildings occupied by SABC personnel after the corporation’s television channels went off air without warning, not once but twice

In his report Masinga said that “… several of the SABC’s buildings in the nine provinces are unsafe and falling apart”, and that “… most broadcast studios are totally outdated and shouldn’t actually be used for broadcasting anymore”.

In effect he blamed this on cadre deployment saying that many of the problems with failing infrastructure were “aggravated by the appointment of incompetent persons who place moratoriums on maintenance and investments in new technology”.

This did not please Motsoeneng and Masinga was subsequently suspended and then dismissed – which did not solve the problem of collapsing ceilings or problematic lifts.

According to Masinga it would cost some R2 billion to restore the SABC buildings to a state where they vaguely comply with the Occupational Safety and Health Act but, not to worry, we have been repeatedly assured that Motsoeneng, who earns almost R4 million a year, is without peer when it comes to fund raising.

On 13 July it was reported that suspended chief executive officer Frans Matlala was getting what seems to be perceived as an R18 million SABC bribe to keep quiet about what he found during his SARS-instigated investigation into an allegedly dodgy studio tender.

A month later the Sunday Times reported that the acting SABC CEO James Aguma had awarded a Gupta-linked businessman, Kuben Moodly a “suspect” R380 million debt-collecting contract without going out to tender.

Two days after that article was published the parliamentary portfolio committee of communication agreed with the Democratic Alliance that a full-scale parliamentary inquiry into the institutional rot at the SABC was necessary and urgent.

Indeed so, but we are comforted by the thought that the SABC possesses the intellectual firepower to buttress and support the Solomonic wisdom of Motsoeneng’s business decisions. As a Pricewaterhouse Cooper skills audit showed:

Furthermore, only 45% of respondents showed a “well-developed sense of reliability and dependability in the work environment”.

The report was neatly summed up by the Mail & Guardian:

The findings revealed that the most scarce and critical skills at the SABC were communication skills, time management, strategic thinking, broadcast engineering, budgeting skills, creative writing and scripting skills, and business management.

Furthermore, on the SABC board we find Nomvuyo Mhlakaza who was appointed with no previous experience in broadcasting after she married Buti Manamela, National Secretary of the Young Communist League and ANC MP. She was, however, a member of the ANC Youth League which reportedly spent R100 million on the World Festival of Youth and Students an event which tilted the earth on its axis and provided the inspiration and impetus for the Arab Spring – which, they tell us, would not otherwise have happened.

Nothing to worry about, then.

While it is to be welcomed, I would be very surprised if the parliamentary inquiry achieves anything significant or of consequence because, after all, there was never any reason for concern in the first place and the SABC is in good hands – ask Faith Muthambi, she’ll tell you!

What is significant is that prior to 1994 the current chaos, continuing court cases, daily adverse headlines, infrastructural decay, pervasive snouting and concomitant financial crises, and the wholesale purging of honest, committed news broadcasters did not occur. I know that because I was there for a decade before and after that date. The sabotage of good governance at the SABC which started under President Thabo Mbeki has re-occurred, albeit in exaggerated form, under President Jacob Zuma.

This is in no way remarkable because what is happening at the SABC simply mirrors what the ANC is doing to the rest of South African society and the recent countrywide pickets outside SABC buildings – replicated in daily service delivery protests elsewhere – testify to that. The people have spoken however and, hopefully, parliament’s portfolio committee on communication will take cognisance of what happened in the recent local government election.