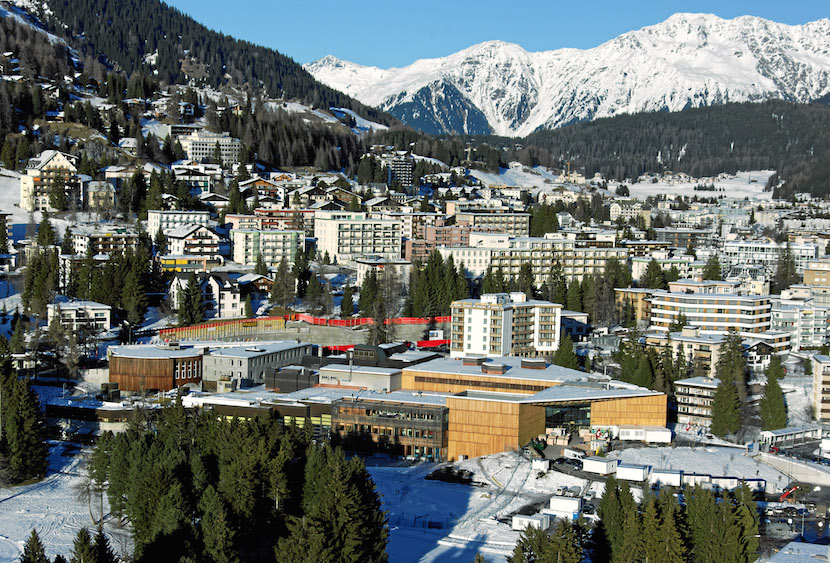 The annual Swiss Alps adventure kicks off next week, where the 2016 meeting of the World Economic Forum promises to be more absorbing than ever. This year’s theme “Mastering the Fourth Industrial Revolution”, sparked by a breakthrough book, The Second Machine Age, by Erik Brynjolfsson and Andrew McAfee. The Bloomberg article below looks at the problems of today – including China’s stock market meltdown, emerging cold war between Iran and Saudi Arabia, and Russia’s economic slump – are likely to be a more popular topic of discussion. A classic case of discussing the now against the future, what’s more important is anyone’s guess. Alec Hogg is attending Davos, interviewing key players, all of which will be published right here on Biznews, stay tuned. – Stuart Lowman

(Bloomberg) — The organizers of the World Economic Forum in Davos, Switzerland want attendees to focus on the challenges of the future: The theme of this year’s annual meeting is Mastering the Fourth Industrial Revolution, a catchall rubric that describes advances in technologies such as artificial intelligence and robotics. The problems of the here and now, though, are likely to be a more popular topic of discussion.

Among the assembled politicians, chief executive officers, and financiers will be many key players in simmering global crises, including China’s stock market meltdown, the emerging cold war between Iran and Saudi Arabia, and Russia’s economic slump. They’ll be meeting a couple of weeks after billionaire George Soros, a Davos stalwart, warned that the China-induced turmoil in financial markets is starting to remind him of “the crisis we had in 2008.”

Others are also voicing concerns. “This is a very stressful time,” says John Veihmeyer, the global chairman of consulting firm KPMG International, who’s heading to Davos. “Geopolitical risks are becoming much more relevant, and concern about them is accelerating.”

Undoubtedly one of the most in-demand guests at this year’s forum, which runs from Jan. 20-23, will be Fang Xinghai, the vice chairman of the China Securities Regulatory Commission, who has the unenviable task of supervising the gyrating stock markets of the world’s second-largest economy. He’s appearing on the second day of the conference, at a panel discussion on how China’s economy can “shift gears without stalling” that also features Ray Dalio, the founder of the hedge fund Bridgewater Associates, and Christine Lagarde, the managing director of the International Monetary Fund.

Read also: What makes the WEF in Davos such a success, pulling in the who’s-who of the globe?

Russia, another country looking to keep the confidence of international investors, is also well-­represented. It has dispatched central bank governor Elvira Nabiullina, who is joined by executives from state-controlled lenders Sberbank PJSC, VTB Bank PJSC, and Vnesheconombank — all still under U.S. and European sanctions. Nabiullina is participating in a Jan. 23 session on “The Global Debt Dilemma,” a suitable topic for a country trying to contain a budget deficit that’s ballooned with the collapse in oil prices.

Davos attendees hoping for insight into the spiraling conflicts in the Middle East are unlikely to be disappointed. Iranian Foreign Minister Mohammad Javad Zarif, who led his country’s talks with world powers to win a nuclear deal, will be wandering the halls of the Congress Centre. It may be hard for him to avoid bumping into officials from arch rival Saudi Arabia, including his counterpart Adel Al-Jubeir. Prince Turki Al Faisal, Saudi’s former intelligence chief and onetime ambassador to Washington, will headline a panel on understanding Islam.

Read also: A veteran’s guide on how to survive (and thrive) during Davos week

Eager not to miss a chance to buttonhole so many key negotiating partners in its last year in office, the Obama administration is dispatching its most high-ranking delegation to Davos. Vice President Joe Biden is slated to be accompanied by John Kerry, Jacob Lew, and Ashton Carter—the secretaries of state, the Treasury, and defense, respectively. Both Biden and Kerry will give solo speeches, an honor typically reserved for top heavyweights.

Traditionally, Davos has been embraced as a platform for rebranding by companies and governments looking to burnish their reputations, and this year is no exception. Argentina’s new president, Mauricio Macri, is headed to the conference along with his finance and foreign affairs ministers, looking to convince investors that his country, which has defaulted on its debts at least seven times, has turned an economic corner.

Further star power will be supplied by Justin Trudeau, Canada’s new prime minister and a reliable selfie magnet. He’s leading a much larger than normal delegation of ministers, mayors, and executives from the major U.S. trading partner, and he’s also joining a panel on gender parity in the economy, along with Melinda Gates, the co-founder of the Bill and Melinda Gates Foundation, and Facebook’s Sheryl Sandberg, both Davos regulars.