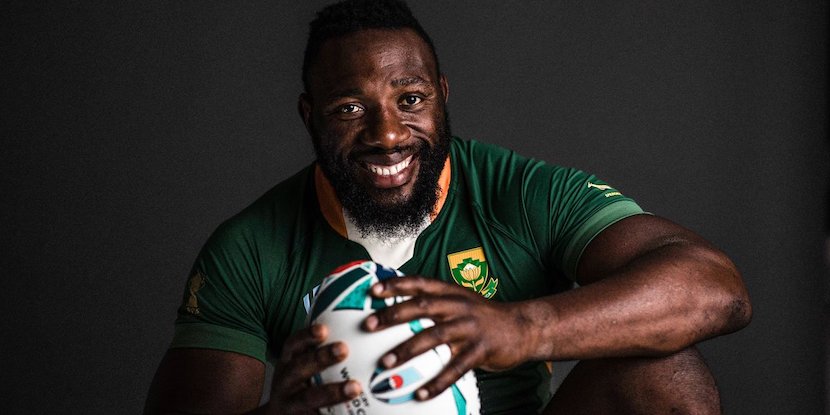 Affectionately known as Beast, Tendai Mtawarira uses his inherent characteristics of ambition and motivation to reinvent himself from sports icon to astute businessman. “The sports career is short-lived and sports people must plan for their career change as early as possible.” Tendai himself has returned to full-time studies to be better equipped for the boardroom. His insight and advice are applicable not only to sports people, but to anyone who wants to re-focus their career. – Vanessa Marks

Covid-19 has brought about many changes in our working lives. Some of us have had to adapt to working from home and using technology we wouldn’t normally use. But some people have to reinvent themselves and that’s a difficult thing to do. Who better to give advice than a sports icon who has become a full time student. Tendai Mtawarira, more affectionately known as Beast, has made some big changes in his life. Tendai, you retired at an absolute high in your career. What made you resign at a time like that and to make these big changes?

For me it was basically what I wanted to do and I wanted to exit on the highest of highs. It was always something that I’ve thought about along my career and worked so hard for. So when we won the William Webb Ellis Cup in Japan I knew exactly that this is the way I wanted to leave the Springboks. It was a dream come true for me.

You were on your way to the USA to play and coach for a major league rugby team, but that changed. What happened?

I left to go play for a team in Washington DC in February. I was settling in really well. It was a new challenge that I was really enjoying and obviously coronavirus came and pretty much stopped all the sporting around the world. So we had to cancel our season and I had to pack my bags and come back home.

Now you’re back in South Africa in lockdown, but you are using your time wisely. You are now a full time student at Henley Business School doing a PGDip. How did that come about?

It was something that I always thought about while I was playing rugby, that eventually I want to get back to studying. I did study initially prior to my rugby career taking off. I did a BComm in marketing, I didn’t complete it so it was at the back of my mind that when I stopped playing rugby I wanted to get back to my academics and get all the qualifications that I need to be successful in the business world.

How are you coping to do this online?

It’s pretty challenging. I think I got a shock to my system this week when we did our first week of lectures. I’m basically just working on my concentration and my study skills. A lot of good people at the business school are helping us. They make everything easy and everything is available for us on the school portal. So you can just get there and get all the information, all your assignments and then obviously the lectures on Zoom. So we pretty much get everything that we would have in a classroom. It does help but it’s quite a mighty big challenge ahead of me.

Tendai Mtawarira went back to school this week – as the inaugural recipient of a special scholarship from Henley Business School Africa on a programme designed to help sports icons successfully transition from the change room to the boardroom. Read here: https://t.co/KHebV013pp

Do you think that the skills that you learnt on the playing field will stand you in good stead for the MBA?

Yes definitely. On the sporting field you learn a lot of really good skills. Probably the biggest lesson you learn is teamwork. It is definitely what you need in the business world too. All those skills that I acquired on the field, I try to transfer them onto the business scene. So I’m studying for a postgraduate diploma that is going to run into an MBA, and is going to help me acquire those skills and better them, and apply them to my business ventures.

Are you still training your body, or only the mind?

I’m still training. I definitely don’t want to stop training. I want to make sure that I keep in good shape. I’ve got a few things to do around the house. I’ve got a couple of weights. I just try to gym and stay in shape.

So you’re not letting Covid-19 get you down?

Now, I am adapting to what I have around the house to work on my fitness.

Adaption is very important. So you also are a shareholder and on the board of a security company. How was the adaption for you from being on the playing field to going into the boardroom?

I’ve been involved with the Fidelity Security Group for about nine years now. I was very privileged to meet Wahl Bartmann when I was playing rugby. He took me under his wing. At first I was a brand ambassador, then they offered me shares in the business. I started learning how the security business operates and then I became a director of the business, so it has been quite and adjustment replacing my rugby kit for a tie, but Wahl is a great mentor and has really helped me to develop the skills I need, and I’m still learning and getting better all the time.

So you’ve really made quite a change in your life. A lot of sports people believe that sport is all they know and that they can’t make the transition from the playing field into a business world. What sort of advice can you give to sports people to change that belief system?

Well I think my advice to all sportsmen and sportswomen is you need to prepare for life after sport because you’ve got a certain time that’s going to run out eventually, you can’t play rugby forever, as in my case. If you’ve got business ventures that you want to get into, then do it early and make the sacrifice because as sports people we do have a lot of time. Sometimes we moan and say we just have to train and play and get on with our jobs and we don’t get much time but we actually do have time and we need to use it wisely. So I encourage all the sports people to go and do a course, it doesn’t have to be a degree, just go do something that is going to prepare you for life after sport because you’ve got a time clock and it’s going run out eventually.

When you walked out onto the stadium, you had a lot of adoring fans cheering you on and after that you get swamped by people asking you for autographs and so on. A lot of that will go now, especially going into the stadium. How do you cope with not having that exhilaration?

I’ve had an amazing journey on the rugby field. I’ve met some amazing friends and loyal fans that have just followed me through my journey and saying my name every time I played. My goal was never to have my identity in that. So I’ve always had a life outside of the game, so my adjustment I think is going to be pretty easy. So people on the streets that will remember me as Beast and I still have those memories to carry forward. It doesn’t bother me that I’m not going to have people you know speaking my name.

Well those are wise words – to having another identity. After lockdown what are your future plans?

Carry on studying. I’ll be travelling back and forth to Johannesburg, hopefully getting to class at Henley Business School and getting fully involved in Fidelity Security and just up-skilling myself and getting used to the corporate world.

If a major league team in the USA asked you to come back, will that still be something you’d be keen to do?

I have been thinking about it but that decision will only be made later on. I guess I would have loved to play a full season this year and maybe stop for good. But for now the situation has changed.

Lastly what three words would you have to describe the nature of the Beast.

I think I would describe myself in three words, the first one is ambitious, the second is motivated and then a family man.