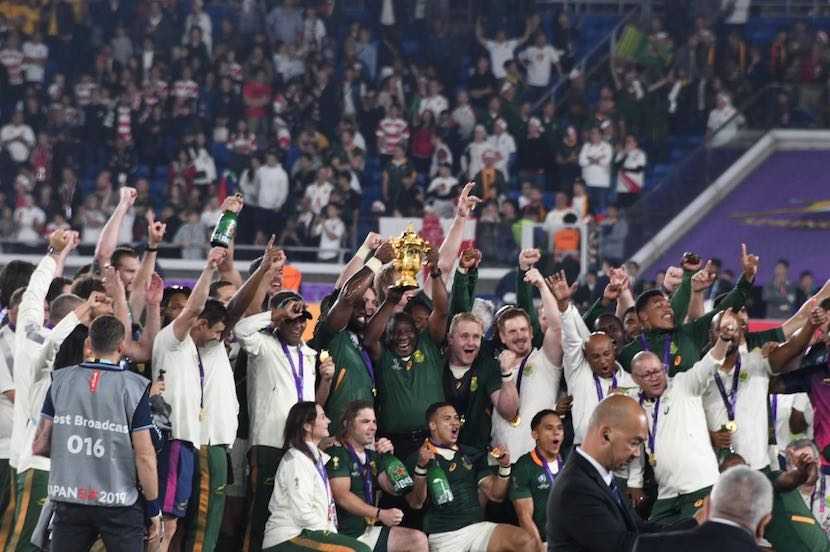 The accolades keep pouring in for the South African rugby team after their incredible 32-12 victory over England in Saturday’s Rugby World Cup final. To end off an incredible year during which the Springboks only lost once (the opening game of the World Cup against New Zealand), the team scooped three awards at the World Rugby Awards in Tokyo last night. The Springboks were named Team of the Year, Rassie Erasmus was named Coach of the Year and Pieter-Steph du Toit was named World Player of the Year. Pretty much everything was near-perfect in the final at Yokohama International Stadium, where every one of the South Africans outclassed his opposite number in the England team. Never before has a team which lost one of its group stage matches gone on to win the Rugby World Cup. And it wasn’t only on the field of play where the team got it right. In the post-match interviews and news conference, the message was also near-perfect. We heard the understated, quiet, dignified eloquence of the captain and the introspective, thoughtful comments of the coach. The members of this extended team know how much victory meant to a beleaguered nation clamouring for just one sweet story of celebration. They won’t unravel deeply entrenched racial differences and intolerance, but they gave the country a glimpse of what is possible when those differences are put aside and people from across the racial and economic divide come together for a common purpose. Erasmus was particularly eloquent when he spoke about hope and how this team had the privilege of giving hope. – David O’Sullivan

The mastermind behind the Springboks’ inspirational Rugby World Cup campaign, said it had been a privilege for the team to attempt to give South Africa a moment of hope.

Rassie Erasmus, South Africa’s director of rugby, said after the team’s ultimately crushing, 32-12 victory over England in Japan that the team had been inspired by the opportunity to bring some light and joy into the daily lives of their fellow countrymen

He said it had been the mental shift the team needed after the disappointment of defeat in the opening match against New Zealand – a performance the Springboks turned on its head by becoming the first team to win the title after losing a pool match.

“The first All Black game was a great test run for us in terms of handling pressure,” said Erasmus.

“We were terrible in that week in terms of talking about things and getting tense – it was a terrible build up that told us a lot about how to play the play offs.

“We were quite honest with one another about that. We started to talk a lot about what is pressure.

“In South Africa, pressure is not having a job or if one of your close relatives is murdered. In South Africa there are a lot of problems, which is pressure. We started talking about things like that.

An eloquent response from @Springboks head coach Rassie Erasmus on the meaning of pressure for South Africans outside of rugby #RWC2019 pic.twitter.com/pvzLjrK9gZ

But Erasmus said that hope was not about words – it was about deeds.

“It’s not talking about hope, and saying you’ve got hope and sending a beautiful Tweet about hope,” he said.

“Hope is when you play well on Saturday and people watch the game and have a nice braaivleis and feel good afterwards.

“No matter if you’ve got political differences or religious differences or whatever; for those 80 minutes you agree with a lot of things you might disagree on.

“We just believed that this was not a burden, it’s our privilege and the moment you see it in that way it becomes a helluva privilege to try and fix those things.https://twitter.com/rugbyworldcup/status/1190642244644155398

“The moment you see it in that way it becomes a helluva privilege. We started working towards that; and that’s how we saw this whole World Cup campaign.”

What Rassie Erasmus has done with this team in less than 2 years is nothing short of remarkable. The unsung hero of this #RWC19 campaign, a wonderful example of the results which are possible with competent leadership.

Springbok captain Siya Kolisi said it was hard to describe his emotions when he lifted the trophy: “I honestly can’t explain how I was feeling at that time,” he said.

“But to see the joy in my team mates faces that was the best thing for me because I know how hard they have worked and how hard the coaches have worked.

“The way we played was because we wanted to say thank you to our coach who came in and changed a lot – on the way that we saw rugby – and I’m really grateful that we could do this for him and the coaching staff and everyone in the management.”

Kolisi also said that the team had been inspired by the support from South Africa.

“I have never seen such support from our people back at home and I honestly don’t think we could have done it without them,” he said.

“The videos they sent of people coming together, it was really beautiful for us to see. I really don’t think I can say any more.”

Kolisi said the key change for the team on their journey to the title was the first meeting at the start of the 2018 season.

“He said we were getting quite a lot of money and doing lots of things off the field, but we didn’t make rugby the main thing.

“He told us straight; it has to change, the shift has to come, rugby is more important; the Springboks are more important than our personal goals and as soon as the team does well good things will come.

“There are so many people who spend their last salary to come and see us play. They want to see us give our best on and off the field. Understanding that was the change of mindset and we started working hard; a lot of us got off social media to make sure we put our hearts and souls into it on and we challenged each other.”

People talk about Warren Gatland and Eddie Jones as great coaches but what Rassie Erasmus has done with South Africa is simply phenomenal.
A joke team 2yrs ago, he's won the Rugby Championship and the #RWC2019
Brilliant planning and execution.

A stellar year for the Springboks was triumphantly crowned on Sunday evening when the team collected the three top awards in the World Rugby Awards at a glittering event in Tokyo.

The awards were rich reward for a year in which the Springboks completed the unprecedented double of winning both the Rugby World Cup and the Castle Lager Rugby Championship in the same season.

The team finished the year at No 1 in the world rankings, for the first time since 2009.

The Springboks won 10 out of 12 tests, scoring 424 points and 52 tries and conceding only 138 points and 10 tries – only four of them in seven matches at the Rugby World Cup.

Statistically, it was the most successful Springbok season since 1998 when the team was in the middle of a 17-match winning streak.

It was the first time South Africa had won any of the top three awards since 2009.

The Springboks were chosen in preference to fellow Rugby World Cup semi-finalists England, Wales and New Zealand and Japan.

South Africa were also nominated in two other categories.

Herschel Jantjies was listed with England wing Joe Cokanasiga and France flyhalf Romain Ntamack in the category of Breakthrough Player of the Year, for players who have appeared in less than a full international season. The award was won by the 20-year-old Ntamack who has established himself as his nation’s preferred flyhalf.

Cobus Reinach’s hat-trick try in the 66-7 demolition of Canada was nominated as one of the four tries of the year. TJ Perenara of New Zealand took the award for a length-of-the-field score involving several players against Namibia.