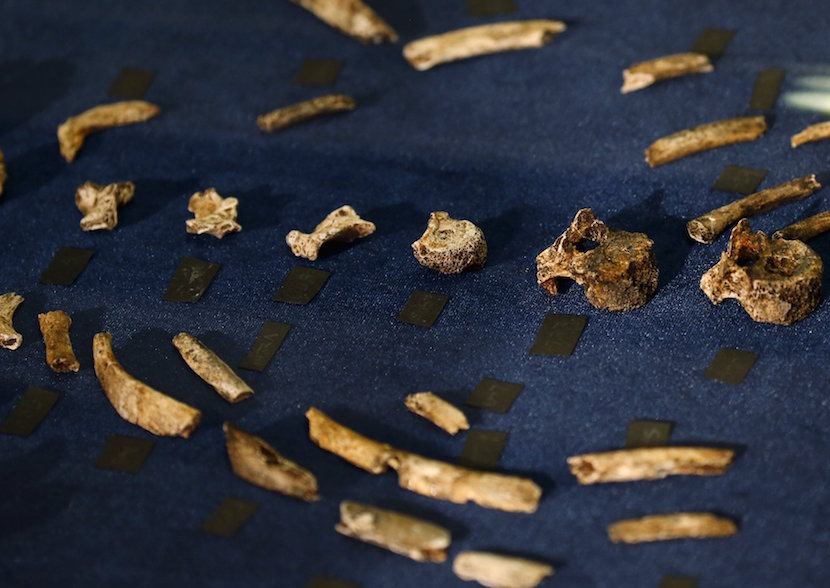 The moment Homo Naledi was made public has been epitomised by Deputy President Cyril Rampaphosa kissing a skull replica. It’s an event that’s raised the political profile of South Africa, and given the country yet another opportunity to leave a mark on the rest of the world. It’s also distracted the public from what some see as an oncoming recession. As a South African one hopes it will be remembered for what it was, Africa’s largest collection of human-related fossils and not degenerate into a scandal of bribery and corruption like the 2010 Soccer World Cup has. The Reuters piece below looks at the scientific significance of the find, with some questioning whether or not Homo Naledi is a new species, or was it just called so in haste. – Stuart Lowman

JOHANNESBURG, Sept 16 (Reuters) – A dramatic fossil find has given South Africa reason to celebrate amid economic gloom, but some experts question its scientific significance.

By contrast, the political significance is not in doubt.

“We are delighted that discoveries that we would never have imagined have been found here,” said South African Deputy President Cyril Ramaphosa, who shared the stage with scientists last week during the televised announcement of “Homo naledi.”

The discovery, in a cave 50 kms (30 miles) northwest of Johannesburg, is Africa’s largest collection of hominin (human and human-related) fossils – 15 individuals pieced together from over 1,500 fragments.

Recognition of #HomoNaledi and #BenedictDaswa shows that in SA all things are possible. And we can celebrate both science and religion

Homo naledi, which has not been dated, has also stirred excitement because researchers say the hominids seemed to bury theirs dead – a trait previously thought to be uniquely human.

This has lifted sagging spirits in South Africa, whose economy shrank in the second quarter amid power outages and falling commodity prices. 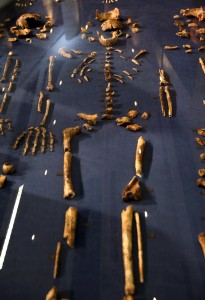 “For a while at least, South Africa was the place where leading scientific research happens – not the vulnerable, emerging market economy,” the Business Day newspaper said in an editorial on Monday.

Some scientists say the conclusions are hasty.

“In science there is always a gap between the data you have and the interpretations you draw. And in the case of proclaiming a new species the gap is really large,” said Christoph Zollikofer of the University of Zurich.

Others say the fossils belong to an already-named species.

The University of California’s Tim White said from what he had seen, the fossils belonged to Homo erectus, a species discovered in the late 19th century.

“New species should not be created willy-nilly. In order to claim a new species one has to demonstrate that it’s different from anything that’s ever been known,” he said.

White noted the published findings included a table comparing 83 anatomical features of naledi with other species.

“When you look across those characters where it’s claimed to differ from Homo erectus, you find that the portrayal of Homo erectus is often inaccurate. And only 13 of the 83 characters are even alleged to be different,” he said.

Questions have also been raised about the failure to date the find and the theory that the species might have disposed of its dead, which has been proposed as the most plausible scenario for the bones’ placing in the cave but is ultimately a guess.

Naledi’s lead scientist, Lee Berger of Johannesburg’s University of the Witwatersrand, countered that his critics were the ones showing haste.

He said they should not “shoot from the hip based on their pre-conceived ideas but look at these papers and give a thoughtful critique in the peer-reviewed literature.”

“We were able to mass the intellectual power and energy of more than 60 scientists … That logically speeds things up.” 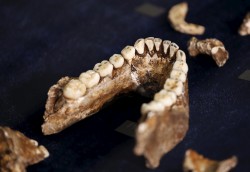 A dozen papers on the finds were submitted to the highly regarded journal “Nature” but were not published there.

“Nature publishes short articles on major discoveries,” Berger said. “We attempted to put the 12 in and this was simply too much.”

Berger, a jocular American with a flare for showmanship, has seen this kind of academic infighting before. In 1995, he and a colleague proposed the ‘Taung child’, a famed hominin fossil unearthed in 1924, had been killed by an eagle – a controversial claim at the time.

A decade later, a study on primate predation by crowned eagles provided Berger with his smoking gun – the puncture marks in the eye sockets of the modern monkeys matched those in the Taung child’s.