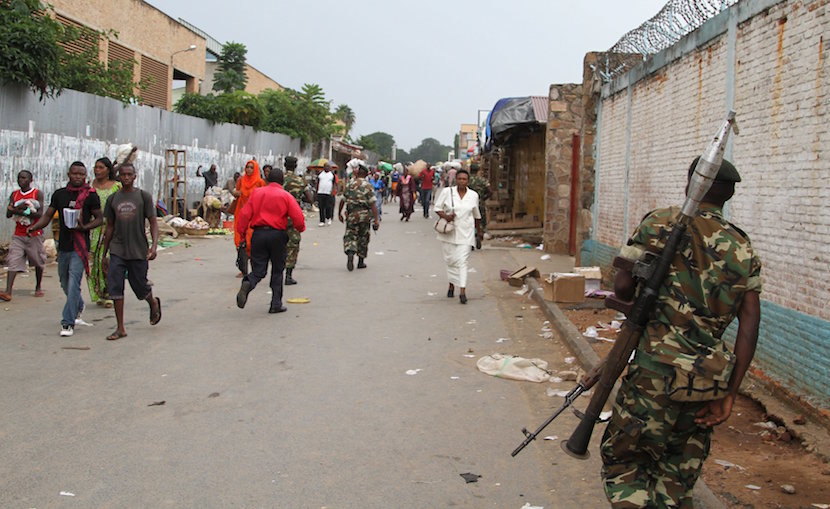 Whatever slight chance remained that Nkosazana Dlamini-Zuma could convince the global community she is a worthy SA Presidential successor to her flawed former husband, has now gone. The organisation she runs, the African Union, last night buckled to the bullies in Burundi. The country has been wracked with violence after revolts erupted when President Pierre Nkurunziza refused to step down after his second term, which the Constitution requires him to do. Citizens of Burundi have taken to the streets to demand his departure, meeting a brutal response from Nkurunziza’s loyalists. UN Secretary General Ban Ki-moon recommended external troops be sent into Burundi to quell the violence. But the AU, for all its prognostications about apparent support of democracy, clearly prefers the Pontius Pilate option, last night washing its hands of any concrete involvement. Authentic leadership comes through taking the tough decisions to support the weak against powers oppressing them. The Al-Bashir/Mugabe-supporting AU has once again shown its true colours. – Alec Hogg

The African Union has decided against sending peacekeepers to crisis-hit Burundi after the embattled government said that any such move would be considered an invasion.

Smail Chergui, AU commissioner for peace and security, told a press conference in the Ethiopian capital on Sunday that a proposed deployment of 5,000 troops would be deferred until permission was granted by Bujumbura.

The decision came after a closed-door session at the AU where African leaders are meeting for a two-day summit.

Al Jazeera’s Catherine Soi, reporting from the African Union headquarters in Addis Ababa, said the decision was not a surprise considering Burundi’s opposition to the plan.

“It is going to be interesting to see how this delegation will be able to convince them to accept the troops,” she said.

Chergui said that an AU delegation would now fly to Burundi to hold talks aimed at ending the violence.

Speaking to Al Jazeera, Stephanie Wolters, from the Institute for Security Studies (ISS), said the decision could galvanise the armed opposition and lead to an escalation of violence in the country.   “It would appear that [Burundian] government propaganda about the situation in the country, had won over certain countries, and this may have led to this decision.

“Also i think there is no indication that the Burundian government will give its consent to the deployment of troops any time soon,” Wolters, who heads the conflict prevention and risk analysis program at the South African based think-tank said.

The AU charter’s Article 4 (h) gives it the right to intervene in a fellow nation state “in respect of grave circumstances, namely: war crimes, genocide and crimes against humanity.”

Analysts say other African nations are wary of setting a precedent of deploying troops against the government’s wishes.

Solomon Dersso, a political analyst, told Al Jazeera that while Burundi has demonstrated some flexibility on the issue of dialogue, there has been “complete disagreement between Bujumbura and the AU when it has come to the deployment of [AU] troops”.

On Saturday as the AU summit opened, UN Secretary-General Ban Ki-moon, made clear that troops were needed to stem the violence.The UN has warned that Burundi risks a repeat of a 1993-2006 civil war, with hundreds killed since April 2015 when President Pierre Nkurunziza announced that he would stand for a controversial third term in office.

At least 230,000 people have fled to neighbouring countries.

Since Nkurunziza’s  re-election in July, clashes between government loyalists and the opposition have turned increasingly violent.