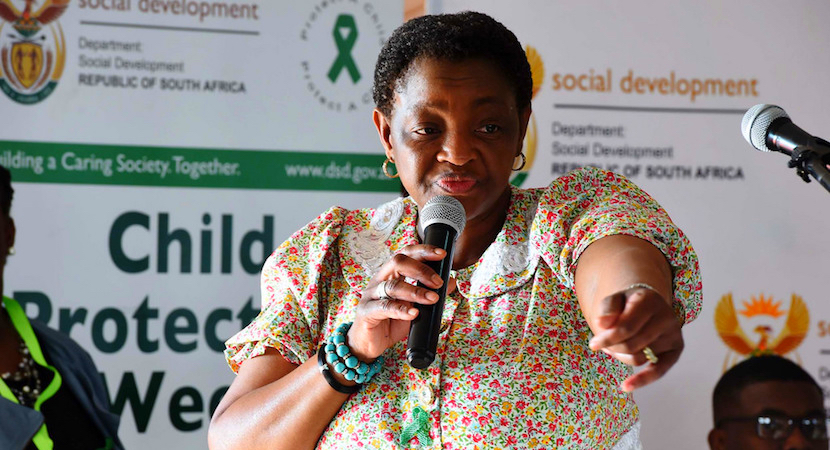 If you want the low-down on what’s going on behind the scenes at the South African Social Security Agency (Sassa), don’t miss the latest instalment from the intrepid journalists at amaBhungane. Delivered to email inboxes this morning were more explosive claims and damning evidence pointing to a web of corruption and deceit – all at the expense of South African taxpayers and the many social welfare beneficiaries on the other side of this payment equation. Central to the investigation is US-listed firm Net1, which uses its subsidiary Cash Paymaster Services’ (CPS) social grant contract as “a secret backdoor” to get grant beneficiaries’ information. An amaBhungane investigation shows that Net1 uses the information to make billions of rands selling loans, insurance and other financial products to grant beneficiaries. Net1’s executive chairman Serge Belamant has repeatedly denied all wrongdoing. Not only is Belamant incredibly poor at communicating with journalists, it seems he has been caught out lying by the amaBhungane team. Meanwhile, investigating Net1 has become something of a free-for-all, with political scientists and others adding their views. Even asset management entrepreneur Magda Wierzycka of Sygnia has taken time out of her busy schedule to probe reports for details. She has put private asset management house Allan Gray on the spot, questioning whether it was appropriate for it to invest in Net1 on behalf of its fund members. Wierzycka also highlights the involvement of Grindrod Bank in this saga. Expect this scandal to grow bigger before the social grants crisis is resolved. – Jackie Cameron

The social grants debacle in South Africa throws up a number of questions about the country’s state of politics, governance, leadership and democracy.

A fundamental question pertains to an undertaking made to the country’s Constitutional Court by the South African Social Security Agency (Sassa) that it would take over the distribution of social grants from Cash Paymaster Services (CPS), the private company it had contracted to do the job. This followed the court’s ruling that CPS contract was invalid because procurement processes had been flouted. Conscious of the catastrophic implications of the declaration, especially on the lives of 17 million recipients, the court suspended the invalidity.

Sassa, an agency of the Department of Social Development, is charged with the administration of grants. It originally told the court that it would take over the grant payments. It later admitted that it was not able to do so and would appoint a third party. The political responsibility for the department lies with Social Development Minister Bathabile Dlamini.

Three years ago Sassa indicated that it would have worked out an alternative arrangement within the time frame set by the court. But it is still not ready to take over the distribution of social grants. Ironically, as things stand, for the poor to get their grants in April the only option is CPS.

This begs a number of questions: was Sassa’s undertaking just a bureaucratic machination, with the connivance of the country’s executive authority, to enervate the court’s structural interdict? Wasn’t all this orchestrated to undermine the judiciary and the constitution by trumping justifications for what is sheer incompetence on the part of the Department of Social Development and Sassa? Their argument is that the judiciary cannot appropriate an oversight function over the executive action as this is the purview of parliament. The principle of the separation of powers is invoked to supposedly enhance this argument.

At face value, these narratives look plausible. Lurking beneath, however, is trickery to justify the executive’s truncation of the supremacy of the constitution. This is scary because the poor are caught in a contestation for state power and the country faces the risk of being pushed to a tipping point.

But the bottom line is that judicial intervention – in whatever way necessary to ensure that democracy achieves its substantive ends – becomes a duty in a situation where the political administrative accountability arrangements are weakened and good governance is endangered.

It’s a pity political leaders often don’t seem to understand this. To most politicians, judicial intervention is interference, irrespective of the context and exigency of the situation. The Sassa debacle lays bare this argument which has become a constant refrain of politicians, particularly those wanting to run away from accountability.

The government’s pathetic response to the crisis – from President Jacob Zuma to the minister herself – tells its own story. In a nutshell it has been: if there is a guarantee that grants will be paid in April, what’s all the fuss about?

This is an unfortunate take on the debacle. Writ large in this is the challenge of political illiteracy of those running the state. They see nothing and hear nothing, yet from this vacuity decisions are taken that have pernicious consequences. German poet Bertolt Brecht warns:

The worst illiterate is the political illiterate.

The nation’s angst should have prompted the president to act decisively. In other words, why is the minister of social development still in office? Zuma’s answer to this question was casual. He advised people to “cool down” because the grants would be paid.

But this is where the challenge is. The president does not seem to understand that what’s at issue is the failure of state institutions and their leaders to implement a court decision. This puts the supremacy of the constitution at stake. This is what makes the Sassa debacle as much about the distribution of social grants as it is about the constitution.

The debacle also raises a question about whether or not Zuma’s cabinet is in sync. This is because it has pitted ministers against one another, in particular the Minister of Finance Pravin Gordhan and Dlamini.

Gordhan has consistently argued that procurement processes should be followed and respected – precisely the order of the Constitutional Court. But it appears that the crisis has been choreographed to counter this. It has also been used to achieve other nefarious political ends: for example to put the backs of the crusaders of good governance – the court and the National Treasury – against the wall. It also appears that there’s been an attempt to pit the Treasury against the poor in a bid to perpetuate the narrative that it is counter-revolutionary and anti-development.

Behind this lies the contestation for control of state resources.

Beyond the political machinations lies the question: why, in the first place, did Sassa place the distribution of social grants in the hands of a private service provider which did not contribute to building the capacity of the state for this function?

This is at odds with the very concept of empowering and building state capacity.

A number of countries have done this through agencification which is considered an alternative to privatisation and a way of optimising public administration while at the same time defending the state from being hollowed out by private interests. It involves the creation of autonomous government agencies that aren’t restricted by the bureaucracy of ministries. Agencification brings “direct accountability and decision-making as close possible to the service delivery point” and enables flexibility in “administrative and operational arrangements”. It differs from arrangements where public services are placed in the private hands.

Isn’t this where the focus should be, as South Africa grapples with the Sassa debacle?

Sassa is institutionalised as state agency. But its core business is performed by a private entity while administratively it appears entangled in the political and administrative dictates of the department of social development, fully within the grip of the minister. This sullies its essence as state agency. It conjures up scary images of what Sassa really is: a conduit to siphon state money in the name of those on the margins of society, to “enrich the rich” and “damn the poor?”.