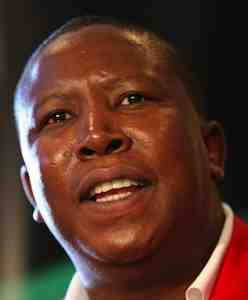 EFF leader Julius Malema says he is the “sweetest” and “coolest” guy and not a monster as portrayed by some, the Mail&Guardian reported on Friday.

“If you sit with me at a personal level, you are going to kiss me on my forehead. You will say: ‘This is not the person we are always told about, [that] he is a monster, and he is going to be Hitler’. I’m the sweetest guy. I’m the coolest guy,” he reportedly told the newspaper.

Malema was interviewed before the one year anniversary of his party, the Economic Freedom Fighters, on Saturday.

Malema told the M&G he did not have a temper problem, and had dealt with an incident involving a BBC journalist.

“I dealt with a white BBC journalist. That was not a reflection of a person who loses a temper. It was one incident. Why? He was displaying the mentality of a white supremacist.”

In 2010, Malema who was the then ANC Youth League president called journalist Jonah Fisher a “bastard” and an “agent” and kicked him out of a media briefing.