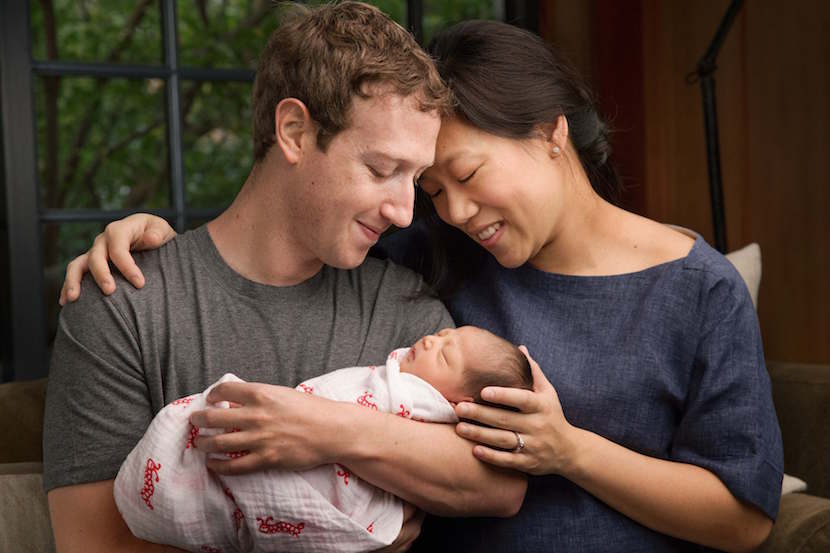 (Bloomberg) — Facebook Inc. Chief Executive Officer Mark Zuckerberg, whose wife just gave birth to a baby girl, announced plans to give away 99 percent of his stock in the social network during his lifetime to advance philanthropic causes.

The current value of the planned donation is $45 billion, Zuckerberg and his wife, Priscilla Chan, said in a letter to their newborn daughter, Maxima, posted on Facebook on Tuesday. The co-founder doesn’t plan to give away more than $1 billion a year for at least the next three years, the company said in a separate filing, meaning Zuckerberg will maintain voting control of Facebook for the foreseeable future.

Zuckerberg, 31, outlined his philanthropic mission, focused on “advancing human potential and promoting equality,” in the letter to his daughter, nicknamed Max. He will make long-term investments in areas like health and education, while working to decrease inequality and building technology to bring about change.

“Our society has an obligation to invest now to improve the lives of all those coming into this world, not just those already here,” Zuckerberg and Chan wrote in the letter.

It’s unusual for an executive to undertake such a broad philanthropic effort at so young an age. Warren Buffett, the chairman and CEO of Berkshire Hathaway Inc. who has committed almost all of his fortune to charity, has singled out Zuckerberg as someone who can set an example for a new generation of philanthropists.

Zuckerberg “has an audience that’s just totally different than what I would have,” Buffett, 85, said last year at a conference in Las Vegas. The Facebook co-founder previously signed the Giving Pledge, established by Buffett and Bill and Melinda Gates, in which billionaires agree to donate the majority of their wealth to charity.