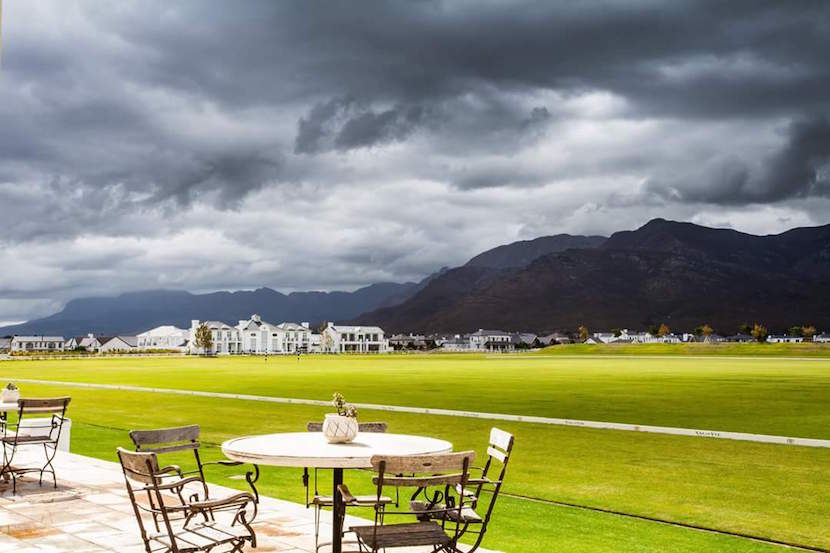 Founder and CEO of Val de Vie Estate, Martin Venter today officially announced that investment company, African Rainbow Capital (ARC) – recently founded by well-known businessman, Patrice Motsepe – has acquired a 20% stake in Val de Vie Investments. While ARC has made several investments thus far, this deal marks the firm’s first investment in the country’s residential property market. ARC is jointly headed by Johan van der Merwe, former CEO of Sanlam Investments and Johan van Zyl, former CEO of Sanlam, and is a subsidiary of Sanlam’s empowerment partner, Ubuntu-Botho Investments (UBI). This deal will support future developments on and around the estate, such as the construction of a bridge over the Berg River that will connect with the R45 provincial road.

Comments ARC Founder, Patrice Motsepe: “We see immense value in Val de Vie and are pleased to be involved with this world-class development and its visionary team. Last year, I had the privilege of attending the Sentebale Royal Salute Polo Cup at Val de Vie where we watched Prince Harry take part in a game of polo for charity. I was truly impressed by what the estate had to offer.”

Comments Martin Venter: “This is one of Val de Vie Investments’ most impactful deals to date. The fact that ARC, led by individuals with incredible economic and business savvy, has invested in Val de Vie is a sure indication of the promise of growth that the estate holds – and, on a larger scale, of the positive aspects that South Africa has to offer. We are equally pleased to be supporting black economic empowerment through this business decision.”

Situated in what many would term the country’s most sought-after region, in the Paarl-Franschhoek Valley, Val de Vie is forging ahead in the property market despite the country’s struggling economy. The estate remains an excellent investment, consistently producing impressive sales figures that speak for themselves. Developer stock to the value of more than R 1 billion has been sold in the past 18 months.

In recent weeks, a Val de Vie plot that measures 2 000 m2 was sold for R 9 million, indicating the high demand for property on the estate.

Comments Johan van der Merwe, co-CEO of ARC: “This property development is one that we believe is leading the way in South Africa. Its strength is evident in its sales and growth, and we are confident that these factors point to an excellent return on investment.”

Although South Africa has seen many families and individuals emigrate, there are likewise high numbers of families and individuals moving to the Western Cape from other provinces – a trend that has casually been termed ‘semigration’. According to New World Wealth Analyst, Andrew Amoils, the Winelands region including Paarl, Franschhoek and Stellenbosch is the fastest growing area in the country amongst US dollar millionaires.

The Western Cape boasts a plethora of outdoor activities, some of the world’s most beautiful beaches and top restaurants, incomparable scenery and cultural festivals, and is furthermore home to excellent government and private schools as well as internationally recognised universities. It is therefore not surprising that families are moving to the region for an improved lifestyle and better prospects for their children.

Val de Vie’s sales team confirms that approximately 75% of its buyers come from Gauteng and KwaZulu-Natal and have also experienced increasing interest from residents of the Eastern Cape, Bloemfontein and Rustenburg, as well as from other parts of the world. During the three weeks that followed the Brussels bombings in March 2016, Val de Vie received approximately 15 serious enquiries from Belgians wanting to leave the country permanently and move to the estate.

Venter adds: “Val de Vie is a popular choice amongst families from all corners of the country and the globe. Home to the ‘Safest House in Africa’, Val de Vie has something unique to offer in terms of security, lifestyle and location.”

African Rainbow Capital, under the directorship of billionaire Patrice Motsepe, has acquired an 18.14% stake in Metrofibre Networx.

Since its inception in 2006, Val de Vie has transformed the ground on which it is located from a desolate state to a stunning piece of land that now lives up to its name, meaning “Valley of Life”. In 2013, the estate partnered with Hein Koegelenberg and sold its wine cellar and a 25 ha wine farm to Perfect China. This partnership is now South Africa’s biggest exporter of wine. In another significant business deal, in March 2016, Val de Vie and a consortium of partners acquired Pearl Valley Golf & Country Estate from Standard Bank, creating a luxury “super-estate” under the Val de Vie brand.

The acquisition included the entire first phase of Pearl Valley, the Jack Nicklaus Signature Golf Course, the clubhouse, a hotel site on which the Mantis Collection Pearl Valley Hotel is being developed, a34 hectare equestrian farm, approximately 80 serviced and unsold plots as well as 120 un-serviced residential plots.

Venter continues: “In the past year, we have seen tremendous growth at Val de Vie and we anticipate that the deal with ARC will positively enable further development and expansion of the estate. The benefits thereof are, however, not limited to Val de Vie and its residents. As an economic driver in the Cape Winelands, Val de Vie is committed to the support and upliftment of less privileged communities in the Paarl-

Franschhoek Valley and the greater Winelands region. There is incredible synergy that exists with our current outreach programmes and Motsepe’s philanthropic interests.”

The estate has a long track record of carrying out social housing projects, based on the requirements and preferences of wine farm workers and those in need. Additionally, the Val de Vie Foundation was recently launched to offer youth and leadership development, to enable access to education, to facilitate job creation and to carry out projects of social and spiritual concern for the relief of communities in distress. To date over R 10 million has been raised and it is expected that another R 90 million will be added to this over the next eight years.

Venter concludes: “We have invested wholeheartedly in providing an environment in which life can be enjoyed to the fullest in this valley – and although we have already achieved this on many levels, we are pleased to say that, with the conclusion of this deal: the best is yet to come!”