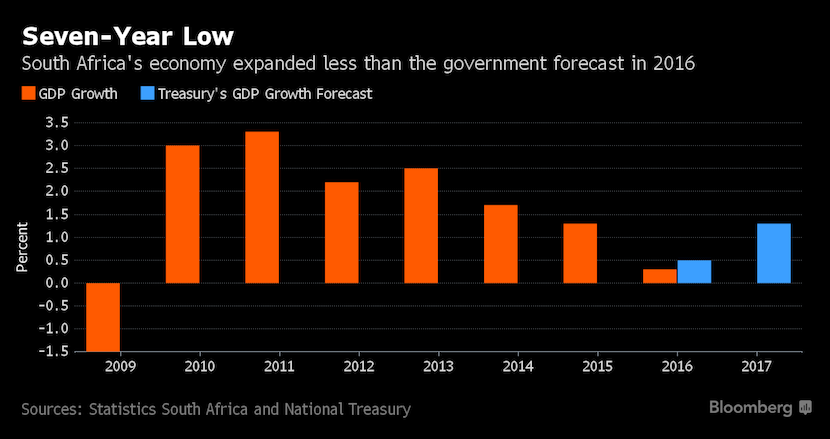 By Arabile Gumede and Amogelang Mbatha

Gross domestic product expanded 0.3 percent last year, the statistics office said in a report released on Tuesday in the capital, Pretoria. That’s less than the National Treasury’s forecast of 0.5 percent and the slowest rate since a recession in 2009.

Policy uncertainty caused by political turmoil, including the now-dropped fraud charges against Finance Minister Pravin Gordhan, hampered attempts to implement reforms aimed at boosting output in Africa’s most-industrialised economy. Slow economic growth is one of the key risks to the nation’s investment-grade credit assessment highlighted by companies such as S&P Global Ratings last year. S&P and Fitch Ratings Ltd. both kept their evaluations of the nation’s debt at one level above junk.

“It’s very important that politics remain stable because we know that ratings agencies are looking at us very very closely at the moment,”  Jeffrey Schultz, an economist at BNP Paribas Securities in Johannesburg, said by phone. “We need to show signs that the economy is turning the corner and that we are actually on the right growth path to improve GDP numbers and that the economy can be labor-absorbing.”

The economy contracted an annualised 0.3 percent in the three months through December after expanding a revised 0.4 percent in the previous quarter. The median of 18 economist estimates compiled by Bloomberg was for no growth.

The lacklustre economy complicates the government’s pledge to reduce the 26.5 percent jobless rate. Gordhan said in his budget speech to lawmakers last month that economic transformation to tackle inequality and poverty and growth were inextricably linked.

Output was weighed down by a slump in commodity prices, a continuation of the worst drought since records began in 1904 and weak demand for the country’s exports last year. The mining industry contracted an annualised 12 percent from three months earlier, while manufacturing shrank 3.1 percent, the agency said. Agriculture contracted 0.1 percent, the eighth consecutive quarter of decline.

“The significance is that the South African economy has not registered any signs of improvement and we are really falling behind our own growth plans,” Michael Manamela, chief director of national accounts at the statistics office, said in an interview in Pretoria. “South Africa’s economy is a global player so we are quite dependent on the global demands from other economies, so our recovery will largely depend on how they are performing as well.”

After falling to a three-decade low in September, business confidence rose the following three months. The purchasing managers’ index was above 50 in January and February, indicating expansion in the manufacturing industry. Economic growth will probably rebound to 1.3 percent in 2017, according to National Treasury forecasts.

“The confidence of business and consumers was severely impacted by political infighting,” Mike Schussler, an economist at Johannesburg-based research company Economists.co.za, said by phone. “Businesses are reluctant to invest, because of fears in the political climate.”

The rand strengthened 0.4 percent to 12.9627 per dollar by 1:27 p.m. in Johannesburg. Yields on rand-denominated government bonds due December 2026 fell two basis points to 8.66 percent.