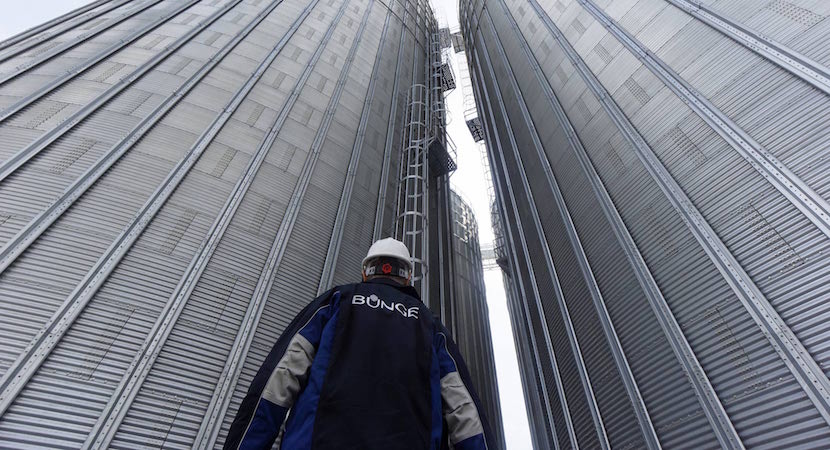 (Bloomberg) – Glencore Plc’s approach to U.S. grain trader Bunge Ltd. highlights how much the Swiss commodity giant is longing to increase its dominance in the Americas and bust up the stranglehold exerted on the industry by four key players.

Glencore said in a statement Tuesday it approached Bunge about a potential “consensual business combination” and there’s no certainty that a deal will happen. Shares of the U.S. company surged, giving it a market value of $11.5 billion. Bunge later said it isn’t engaged in “business combination discussions” with Glencore or the company’s agriculture unit.

A combination, if it happens, would create one of the world’s largest agricultural traders, with assets in locations including Brazil, Australia, Russia and Canada. It would be a powerhouse in soybeans, wheat and sugar, with a large presence in the trade flows between Latin America and food importing nations such as China. The deal would also mean a sea change in an industry that for the past century has been dominated by the so-called ABCD quartet of Archer-Daniels-Midland Co., Bunge, Cargill Inc. and Louis Dreyfus Co.

“It’s an acquisition for corporate strategy” rather than synergy, Steve Laveson, a portfolio manager for Becker Capital Management in Portland, Oregon, said in a telephone interview on Tuesday. Becker owns more than 630,000 shares of Bunge.

It’s no secret that Glencore, led by billionaire Ivan Glasenberg, has been on the hunt for assets in the U.S. grain industry. Glencore’s Chris Mahoney, who runs the agriculture unit, said in an interview with Bloomberg News published earlier this month that the company was having trouble finding “ willing sellers.” Within a day of those comments, Bunge Chief Executive Officer Soren Schroder indicated to analysts on an earnings conference call that his company would be open to participating in industry deals.

A Glencore deal for Bunge would make the Swiss mining giant a major player in the U.S. agriculture markethttps://t.co/4egpDiZVJo

“I think it’s very much ABCD and G now,” Mahoney, 58, said in the interview at his office in central Rotterdam, just inland from Europe’s biggest port. Glencore is already the world’s largest wheat trader and biggest merchant of pulses such as chickpeas.

The deal would give Baar, Switzerland-based Glencore access to Bunge’s vast networks of trucks, barges and elevators, including infrastructure throughout North and South America. Almost 40 percent of Bunge’s long-terms assets are in Brazil, where Glencore has expanded through a purchase earlier this year of a sugar mill.

Shares of Bunge closed 17 percent higher at $81.70 Tuesday after Glencore confirmed its interest, the stock’s biggest gain since 2008. Bunge’s shares drifted to $78.95 in after-hours trading before Bunge’s statement saying it wasn’t in talks with Glencore. 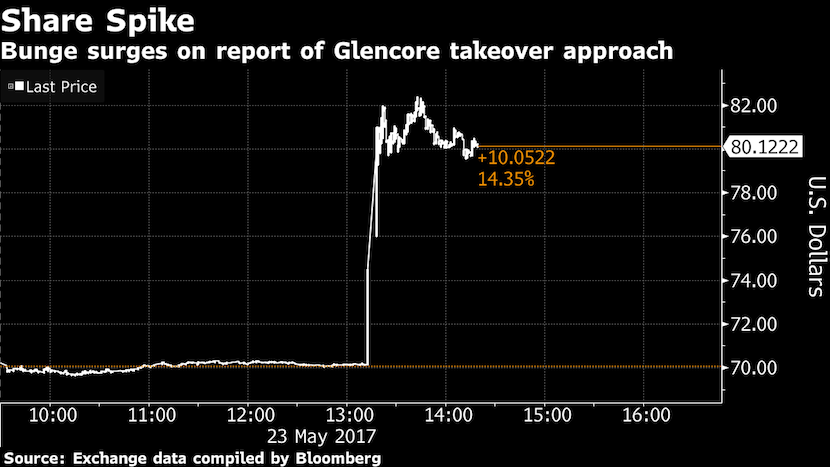 “Bunge is committed to continuing to execute its global agri-foods strategy and pursuing opportunities for driving growth and value creation,” the White Plains-based company said in the statement.

Glencore may have to pay more than $100 per share to buy Bunge, Vertical Research said in a report.

“People look at us just like we look at everybody else every day,” Schroder said in an interview earlier this month. “I am not surprised. We are a very attractive company.”

In contrast, the grain-handling industry has seen relatively little deal-making over the period. ADM stands out as the exception, with the Chicago-based company selling its stake in GrainCorp Ltd., eastern Australia’s largest grain handler, after its takeover bid was blocked. It now ranks as the largest shareholder in palm oil-grower Wilmar International Ltd.

“Consolidation is desperately needed,” and would be “constructive” for margins, Heather Jones, a Richmond, Virginia-based analyst for Vertical Group, said in a telephone interview on Tuesday. “Bunge seems the most obvious target. It’s more digestible than some of the other properties out there.”

The last time there was a round of mergers in the industry, it wasn’t the ABCDs that led the way, but Glencore, which bought Canadian grain merchant Viterra Inc. for C$6.1 billion ($4.5 billion) in 2012, and Japan’s Marubeni Corp., which acquired Gavilon Group LLC for $2.6 billion the following year.

Glencore spun off its agriculture unit after its existential crisis in late 2015 when commodity prices plunged and debt concerns sent the stock tumbling to a record low. In part to weather the storm, Glencore sold 49 percent of its agriculture unit to two pension funds — Canada Pension Plan Investment Board and British Columbia Investment Management Corp. — for $3.1 billion.

The sale created a new company with its own balance sheet, which isn’t guaranteed by Glencore itself. The business reported earnings before interest, taxes and depreciation, attributable to Glencore, of $592 million last year, compared with $830 million for Dreyfus, the smallest of the ABCD companies.

Mahoney, who won a silver medal in rowing at the Moscow Olympics in 1980, attempted another big agriculture deal in 2011, exploring a merger with Louis Dreyfus. The companies, after several weeks of talks, were several billion dollars apart in valuation and the deal never happened.

Peter Grauer, the chairman of Bloomberg LP, is a senior independent non-executive director at Glencore.