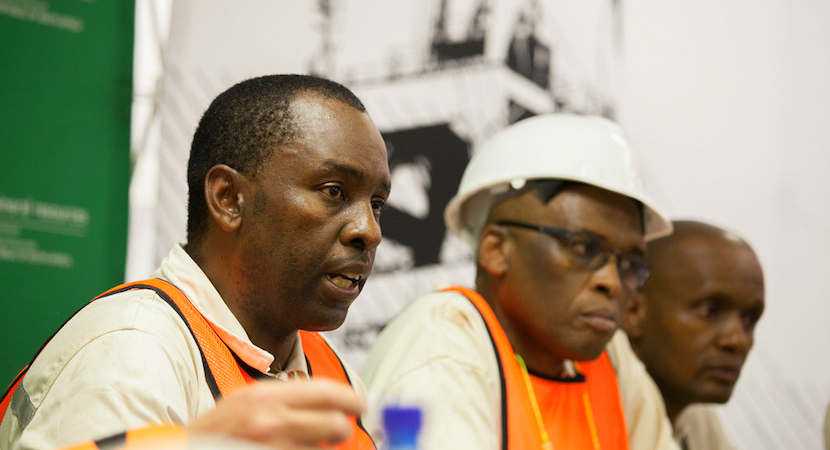 (Bloomberg) — South Africa’s Chamber of Mines said it will refuse to attend a last-minute meeting with the government on Thursday as the mines minister prepares to release revised regulations for the industry.

A process to review and amend South Africa’s mining charter “has been concluded” and Mineral Resources Minister Mosebenzi Zwane will hold a press briefing at 10:00 am in Pretoria, the capital, on Thursday, the Department of Mineral Resources said in an emailed statement on Wednesday.

The Chamber of Mines, which represents the nation’s biggest operators including Anglo American Plc and Sibanye Gold Ltd., received an invitation on Wednesday afternoon for a meeting with the ministry that is scheduled for an hour before the start of the press briefing, the industry lobby said in an emailed statement.

The chamber “will not be co-opted into participating in an attempt by the department to provide any support into what we believe has been a flawed process,” it said in the statement. The ministry has “not seen fit” to engage properly with stakeholders about the content of the charter, the chamber said.

A draft version of the charter released in April 2016 said all local assets must be 26 percent black owned, irrespective of deals done to increase ownership in the past. As many black investors have since sold out of these deals, that would mean companies would have to sell additional stakes, potentially diluting existing shareholders. Zwane was proposing that the minimum level for black shareholding should be raised to 30 percent, drawing opposition from some ruling-party officials who fear it will deter investment, two people familiar with the situation said last month.

Press statement from Chamber of Mines:

Johannesburg, 14 June 2017: The Chamber of Mines this afternoon received an invitation from Mineral Resources Minister Mosebenzi Zwane to attend a meeting of the Mining Industry Growth Development and Employment Task Team (MIGDETT) at 9:00 tomorrow, 15 June 2017.

The notice for the meeting is less than 24 hours and the exact purpose of using MIGDETT is highly suspicious. The MIGDETT meeting is scheduled to take place an hour before a media briefing called by the Minister to discuss the new DMR Reviewed Mining Charter whose publication is expected tomorrow.

As many would recall, MIGDETT was the forum through which the 2010 version of the charter was negotiated in a highly intensive, inclusive and consultative multi-stakeholder process. The Chamber will not be attending the MIGDETT meeting tomorrow. Its Office Bearers will not be coopted into participating in an attempt by the DMR to provide any support into what we believe has been a flawed process by the DMR.

The Chamber has repeatedly expressed its dismay that the Minister and DMR have seen fit not to engage with stakeholders in the same way this time round including through the MIGDETT structure, which has in fact been dormant for the past 18 months.

Occasional meetings with individual stakeholders over a lengthy period are no substitute for a proper process that needs to achieve the buy-in of all stakeholders, and in particular the mining industry whose responsibility it is to implement the charter’s provisions. The Chamber will follow tomorrow morning’s events closely, and will review the DMR’s Charter once it has been made available.