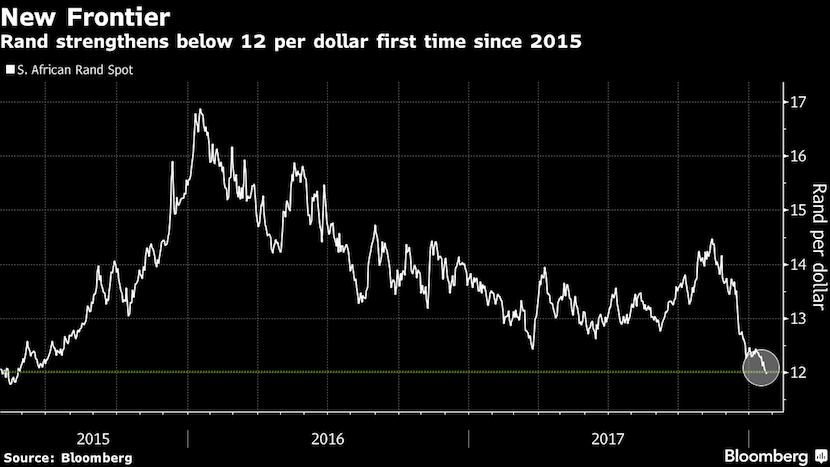 Bloomberg – South Africa’s rand traded below 12 per dollar on Wednesday for the first time since May 2015, extending a rally sparked by an improving domestic political environment and supported by global risk-on sentiment and the greenback’s retreat.

The currency advanced 0.5 percent to 11.9711 per dollar by 10.45 a.m. in Johannesburg, bringing gains in the past three months to 15 percent, the most out of 31 major currencies tracked by Bloomberg. The yield on rand-denominated government bonds due December 2026 fell four basis points to 8.32 percent, the lowest since March.

The election of Cyril Ramaphosa as head of the ruling African National Congress in December, setting him on a path to take over from President Jacob Zuma, has fueled optimism South Africa may avert further credit-rating downgrades as the new leadership takes steps to root out corruption and stimulate the ailing economy. Inflows into the nation’s stocks market are running at record levels.

“Investors are loving us at the moment,” said Phillip Pearce, a trader at TreasuryOne Ltd. in Johannesburg. “The dollar is taking a pounding and global markets are still on the hunt for yield. There’s not a lot of risk going now. South Africa seems like a good bet.”

The rand could appreciate to as low as 11.50 per dollar if Zuma is removed from office, Pearce said.