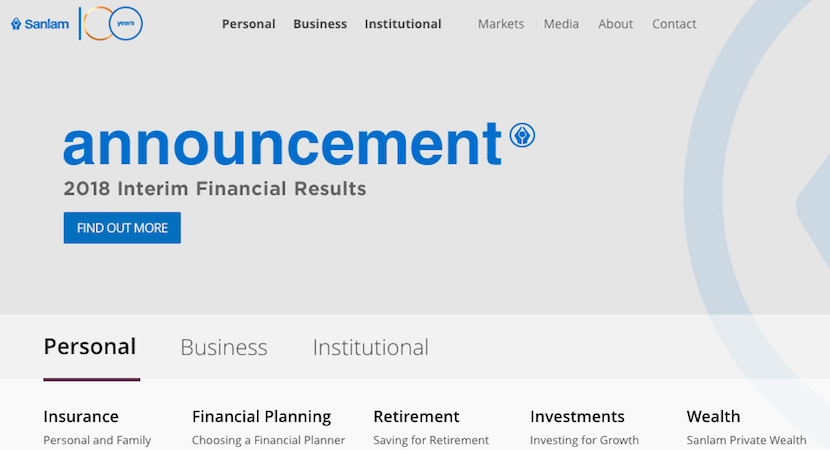 The Group, which in 2018 celebrates 100 years since it was established in 1918 and 20 years since it was listed on the Johannesburg and Namibian Stock Exchanges, attributed the performance to its well-diversified profile across geographies, market segments and client offerings.

Some key features of the 2018 interim results included:

Sanlam Group Chief Executive Officer, Mr Ian Kirk said: “We are satisfied with our performance in a challenging operational environment. Our continued focus on managing operations prudently and diligently whilst executing on our strategy enables us to consistently deliver value to all our stakeholders. The acquisition of the remaining stake in SAHAM Finances is progressing well. Our plan remains that part funding for this transaction will be through a 5% share issuance to a Broad-based Black Economic Empowerment vehicle, which will enhance Sanlam’s direct black shareholding to a leading position, placing us in a good position to attract increased institutional business in South Africa.”

SPF delivered a resilient performance for a mature business in an environment of low economic growth and a weak equity market performance. The 2% decline in its net result from financial services is largely attributable to the initial losses from new growth initiatives, including BrightRock. Excluding these, net result from financial services increased by 2%. Investment market volatility and increased new business strain also placed pressure on fee income.

SPF’s value of new life business increased by a resilient 6% (10% on a comparable economic basis).

SEM grew its net result from financial services by 18% including structural activity and exchange rate differences. Organic growth in constant currency amounted to 17%.

New business volumes increased by 13% (up 7% in constant currency and excluding structural activity), with all regions contributing to the growth apart from Botswana, which recorded a decline from a high base in 2017.

Net value of new business at SEM declined by 12% (down 9% in constant currency). Excluding structural activity, VNB increased by 10% in constant currency. All regions contributed strong organic growth, apart from some East African businesses, where an underperformance in life business had a negative impact on VNB.

SIG reported a decline of 9% in net result from financial services (7% in constant currency), with declines at the Investment Management SA and International businesses more than offsetting satisfactory growth from the Wealth Management sub cluster. Low growth in assets under management and lower performance fees impacted on its performance.

Santam increased its net result from financial services by an exceptional 70%. A benign claims environment in the first half of 2018 contributed to an overall 8.4% underwriting margin for conventional business, which exceeded the upper end of its 4% to 8% target range. The 2018 half-year results include claims relating to the listeriosis outbreak early in 2018.

Net earned premiums increased by 5%, with high levels of reinsurance in the alternative risk and specialised lines.

Sanlam Corporate’s net result from financial services increase of 26% is the aggregate of 22% organic growth and a 4% contribution from the first-time inclusion of ABSA Consultants and Actuaries, which was acquired effective 1 April 2018. Sanlam Employee Benefits’ (SEB) contribution increased by 33% and the Healthcare business increased its profit contribution by a satisfactory 16%.

Congratulations to all the winners tonight and thank you to all financial journalists who entered the 2017 #SanlamAwards pic.twitter.com/qiWSkJAan7

The cluster grew new business volumes by 25%. The pipeline of new business for the remainder of the year is promising, with R5 billion of single premium business already concluded subsequent to the end of June.

Net value of new business declined due to lower annuity single premium business. The performance is expected to improve in the remainder of the year in line with the large new mandates concluded subsequent to 30 June 2018 and a further good pipeline of new business.

The acquisition of the remaining stake in SAHAM Finances will require total funding of R13 billion after allowing for an R864 million contribution from Santam to increase its effective interest in SAHAM Finances from 7% to 10%, which exceeds the current balance of available discretionary capital. The dollar commitment is hedged at an average rate of R13.24. A 5% share issuance is planned to provide the remaining funding, restore the discretionary capital balance to an appropriate level for funding of bolt-on acquisitions and provide Sanlam with a leading direct black shareholding.

The Group reported that the conclusion of the acquisition of the remaining stake in SAHAM Finances is progressing well, with regulatory approvals in several jurisdictions already received. It is anticipated that any outstanding conditions will be met and the transaction concluded during the last quarter of 2018, in line with the original timetable.

Looking forward, the Group said economic growth prospects in South Africa are not expected to improve for the rest of the year and will continue to impact efforts to accelerate organic growth. New initiatives such as the Capitec Bank agreements as well as the conclusion of investment-related mandates of R5 billion by Sanlam Corporate are expected to support operational performance in the second half of the year.

“We remain focused on executing our strategy. We are confident that we have the calibre of management and staff to address the current challenges anticipated in the second half of the financial year,” Mr Kirk concluded.