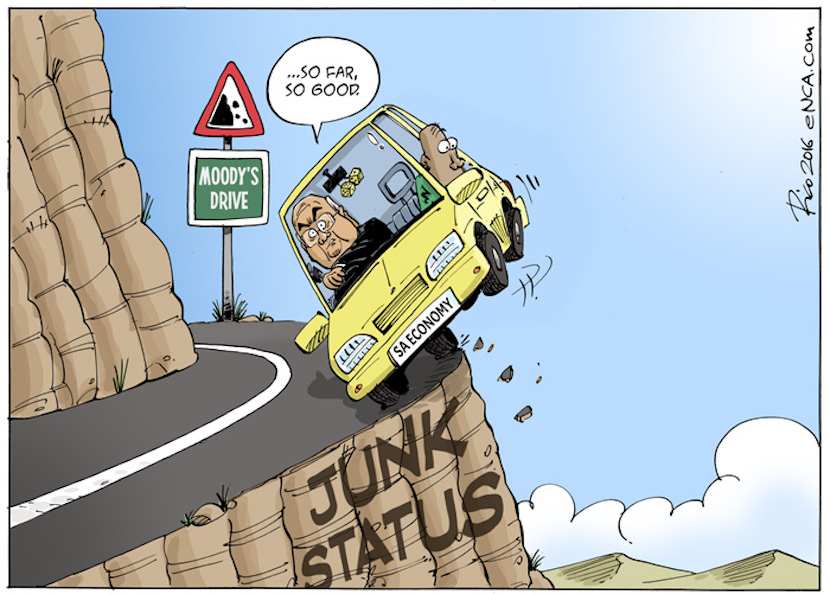 This week’s Medium Term Budget speech will most likely be the country’s most watched. The man delivering it, Finance Minister Pravin Gordhan, is currently facing ‘trumped up’ charges of fraud, as the political elite seek to protect personal interests. While the local public will watch with hands in pockets as there could be mutterings of increased taxes, specifically targeting the wealthy, as revenue shortfalls need to be filled up come February next year. And from a global standpoint, it’s the rating agencies that will have a keen eye on proceedings, as they look for triggers to maintain or downgrade South Africa. But what can we expect from Pravin? Well respected economist Nazmeera Moola penned the below preview, citing the need for a good budget but saying there’s not enough to avoid the inevitable slide to junk. – Stuart Lowman

When Standard & Poors gave South Africa a stay of execution in June, they cited three factors that would result in a ratings downgrade in December. First and foremost, their key long-term measure is the country’s growth rate, which would need to show improvement. On this point, growth has picked up somewhat, but not nearly as much as it could have had there been less political uncertainty.

The second factor is whether there is a weakening of institutions due to political interference that would affect the government’s policy framework. The third point relates to whether net general government debt plus government guarantees to financially weak government-related entities together would surpass 60% of GDP throughout the forecast period through 2019.

The mini-budget presented this week will be especially important for the latter two.  While a good budget will provide some comfort regarding these two factors, the budget in itself cannot save South Africa. A good budget will be necessary but possibly not sufficient to avert a downgrade if there is a deterioration in the factors cited.

The single most important feature of the budget we would like to see next week is commitment to the expenditure ceiling, the element most within the control of Government. They committed to containing expenditure in the February budget and we cannot see slippage on that score.

Secondly, we need clarity on the profile of the budget deficit – specifically the primary deficit (the government deficit before interest payments) – over the next three years. The consolidated primary deficit was forecast to move into a small surplus in the current financial year but given that revenues are running behind targets we may see some slippage into a small deficit. This will be acceptable on the condition that South Africa moves into primary surplus in the next financial year.

Finally, we will need to see a stabilisation in the debt to GDP ratio over the course of the medium term expenditure framework. As stated above, the rating agencies do not want to see consolidated debt breaching 60% in the forecast period. This number is currently in the low 50% and barring any irresponsible liabilities, it shouldn’t breach 60%.

Looking ahead to next year’s budget, the shortfalls in tax revenues this year raise concerns. There is a good chance that Treasury is going to have to budget for tax hikes in the new year that are beyond what they implemented this year. In February they stated that they would look for another R15 billion in revenue-raising measures in the 2017/2018 financial year; it now looks like that will need to be increased to R25 billion. The upshot is that they will either have to cut expenditure dramatically, or look beyond bracket creep adjustments and sugar tax.

Underlying the revenue shortfalls is the poor growth rate. The reason tax revenues are disappointing is because growth is disappointing. This is where politics comes into play. Since 1980 there have been six periods during which private sector fixed investment contracted – three times as a result of global shocks (more recently the Asian Crisis in the late 1990s and the Global Financial Crisis in 2009) and three time as a result of domestic uncertainty. We are currently experiencing the first politically induced contraction since the dawn of democracy.

As soon as there are a couple of months of stability like we saw between May and August, the data improves, so there is pent up demand and the economy wants to grow.  However, as we have seen again this month, it is very fragile. This is why political stability is so important.

If Gordhan were to be removed, the concern would be that he would be replaced by someone who does not have the same commitment to fiscal discipline.