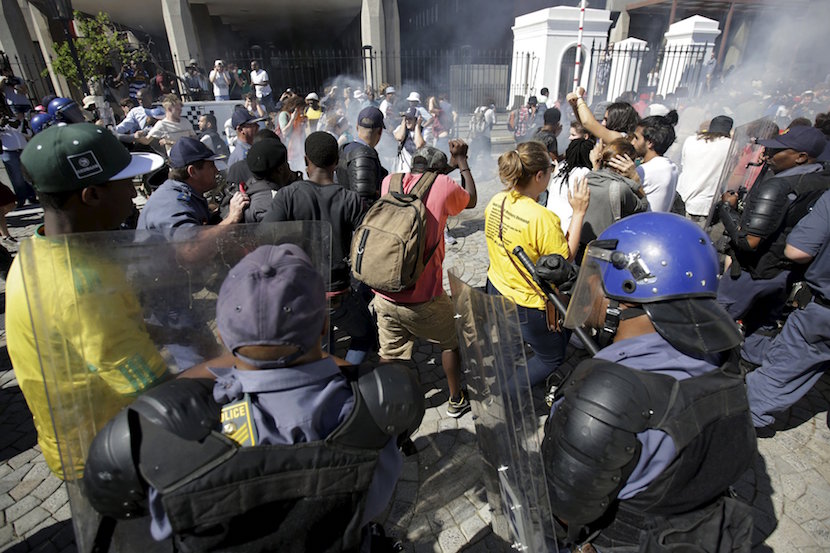 Those who tuned in for live television coverage of Finance Minister Nhlanhla Nene’s Mini Budget speech got a lot more than they bargained for. Proceedings were first disrupted by red-overalled members of the Economic Freedom Fighters party – who had to be forcefully ejected from Parliament – and then by hundreds of university students outside who unsuccessfully tried to storm the building. Riot police were initially caught napping, but then fired off six stun grenades, scattering students who had broken through Parliament’s gates. The students had picked up the EFF’s chant of “Fees must fall” and a little later started chanting for the Higher Education Minister Blade Nzimande to address them. He did not appear. eNCA anchor Andrew Barnes, on the steps of Parliament, opined: “It is certainly victory to the students today whose express intention was to disrupt the Parliament speech. They succeeded.”  After half an hour the riot police fired off more stun grenades, eventually getting the students out of the Parliamentary precinct. Inside, the entire Parliamentary precinct has been put into “lockdown”.  – Alec Hogg

The currency of Africa’s most industrialized economy tumbled 1.6 percent to 13.5182 per dollar by 3 p.m. in Johannesburg, falling the most among 31 emerging market and major currencies tracked by Bloomberg after Russia’s ruble. Yields on bonds maturing in December 2026 jumped 14 basis points to 8.41 percent, the highest since Oct. 1.

Nene, 56, is seeking to balance support for a sluggish economy and safeguard the nation’s credit rating as it hovers near junk and tax revenue falls short of what he predicted eight months ago, pushing up fiscal deficit targets. Police fired stun grenades at protesters at parliament in Cape Town on Wednesday, while Nene continued presenting his mid-term budget, in which the National Treasury cut its growth forecast for this year to 1.5 percent from 2 percent.

@BizNewsCOM @alechogg Maybe Hlaudi Motsoeneng should be joining the striking students so that he can get a matric and then find a varsity.

As chaos erupted around the building, Nene, standing calmly at the podium inside the chamber, continued to read his speech, in which he outlined the gloomy outlook for Africa’s most advanced economy.

The speech was delayed by 45 minutes as MPs from the opposition Economic Freedom Fighters (EFF) party raised multiple questions of order, arguing the budget should be delayed because of a spate of student protests over a hike in tuition fees.

Scuffles broke out as parliamentary security guards were eventually called in to remove the EFF members by force.

Many of South Africa’s universities have been hit by protests, some of them violent, in the last week by students demanding that a hike in tuition fees by as much as 11 percent be scrapped.

University bosses said the increases were needed to maintain standards, and called on the government to find the extra funding.

Chaos as protesting students force their way into Parliamentary precinct

Cape Town – Protesting University of Cape Town and Cape Peninsula University of Technology students forced themselves into the Parliamentary precinct on Wednesday, while the National Assembly was in session for Finance Minister Nhlanhla Nene’s mid-term budget speech.

Students were shouting for Higher Education Minister Blade Nzimande to address them and gathered at one of the precinct’s gates, where they threw water bottles at police.

However, as student numbers swelled at one of the Parliamentary gates, police did not call for reinforcements.

Eventually, through weight of numbers, they managed to force their way into the Parliamentary precinct up to the doors of the Parliament building, where students clapped, chanted, and sang.

Once on the property, they resumed their chant for Nzimande to address them.

Police guarded the doors as students stood in front of them, talking to police, who pushed them back using their riot shields from the doorsteps of Parliament.

Shortly afterwards, after tensions rose between students and police, it appeared teargas was fired, causing students to flee the property. Scenes on television showed students running from the scene amidst smoke.

This was taking place as Nene began his speech, following a disruption from Economic Freedom Fighters members, who attempted to halt the speech by shouting “Fees must fall” before they were removed from Parliament by security officers.

The number of the students who had gathered at Parliament prior entering the property numbered several thousand, and built up over the course of the day as students descended from their campuses.

It was not clear why further police were not called in to deal with the swelling number of students. – News24

Earlier, the students burned tyres outside the building, as public order policing dressed in riot gear looked on from behind a police line.

ANC MP Loyiso Mpumlwana was seen chatting with some student leaders outside Parliament, who, with their peers, were heard shouting “Down with 6%, down with fees, down”.

The chants were in reference to the deal struck by Higher Education Minister Blade Nzimande and university vice chancellors on Tuesday after a marathon meeting in the Mother City, where they agreed fee increases for 2016 would be capped at 6%.

Outside Parliament, students called for unity among themselves, with many climbing on the statue of Louis Botha at the end of Roeland Street, which with Plein Street was closed off to traffic, as legislators entered Parliament for Nene’s speech.

Call for Nene to address students

Sibusiso Twala, student representative council president at CPUT, addressed the students outside Parliament. Students want the respective varsity management teams to address them, along with Nene himself.

He said the party would ask Nene about it during the sitting on Wednesday.

However, students did not take kindly to Shivambu only speaking to media, chasing him away shortly afterwards, shouting “EFF must leave”, and “We want Blade”.

It was also believed that 10 000 CPUT and University of Western Cape students had gathered at CPUT’s Belville campus, north of Cape Town.

Meanwhile, at Stellenbosch University up the N2 highway, students had gathered in the Rooiplein to hear each other’s experiences.

One speaker, from the Democratic Alliance Students Organisation (DASO), said: “[The] 6% increase is not low enough. The money must come from the state. Where is Blade Nzimande?”

A legacy student, whose mother was one of the first coloured students at Stellenbosch University, told the crowd: “This is everybody’s problem. I am reliant on NSFAS [National Student Financial Aid Scheme]. At graduation, I won’t get a degree. I will get an invoice that says ‘You owe me’.”

Medical students from the university’s Tygerberg campus also later joined the gathering, with one student telling those assembled: “I am paying R45 000. Next year i must pay R73 000. From where?”

Another student said, “This is the bastion of apartheid. The Broederbond must fall.”

The protests flared up after students at the University of the Witwatersrand last week protested against a 10.5% fee increase for the 2016 academic year.

The University of the Free State closed all three of its campuses on Wednesday, with varsity management and the student representative council meeting on Tuesday to discuss next year’s fees.

At NMMU, police fired rubber bullets at protesting students throwing stones at the institution on Wednesday, according to police spokesperson Brigadier Marinda Mills.

She said no one was arrested or injured. – News24