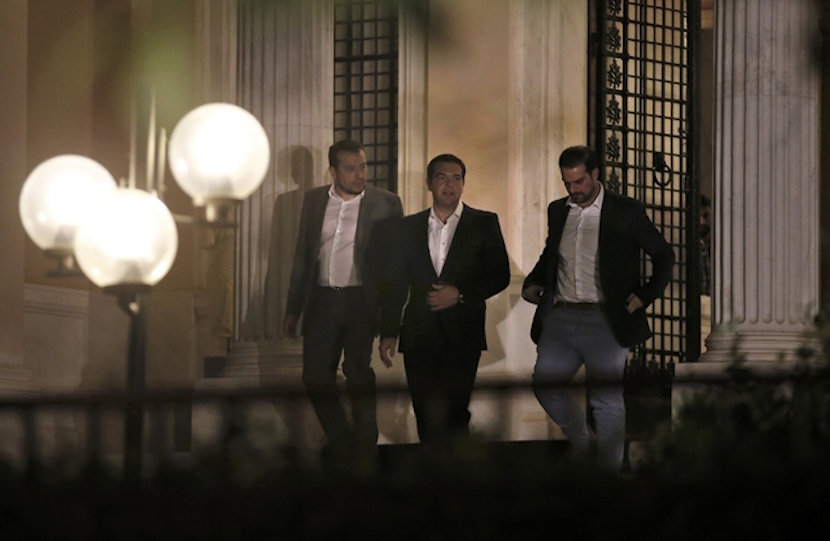 Greece’s 40 year old Prime Minister Alexis Tsipras took duplicity to a new level last night when he told his nation the only reason he agreed to the EU’s fresh loan demands was because he had “a knife on my neck.” By defending his U-turn on national television, this astonishingly self-absorbed politician is digging Greece deeper into the sinkhole he and political predecessors have made for the Mediterranean nation. A statesman would have told the truth. That there is no option but to reform. That Greek politicians lied to get into the EU, fiddled its books to stay in, and has been relying on handouts from other European taxpayers for almost a quarter century to keep its unaffordable socialist system going. Instead, Tsipras’s only motivation is self-preservation. The Greek Parliament votes today. By attempting to justify himself, Tsipras may have committed his biggest blunder in an already long series. One his people could end up paying for many times over. – Alec Hogg

(Bloomberg) – Greek Prime Minister Alexis Tsipras started his pitch for a bailout that’s sparked a revolt in his own party and is struggling to get off the ground as international officials ask new questions about the country’s finances.

As Tsipras went on national television to argue for a deal that he only agreed to with “a knife on my neck,” European officials are at a loss on how to put together a bridging loan that will keep Greece from defaulting on the European Central Bank and its own citizens next week.

One person familiar with the matter said that Greece’s finances seem to get worse with every meeting and governments are now reluctant to help out with even short-term funds.

“The Greek government has not received a bridge-financing program yet because some try to block this,” Tsipras said in an interview with ERT-TV before a parliamentary vote on the deal on Wednesday. “My priority is to make sure that the choice I made the other day, with a knife at my neck, is finalized.”

Greece’s situation is worsening as capital controls ravage an economy already in the middle of a double-dip recession. Those measures have exacted a “heavy toll” and have lead to a dramatic deterioration of Greece’s ability to repay its debt in the past two weeks, a new analysis by the International Monetary Fund showed on Tuesday.

Tsipras portrayed the package of austerity as unavoidable because the alternative was leaving the euro. In return, all Greece’s mid-term financing needs will be covered and talks over debt restructuring could even start in the fall, he said.

Tsipras’s comments set up a day of parliamentary maneuvering that threatens to rupture his coalition. Still, opposition lawmakers are likely to back the package at a plenary vote scheduled for about 10 p.m. local time Wednesday.

European stocks rose and peripheral government bond yields declined in Italy and Portugal on Tuesday. Stocks rose in Asia for a fifth day.

Hurdles remain, among them disagreement over how to finance Greece through the next few weeks. Next week alone, the Greece needs to pay 3.5 billion euros ($3.9 billion) to the ECB, with pensions and state salaries also needing to be paid.

“We are looking at all the instruments and funds that we could use and all of them seem to have disadvantages or impossibilities or legal objections,” Dutch Finance Minister Jeroen Dijsselbloem, who chairs meetings of his euro-area counterparts, said in Brussels.

Ratification must also be secured in six other parliaments, among them the German lower house, or Bundestag, which will be reconvened on Friday from its summer recess.

For now, attention will focus on Athens as Tsipras tries to steer the measures past his coalition of Syriza and the Independent Greeks. Discussion will begin at committee level at 10 a.m. and then move to a plenary debate at about 2 p.m.

Tsipras said the package won’t result in cuts to wages or pensions. Sales-tax increases are “irrational” but unavoidable to satisfy creditors, while a reform of the pension system was overdue regardless of the terms laid down, he said.

Greece “does not have the required currency reserves to support a return to the drachma,” he said in the interview.