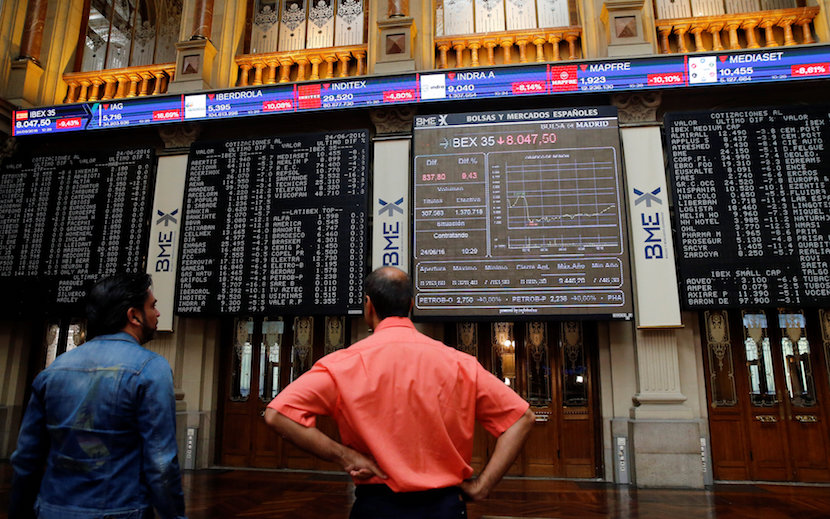 So while 52 percent of the voters decided Britain was better off outside the European Union, there’s now a petition of over a million signatures wanting to have another go. Fascinating how once the outcome is a negative one, certain individuals want to shift the goal posts in their favour. And while there may be further complications around the referendum result, investors (both home and away) and citizens of the country need to plan for life outside the EU. The Bloomberg article maps out a strategy for the coming months, which has a big focus on treasuries. – Stuart Lowman

(Bloomberg) — Britain’s vote to leave the European Union almost a quarter century after its creation with the  Maastricht Treaty left global markets in disarray Friday. Today, investors start to figure out the way forward.

“Ultimately, we have no experience in what will happen next,” Glen Capelo, managing director at Mischler Financial Group Inc., who has spent the intervening years on various trading desks, said in a note to clients. “Twenty-three years of positions may now need to be unwound,” he added in an e-mail.

While investors were caught off guard by the vote, several themes emerged from the frantic trading and onslaught of research reports. This market map for the coming months may or may not lead to treasure but almost certainly involves Treasuries:

On a more hopeful note, Kleintop compared the current selloff to those following Japan’s March 2011 earthquake, the U.S. debt-ceiling standoff that August and the 2012 euro zone recession triggered by the debt crisis. All three markets declined at least 11 percent. “It is important for long-term investors to note that in each of these instances stocks rebounded to their pre-shock level in three or four months,” Kleintop said in a note.

RBC Capital Markets suggested investing in Nordic banks including Danske Bank A/S, Swedbank AB and DNB ASA because “they have relatively low beta and their earnings should be more resilient.” Strategists at Wells Fargo Investment Institute predicted the U.S. dollar will emerge unscathed, helping U.S. companies that sell overseas, and stood by a 2016 target for the Standard & Poor’s 500 Index that implies a 7.5 percent gain from Friday’s close.

And there are always the companies that produce the premier safe-haven asset. The MSCI ACWI Select Gold Miners Index rose about 6 percent on Friday, reaching its highest level since March 2014.

The largest risks in the foreign-exchange markets involve commodity-rich countries and economies reliant on the U.K. The biggest beneficiaries are likely to be the traditional safe havens, the dollar and the yen.

Lee Ferridge, the Boston-based head of macro strategy for North America at State Street Global Markets, said the yen may strengthen to 95 per dollar by year-end, from about 102 Friday. The pound will probably recoup some losses and trade at about $1.40 against the U.S. dollar, he said.

Deutsche Bank AG is keeping its bearish year-end euro forecast at $1.05, George Saravelos, co-head of global foreign-exchange research in London, said in a note. The euro slumped 2.4 percent to $1.1109 on Friday.

South Africa’s rand is among the most vulnerable emerging-market currencies because of close financial ties to the U.K., while ruble investors may find some benefit from the isolation provided by sanctions on Russia, UniCredit SpA analysts said before the vote. Morgan Stanley advised selling Australian dollar against the yen.

Investors who bet against Eastern European currencies going into the vote expect further declines. Peter Schottmueller, head of emerging-market and international fixed income at Deka Investment GmbH in Frankfurt, shorted the Polish zloty and Brazil’s real before the referendum. He closed his real position when it started trading Friday and is keeping his bearish bet on Poland, which counts the U.K. as its third biggest export destination.

Credit Suisse said in a note that it sees 10-year Treasury yields “threatening historical lows, while Germany and Japan will move further into uncharted negative territory.”

Benchmark 10-year Treasury yields fell about 19 basis points on Friday to 1.56 percent, after approaching the record low of 1.38 percent, set in 2012.

“Fixed-income portfolios should limit profit taking this month,” wrote Jim Vogel, head of interest-rate strategy at FTN Financial in Memphis, Tennessee. “Probability is high a counter-party will need, and be willing to pay more for, current portfolio items sometime in the next several weeks.” Turn to municipal bonds to escape volatility because fundamentals move more slowly for state and local governments, he said.

“We expect Treasuries to outshine Bunds over the next month,” said Michael Schumacher and Boris Rjavinski, senior analysts with Wells Fargo Securities, in a note. “Bunds have nearly kept pace with Treasuries since the U.K. polls closed, but fears over EU fragmentation should give Treasuries the relatively stronger bid.”

For now, yields on Treasuries and gilts are both falling as they did after the U.S. was downgraded in 2011, with gilts leading the way. “Should gilts lead Treasuries? We think not. We still expect capital to flow out of the U.K., with the U.S. being a very likely destination,” they said.

The impact on developing countries will be modest, said Geoffrey Dennis, head of global emerging-market strategy at UBS Securities. He may rethink his slight over-weighting of stocks in Europe, the Middle East and Africa because countries like Turkey, Greece and South Africa send significant slices of their exports to the U.K.

“People in the U.K. are going to have less money to spend overseas,” he said by phone from Boston. Asian countries, which have been underperforming emerging-market peers so far this year, may see more inflows as investors flee Europe’s turmoil, he added.

Viktor Szabo, who helps oversee about $10 billion in emerging market debt at Aberdeen Asset Management Plc in London, sees emerging markets soon reverting to “business as usual.” High-yield debt from developing countries could even benefit from a lower-for-longer interest-rate environment in Europe. “We might see more inflows into emerging debt,” he said.

Schottmueller at Deka said he searched for assets that are the least correlated with Brexit. “We added to our position in Gazprom, because there is little link between Russia’s state-controlled company and the Brexit, we bought some debt in Argentina and Indonesia and we closed our short call on the real,” he said.

“Our view is that the expected panic in credit markets will only last a day or two, and will provide an opportunity to buy at better levels,” Credit Suisse said in a note.

Morgan Stanley advised being “brave” by buying European corporate debt due to potential and existing support from the European Central bank. “We expect a strong response from the ECB,” a note from the firm said.