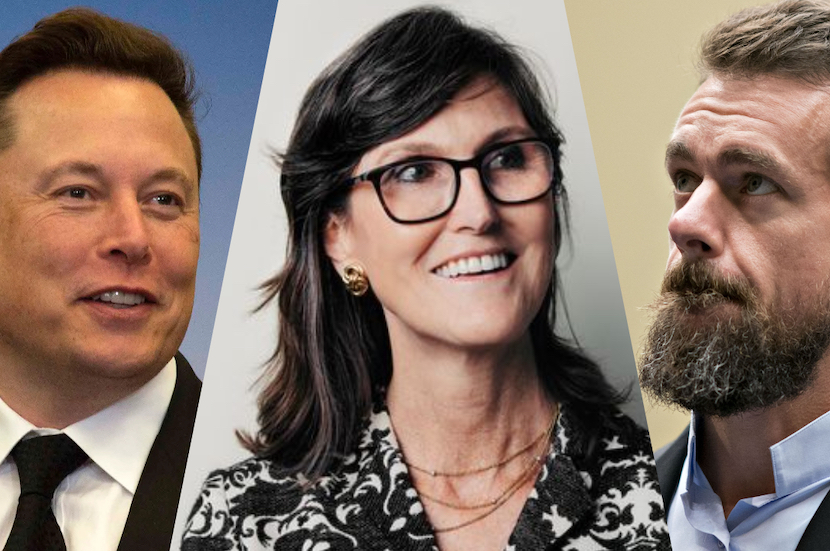 In this fascinating discussion with three of the world’s greatest visionaries – Elon Musk (founder of Tesla and SpaceX), Cathie Wood (founder of innovation lead asset management firm ARK Invest) and Jack Dorsey (founder of Twitter) lead conversation and dissect the uses and applications of Bitcoin in the real world. The B Word conference was established to ‘demystify’, ‘de-stigmatise’ and ‘correct the mainstream narrative’ around the cryptocurrency bitcoin and promote its institutional acceptance and use. Love them or hate them, this fascinating discussion is an eye opener into the world of blockchain. – Justin Rowe-Roberts

Steve Lee: I’d like to ask you, Jack, as you said before ‘Bitcoin changes everything’. Can you speak more to that?

Well, I just think a lot of what we experience in life when you really get down to the to the foundation, a lot of our monetary policy is a lot of our management systems causing so much distraction and so much cost. When you get to a system where you have the potential for people to truly own it, they can verify it themselves, you don’t have to have trust going in. You don’t have to trust it all. You can verify it through source code or whatever your appetite is and that any particular person can help drive the future of it. And at the same time, it’s not controlled by any state, it’s not controlled by bank. It’s not controlled by any corporation. These three parties of people have just been the network, people mine and also the developers constantly debating the correct roadmap and the way forward is a beautiful thing. I don’t know of many other consensus based models that have existed at that scale for this long with this amount of success and we’re still fairly early.

I met a woman in Ethiopia two years ago and she was trying to create the Lyft for Ethiopia – Elon I think I reached out to you at that time as well, because she really wanted some Teslas. She still has to take paper fiat cash from her passengers and pay all of her drivers in the same way because there’s no monetary system that she can utilise, there’s nothing digital in Africa. As a continent it is hugely interconnected from a monetary standpoint, but also hugely taxed in that same way. So a lot of the potential that I see the internet having a major currency helps her build her business in a much faster way. And also, if you consider something like Bitcoin existing before YouTube, before Twitter, before Facebook, a lot of the business models that we have today would not be the same.

We would certainly not have the dependency we have upon the advertising business model if Bitcoin existed pre Twitter. And I think the amount of business models that it enables, the amount of innovation enables going forward, especially when you consider the whole internet instead of going country by country, which you have to whenever you deal with climate finance, it really just opens the aperture. That is what I want to see in my lifetime, is a currency that is standard and sound for the internet and everyone can use.

Steve Lee: A hallmark of Bitcoin is its fixed supply of 21 million coins, Elon referenced that earlier. It may be the first system that humans have created that humans cannot later change. Cathie, I’m curious with your background in monetary history, in macroeconomics, what are your thoughts on that type of system?

I’ll just recount the story about Art Laffer. As I said, first rules based monetary system, globally ever. This is a very big idea. Once we had convinced him of the ecosystem itself. The is the role that it’s playing, given that the rule is a quantity rule that 21 million units is really a store of value. So there are three rules of money – store of value, very important – as the means of exchange, so for transactions – and the unit of account, so every good priced in terms of whatever the unit is. So store of value is its primary use right now. The others exist – unit of account, reserve currency of the crypto asset ecosystem that’s being seeded a little bit towards stable coins right now. But the store of value is a very big role and means of exchange with apps built on top of the Bitcoin blockchain we think is going to become more and more of a reality.

Right now, high value transactions take place over Bitcoin. And that is a very useful role. So we look at those and I remember saying to Art, how big could this be? And he said, well, how big is the US monetary base? Well, today it’s 8 trillion dollars. At the time we were talking, it was 4 trillion. So we’ve gone through another crisis since then. And so this store of value, this idea that purchasing power will go up over time if demand rises relative to supply. Supply ultimately is fixed at 21 million units. That’s a very good thing. Purchasing power going up globally around the world.

This idea that it’s a hedge against confiscation of wealth and that can take place in a myriad of ways. Inflation and especially hyperinflation in emerging markets is the primary way you talk about destroying purchasing power. So that’s a very big idea. And I’ll also mention deflation. In some ways, it’s a hedge against deflation. I mean, some people are confused that we think we at ARK are in a deflationary environment here in the United States, if that is true, the odds of hyperinflation in the rest of the world, especially in emerging markets, is also true.

Steve Lee: I suspect there’s not a lot of debate about Bitcoin’s potential as a store of value. But, Jack, you referenced earlier it being or becoming the native currency of the internet. Can you add more to that and also how it relates to maybe how institutions think about it?

Yeah. Just a simple example – If I happen to be in Ghana and my family is in Nigeria. Currently, I can send money back anywhere from 10 to 30 percent off the top. Whereas if you just focus on the worldwide remittance problem, Bitcoin solves so many of those problems today instantly. Without having to go through any intermediaries or any slowness or complicated systems that a corporation or state created.

So I think having some money with that is separate from the state is the idea, having it completely verifiable by everyone, including the state, including corporations, including individuals, including developers who want to build on top of it, is quite powerful. And that’s what keeps it secure and strong. And I think we need more of that, which is one of the reasons why this conversation is so important as entities come into the space. It’s not just buying an asset and holding onto an asset also and treating it as an investment. There’s something special that created this, something precious and something very unique which has to be protected. And we need to do whatever we can to operate as well.

Steve Lee: Elon, I’m curious your opinion, as you mentioned earlier, about the throughput or the importance of throughput and its concerns around Bitcoin. Do you do you think Bitcoin can become peer-to-peer cash?

Well, Bitcoin does have a fundamental scarcity limit at the base layer that’s designed in. That doesn’t mean you can’t have some layer two system in theory like Lightning. And I understand that Lightening is doing well in some small countries. There’s some question mark as to whether you need a money transfer or license, just a debate as to whether that’s needed, given that it is not an open ledger. And that’s a separate debate, of course. But Bitcoin by itself simply cannot scale to be the monetary system for the world at base layer. But with a second layer, this is possible depending upon how that second layer is implemented. That’s part of why I think there’s maybe some merit to something that may seem silly, like Dogecoin. The three things I own outside of SpaceX and Tesla, of any significance, are Bitcoin by far, and then some Ethereum and some Doge. If the price of Bitcoin goes down, I lose money. I might pump, but I don’t dump. I definitely do not believe in it getting the price high and selling or anything like that. I would like to see Bitcoin succeed.