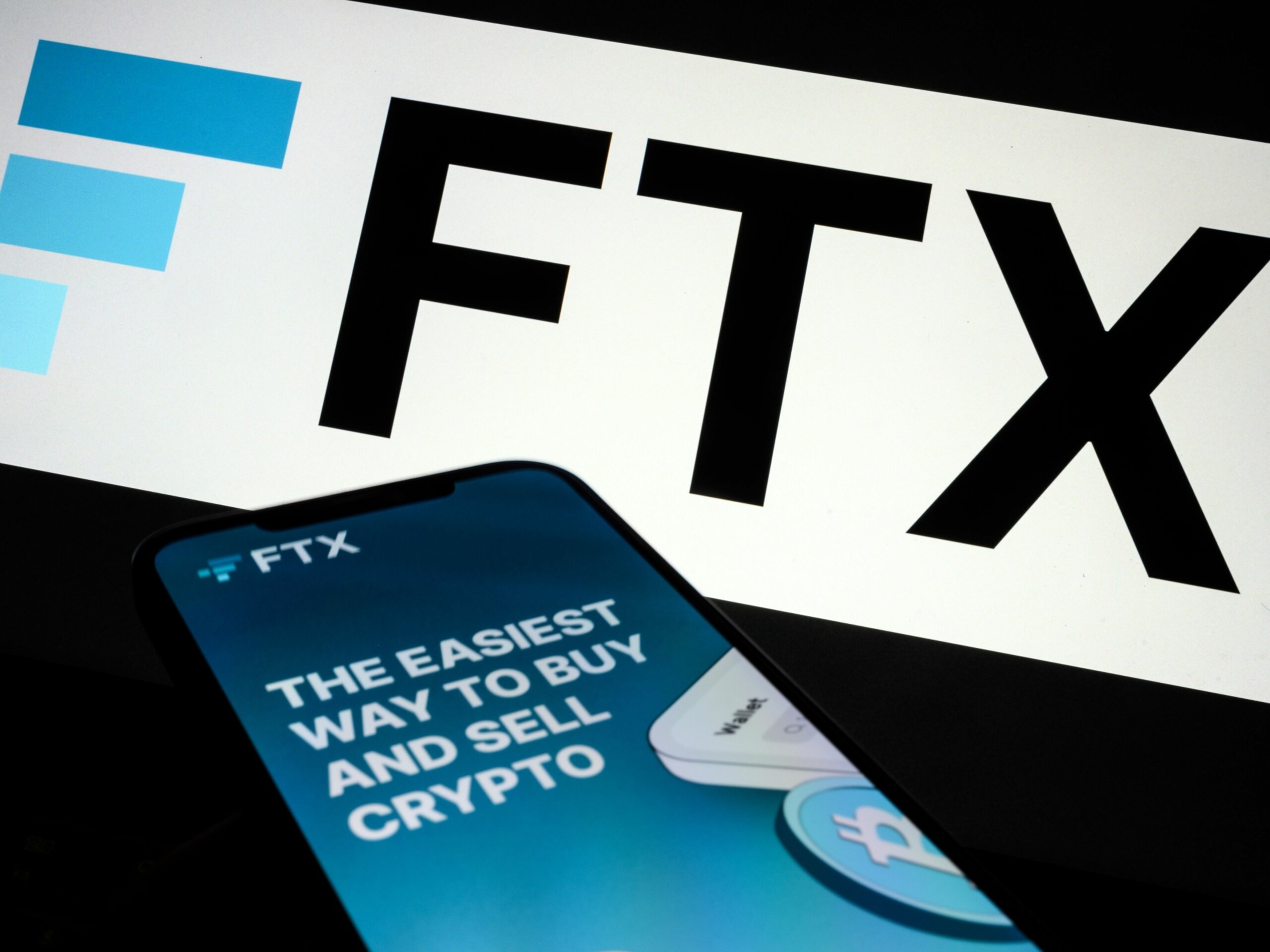 The bankruptcy of the crypto trading exchange FTX is playing into the cryptocurrency market as a whole, affecting almost all cryptocurrency tokens and bleeding into just about every other trading platform. Bitcoin has taken a massive hit, now trading under $17,000 after sitting at over $20,000 during the weeks before the collapse. Solana, a token closely linked to FTX founder Sam Bankman-Fried, toppled to less than half of its price a week ago. The falling of FTX has caused a domino effect;  many other crypto services have frozen any withdrawals from their platforms as investors make bank runs at the increased risk. The results of the collapse put FTX and Bankman-Fried at risk of criminal prosecution. More in this article from Bloomberg. – Ross Sinclair

(Bloomberg) – Cryptocurrency prices slid again, particularly tokens associated with Sam Bankman-Fried’s collapsed FTX empire. There were growing signs that customers of the bankrupt digital-asset exchange have little chance of recovering much of their deposits.

FTX Trading International held just $900 million in liquid assets on Thursday — the day before it filed for Chapter 11 bankruptcy — against $9 billion of liabilities, according to sources familiar with the matter. The data referenced a negative $8 billion of a “hidden, poorly internally labeled” fiat currency account and noted $5 billion of withdrawals by users last week.

Compounding a reputational hit to crypto that threatens to drive retail investors away and shrivel institutional demand, an estimated $477 million vanished in unauthorized withdrawals from FTX’s platform, according to blockchain analytics firm Elliptic.

The Bahamian police are working with the Bahamas Securities Commission to investigate whether there was any criminal misconduct in FTX’s collapse. Bankman-Fried was questioned by Bahamian police and regulators Saturday.

(All time references are New York unless otherwise stated.)

Singapore’s central bank said that while bankrupt crypto exchange FTX doesn’t have a license to operate in the city-state, it’s not possible to prevent local users from “directly accessing” overseas service providers.

As a result, FTX was “able to onboard Singapore users,” a spokesperson at the Monetary Authority of Singapore said in an emailed statement to Bloomberg News on Monday. “MAS has consistently reminded the public of the risks of dealing with unlicensed entities,” the spokesperson said in the statement.

Bank of Japan Governor Haruhiko Kuroda called for an accelerated effort, in line with G-7 recommendations, to regulate the crypto market in a question-and-answer session after a speech on the wider macroeconomic outlook. Japan has been planning to further loosen crypto rules by making it easier to list virtual coins, but that was before the FTX imbroglio. The crisis has raised fresh questions about how regulators should approach the volatile sector.

Cryptocurrency markets began the week in Asia on the back foot. Bitcoin retreated almost 3% at one point to drop below $16,000. Ether also suffered losses. Solana, one of the tokens associated with Bankman-Fried’s failed digital-asset empire, was down about 10% and has plunged over 60% this month.

Crypto exchange Huobi’s wholly owned subsidiary Hbit Ltd. has $18.1 million in tokens deposited on FTX, according to a filing. Some $13.2 million comprises client assets about $4.9 million are Hbit assets.

Controlling shareholder Li Lin will provide an unsecured facility up to $14 million to the group “for the purpose of covering client asset liability” if needed, according to the statement. The group’s financial performance might be “materially and adversely affected” in the event the funds are stuck at FTX, it said, adding that other assets and liabilities of the group are not affected.

Crypto exchange AAX has suspended withdrawals, citing complications with a system upgrade and blaming failures at a third-party partner.

“To prevent further risks, the technical team has had to manually proofread and restore the system to ensure maximum accuracy of all users’ holdings,” the exchange said in a notice posted online. “AAX will continue our best efforts to resume regular operations for all users within 7-10 days to ensure the utmost accuracy. In this light, withdrawals have been suspended to avoid fraud and exploitation.”

Tokens issued by Serum, a liquidity infrastructure hub built by FTX and used by market makers and lending protocols on Solana, tumbled more than 23% on Sunday alone, pricing data from CoinGecko showed. FTX owned more than $2.2 billion worth of the token as of Thursday, the Financial Times reported, citing investor materials.

Developers attached to Serum split off the project’s code in a so-called fork amid concern that an upgrade key controlling the program could be compromised, a Solana spokesperson said.

Crypto hedge fund Galois Capital is the latest company to confirm its exposure to the collapsed FTX cryptocurrency exchange. In a direct message to Bloomberg News, Galois said its exposure was between $40 million to $45 million. On Friday, Galois said on Twitter that it had “significant” funds in FTX. Galois was an early critic of the now failed Terra blockchain and its TerraUSD algorithmic stablecoin.

A team from the Financial Crimes Investigation Branch is working with the Bahamas Securities Commission to investigate if any criminal misconduct occurred in the collapse of FTX.

Zhao added that FTT contract deployers moved all remaining FTT supplies worth $400 million, “which should be unlocked in batches.” Binance followed up to say it had noticed a “suspicious movement” of a large amount of FTT by the token’s contract deployers.

Crypto financial-services platform Matrixport “continues to operate normally and the company has no risk of insolvency with respect to the developments at FTX and Alameda,” according to Ross Gan, head of public relations.

Matrixport had 79 clients that incurred losses via exposure to three products on its platform that were linked to FTX, Gan said.

Crypto exchange Kraken said it has frozen Kraken account access to certain funds it suspects to be associated with “fraud, negligence or misconduct” related to FTX. Kraken said in a tweet it’s in contact with law enforcement and plans to resolve each account on a case-by-case basis.

Former crypto mogul Sam Bankman-Fried was interviewed by Bahamian police and regulators on Saturday, according to a person familiar with the matter. Bankman-Fried didn’t immediately respond to a request for comment.

The inquiries from Bahamian authorities add to the mounting legal pressure that Bankman-Fried is facing since his FTX empire crumbled over the past week. In the US, he is facing scrutiny from the Securities and Exchange Commission over whether he broke securities rules.

Bankrupt crypto exchange FTX’s move to allow withdrawals in the Bahamas was questioned by the nation’s securities regulator.

The Securities Commission of the Bahamas in a statement Saturday said that it hadn’t “directed, authorized or suggested” the prioritization of local withdrawals to FTX Digital Markets Ltd.

It added that such withdrawals could be clawed back.

Jump Crypto, a cryptocurrency trading firm, told customers on Saturday it remains “well capitalized” after exposure to FTX. In a series of tweets, Jump said its exposure was “managed in accordance with our risk framework.” The company did not specify the exact nature of its exposure.

FTX Trading held $900 million in liquid assets against $9 billion of liabilities the day before the bankruptcy filing, the Financial Times reported, citing investment materials and a spreadsheet the newspaper had seen. Most of the recorded assets are either illiquid venture capital investments or crypto tokens that are not widely traded. The biggest asset as of Thursday was listed as $2.2 billion worth of a cryptocurrency called Serum.