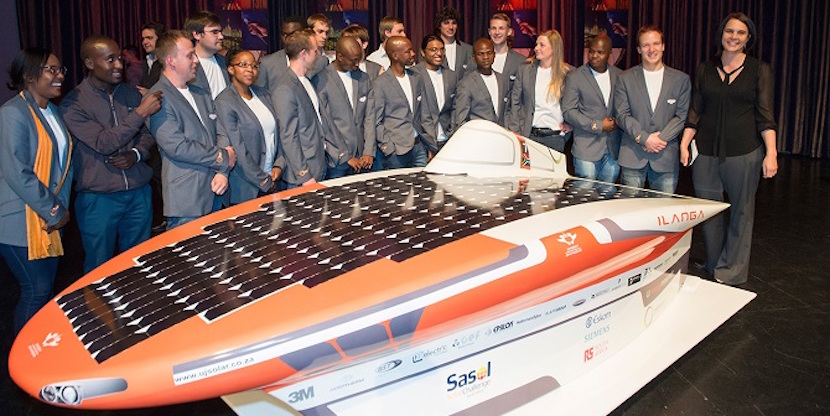 In theory, with storage capabilities, solar power could supply the world’s energy needs. The perceived advantages are there to be seen – reduced carbon emissions and long term cost savings. While one of the challenges – an overcast day – and from personal experiences with a solar geyser, there are days where the Eskom-supplied back-up needs to be used. Although with loadshedding this may not be a viable alternative either. The other challenge is change, what’s the cliche: ‘it’s tough to teach an old dog new tricks’. A group of students and teachers at the University of Johannesburg are looking to dispel a few myths and hopefully change a few minds by taking a solar-powered car on a roadtrip through Africa. – Stuart Lowman

By Jenni Evans from News24

Johannesburg – Solar panels? Check. Ion batteries? Check. 3D printer for spares? Check. A group of university students and lecturers are on a road trip of a different kind as they travel over 4,000km to test out their solar powered car the Ilanga II fuelled on nothing but good old sunshine.

“It can do up to 140km/h,” says Nickey Janse van Rensburg, who lectures mechanical engineering at the University of Johannesburg’s Energy Movement lab. “Because we don’t have a lot of sun today we are doing 90km/h,” she said from the convoy snaking toward the Northern Cape town of Kimberley to show off the vehicle named after the Zulu word for sun.

And every time they stop, they draw a crowd of people keen to see what can be done by a group of bright sparks looking for clean green alternatives. Resembling a cross between a space pod and a yacht, the aerodynamic lines of the orange and white Ilanga II draws delighted crowds wherever she pulls up. And that is exactly what the university wants – for people in the towns and rural villages along the route to see how green technology can be used in every day life.

Says Janse van Rensburg, the Ilanga II could even be plugged into a wall like a cellphone, if needed, to charge. The Solar Car Project promotes the study and development of efficient energy use, environmental awareness, energy management and innovative engineering.

On Thursday the residents of Klerksdorp who arrived with their children at the team’s leg-stretching and system-tweaking stop at the Mitsubishi garage were intrigued by what they saw. Her “engine” is 300 lithium ion batteries which work almost like cellphone batteries, and almost 1 000 business card-sized thin solar panels.

Along the route, even mayors have come out to welcome the team which is happy to explain how everything works and tell people about other ways of using “green” technology in their every day life. And of course, everyone wants to see some laps and they are not disappointed. And then it’s go time again.

Warren Hurter, engineering project manager at the university’s manufacturing research centre, is one of the three drivers taking turns on the test run. He explains that the solar panels on top of the vehicle convert the energy from the sun into power in the battery packs.

The solar panels are similar to the solar cards that powered the Mars Rover which wheeled around the red planet looking for signs of water activity, its solar panel “wings” capturing enough energy during the four-hour Mars day to enable it to explore, and communicate with the team on Earth.

The Ilanga II’s tool box is a 3D printer which will be used to replace parts it might need for running repairs. The 3D printer has already produced the steering interface, the buttons, the battery holder and the brackets for the roof panel.

“We haven’t needed to use it as yet,” said Hurter.

They have had a small suspension problem so far, and when they started their journey in Johannesburg the telemetry system which measures the car’s performance was playing up.

“But that’s all part of the experience,” says Hurter who says he was the kid who played with Lego and pulled things apart to spend hours figuring out how to put it all back together again.

Camping along the way they have a support team which stays up until late making adjustments to the vehicle.

The Ilanga II is their third solar-powered car after the Ilanga and the Ilanga 1. Their team hopes to take her to next year’s Sasol Solar Car Challenge where the Ilanga 1.1 scooped the Technology and Innovation Award previously. Local and international solar car developers compete in that race between Pretoria and Cape Town as part of their work on improving the technology and to share ideas.

The race to find energy efficient alternatives has already given rise to the electric hybrids already on the consumer market.

Because the Ilanga II is built around efficiency, it only takes one driver. The team scanned the shape of one of the drivers, placed it into the vehicle and built it around his shape. So only drivers with his shape will fit into her.

The department partnered with UJ’s Prof Vivian Alberts at PTiP Innovations, who developed and internationally patented the thin film photovoltaic technology used on the car. These are very thin solar panels which they hope to pilot in rural communities in the near future, according to the university’s website.

Hurter says the car does not have any luxuries apart from indicators and headlights. The only radio is the two-way radio the team uses to communicate. It is a bit noisy on the inside because it does not have the sound padding that cars usually have, but from the outside, it is very quiet, and has no emissions.

The project has sponsorship from companies such as Eskom and Siemens, and a support convoy provided by Mitsubishi which also wants the crew to log their vehicles’ fuel efficiency for its own studies.

And when will be able drive one? Not in the near future. The Ilanga II Solar Car Project is not being built for sale, but for now is being used to research and develop sustainable and green engineering that can be used in the real world.

They already have plans to introduce the technology to power village pumps.

Spectators can look forward to seeing Ilanga II at pit stops and lectures along its route which will include a trip through Namibia and Botswana.