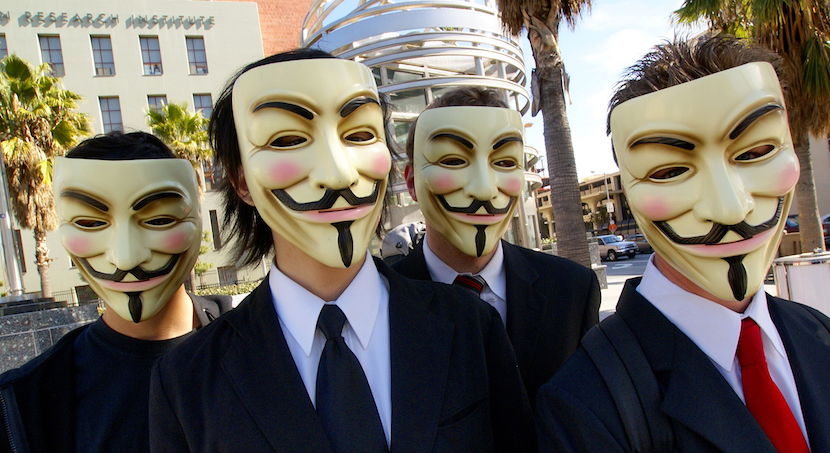 Contemporary activism comes in all shapes and forms, but most successfully through the cyber world where management’s disconnect with modernity is often extreme. Having been the subject of a couple of cyber attacks, we at Biznews are aware of how important it is to build your defences. But even the most sophisticated of these is little match for the global do-gooder group Anonymous a specialist in attacking those perceived to be abusing their responsibility. Anonymous usually targets the corrupt who possess power, in line with the mission of its icon Guy Fawkes who, in 1605, was caught with a stash of gunpowder intended to blow up the seat of Government, earning the description of being “the last man who entered Parliament with honest intentions.” Being targeted by this network of highly skilled “hacktivists” is a company’s worst nightmare. As South Africa’s national broadcaster discovered yesterday when it received the first shot across the bows in response to its recent imposition of censorship designed to support the ruling political party. – Alec Hogg

Johannesburg – A group claiming to be part of hacktivist network Anonymous says it has launched a cyber attack on SABC websites.

The main SABC website as well as other websites belonging to the public broadcaster – such as that of 5FM and SAFM – were either unavailable or slow to load on Sunday around midday.

Anonymous Africa said it is carrying out the attack in light of alleged censorship at the SABC.

SABC chief operating officer Hlaudi Motsoeneng has controversially moved this year to block the broadcaster from displaying visuals of the burning of public property.

Motsoeneng has also come under fire for pushing a sunshine news editorial policy at the SABC, which involves showing more good news stories.

“Attacks against all SABC entities now underway,” said a tweet from Anonymous Africa on Sunday.

“You have heard of the Arab Spring? Well now its time for the #African Summer!” tweeted Anonymous Africa.

The Twitter account further said on Sunday that it had carried out a ‘Distributed Denial of Service’ (DDos) attack against the broadcaster.

This type of cyber attack involves flooding a website server with thousands of requests that eventually disrupt the website.

Meanwhile, SABC spokesperson Kaizer Kganyago late on Sunday afternoon confirmed to Fin24 that the broadcaster’s websites had been hacked on Sunday.

“Our guys have found that there are people who hacked our system,” Kganyago told Fin24 after 16:20.

“It is a serious matter that we are not taking lightly,” Kganyago added.

Kganyago further said that SABC technicians were working on restoring the broadcaster’s websites.

That awkward moment when the SABC is being hacked but it then reports on its own hacking via third party platforms.. pic.twitter.com/udpD6FLxaZ

The SABC spokesperson further slammed the hackers for being “cowards” for attacking what he called a “national key-point”.

The hacktivist group said that it stopped its attack at 16:00 on Sunday, but at 16:06 the SABC websites were still down. – Fin24