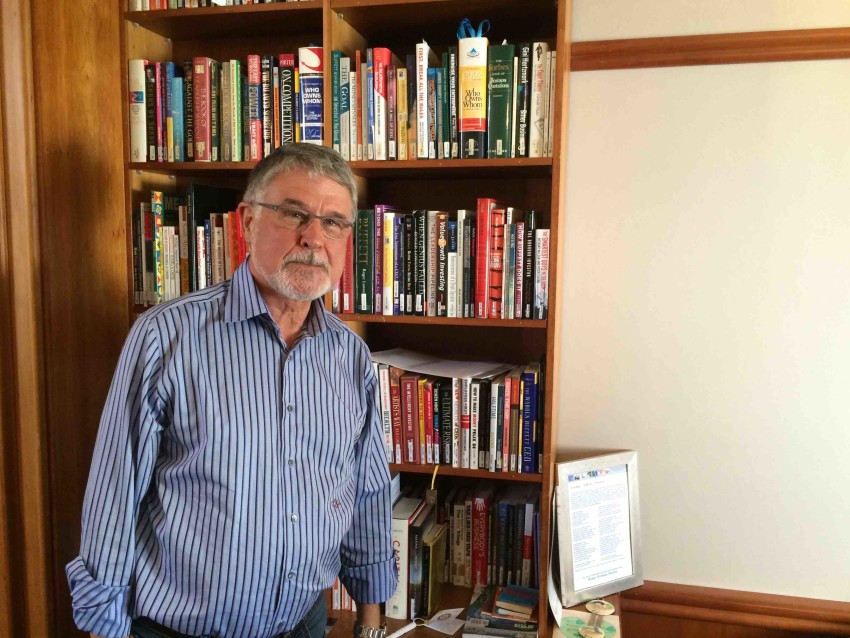 In August, it will be two decades since the team at stockbrokers Senekal, Mouton & Kitshoff gave managing partner Jannie Mouton the biggest gift of his life. By firing him a few months short of his 50th birthday, they forced the lad from dusty Carnarvon to re-assess his life. The result was the birth of what is today the R44bn PSG Group whose success has fulfilled the wildest dreams of now fabulously wealthy Mouton. To celebrate his group’s second decade, Mouton shared the 20 key lessons he has learnt with an audience of 700 at PSG Konsult’s annual conference last week. Here are my notes. – Alec Hogg

On 5 August 1995 the partners kicked me out of my stockbroking firm. Looking back, it was the best thing that could ever have happened to me. It forced me to start again. My learning from this: never give up.

After being fired, I had time on my hands and started to read and summarise books about successful people like Warren Buffett. If you have the time, read as much as you can. Especially about business and books on winners.

During this time I did a SWAT analysis on myself, drawing up a list of my strong and weak points. Once you’re finished it’s best to discuss your analysis with people you know well. After telling my wife the list showed lots of strengths and very few weaknesses, she suggested I go back and do some more work on it…..

There are opportunities everywhere. For instance, many people are worried about South Africa and can only see problems. For me the environment throws up obvious opportunities in education, banking and the food sector. Also, now, in electricity. The country will be doing just fine in 10 years. So work at ways of taking advantage of other people’s pessimism.

In 1995 I wrote down my own plan after analysing the environment and myself. The plan was often referred back to as a reminder. What I wanted was to have a JSE-listed company in the financial services sector; use the listing to raise capital; run the business with decentralised management; surround myself with smart people; move from Johannesburg to Stellenbosch; have a small head office; and think more and do less. It was  a dream but it’s all happened. But it’s also important to adapt the plan as things change.

7. Importance of friends and family –

My friends and family have walked the PSG road with me. You know you can trust them; there is little that’s more critical for a company’s success.

We almost lost the business a few years after it was founded, when ABSA launched a hostile takeover of PSG. Markus Jooste stepped in to help us fend it off. He and his Steinhoff Group remain close friends and loyal supporters with 17% of the PSG shares. Directors own 33% and friends and family another 12.5% so between us we have 62.5% that means it is impossible for any hostile party to acquire the company.

We use an index of the total return to shareholders. Over the last 20 years, PSG Group has generated an annual compound growth in earnings of 50.8% a year. Our underlying investments are also closely monitored: PSG Konsult has a CAGR of 42%; Capitec of 58% and Curro 96%.

10. Compare your returns against the best  –

All returns are relative. So we compare what our total return to shareholders against that of the most popular stocks on the JSE. PSG’s return in the past 20 years has been 50% a year. We are very proud of this when compared with, say Shoprite at 30% and Naspers at 28%.

We have made some mistakes. Buying MCubed was the worst business mistake of my life, but we also sold KWV and Channel Life when we realised they weren’t right for us. One needs to know your own assets well and remember that people make the difference. Bringing in Phil Roux at Pioneer Food; Francois Gouws at PSG Konsult and Norman Celliers at Zeder were the right appointments at the right time.

We have a large footprint today; PSG Konsult, for instance, has 194 offices and 195 000 clients. It is important to always communicate honestly and transparently to clients, investors, and the media.

When opportunities arise, execute. In 1995 when we bought into PAG, our first investment, its value was R7m. We sold it two years later at a valuation of R107m. Then in the boom of 1998 we raised R1.2bn just before the market corrected. Over the years we’ve executed on opportunities offered by the JSE shares; Teljoy; EOH; CIC and in agri-businesses. They come along every now and then. You need to seize when they arrive.

We learnt an excellent lesson in the small bank crisis of 2002. My son Jan introduced me to Perpetual Preference Shares – a brilliant way to raise long-term funding for a business. PSG was the first company to issue these PPs.

We looked at BEE very differently to most companies. Instead of seeing it as something being forced on us, PSG considered the opportunity it provided. Our first effort in 1998, Siphumele, was a failure. But the next one, Arch Equity, went from R1 to R7 a share in two years. And Thembeka Capital went from an initial capital of R1 000 in 2006 to over R3bn in 2014. One of our shareholders in Thembeka was the United Reformed Church. We had to convince them to take up 8% of the shares for R80. The company was started with R110m of assets and R110m of debt so the net asset value was R1 000 with Black shareholders owning 51% for an investment of R510. Over the years the Church has received R5m in dividends and an asset worth R300m. After the end of Thembeka last year we’ve just started BEE Newco.

You need to invest in the company you work for. I have never sold a PSG share.

Employ people better than yourself or those who have complementary skills. We have the best financial team in the business. And the best tax team. And so on.

I’ve learnt a lot about the benefit of focus from Riaan Stassen and the guys at Capitec Bank. In the early years I was always trying to convince them to take on new products. Once I suggested they sell funeral policies. Then it was airtime. Riaan kept telling me – No Jannie, we have our focus and we’re sticking to it. Capitec’s growth proves he was right and I was wrong. Their focus is paying off even more now. In 2012, Capitec’s market share was 9.1%. It is now 16.8%. So it has a lot more growth ahead.

A successful company is one that knows it is there with a licence from society and must give back where it can. The PSG Group is proud that we have paid over R3.2bn in tax. We now invest R49m in bursaries. We will keep giving back.

* Jannie Mouton is the chairman of the PSG Group. This is an abridged version of the speech he gave to the 2015 PSG Konsult annual conference held last week at Sun City.