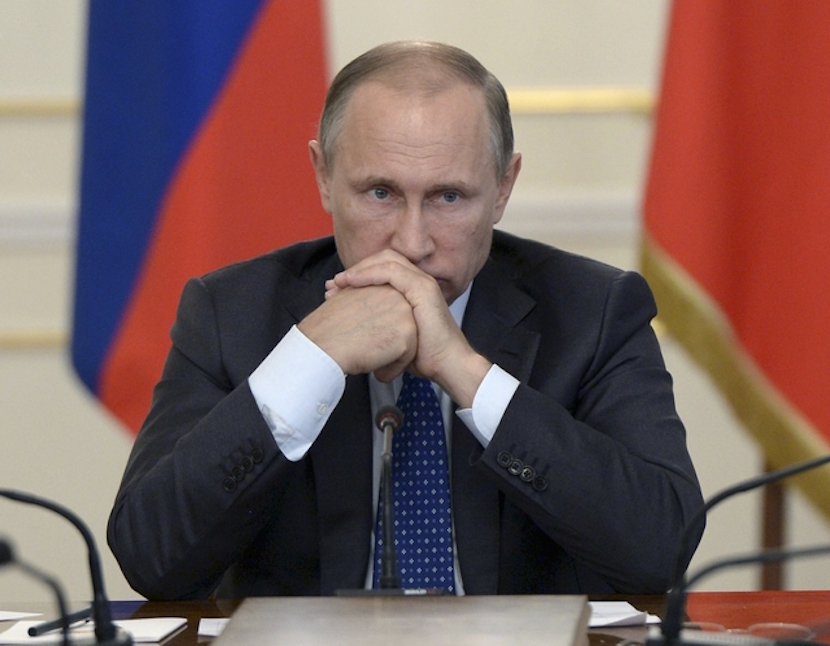 (Bloomberg View) — Russian President Vladimir Putin’s propaganda targeted at audiences outside Russia doesn’t work, but neither will any Western counter-efforts directed at Russians. A new report from the Pew Research Center explains why.

Pew surveyed public opinion among 45,435 respondents in 40 nations between March and May and found that almost everywhere, people had an unfavorable opinion of Russia:

Europeans, whom the Kremlin would like to consider deluded U.S. followers, are often even more negative about Russia than Americans are — and that’s not just Poles, more exposed than others to the conflict in Ukraine, but also previously Russia- friendly Germans and French. Russia has few friends in the Middle East and Latin America. More Turks dislike it than view it favorably despite President Recep Tayyip Erdogan’s warm relationship with Putin, and Venezuelans are no Russophiles despite their government’s anti-American consensus with Moscow. Jordanians apparently have little patience with Russia’s support of Syrian dictator Bashar al-Assad, whose war-torn country has flooded the kingdom with refugees.

Russia fares relatively well in Asia and Africa, but that’s probably, at least in part, the legacy of the Soviet Union’s past standing in those regions. Elsewhere, attitudes toward Russia have deteriorated in recent years, sliding down even before the Crimea invasion. In 2011, 49 percent of Americans viewed Russia favorably, compared with just 22 percent now.

Putin is doing even worse than his country in the court of global public opinion. According to Pew, confidence in him is highest in Africa, at 32 percent, and lowest in Europe, at 15 percent. The Russian leader’s negative ratings often exceed 75 percent: He’s an indubitable villain in the world’s eyes. U.S. President Barack Obama beats him everywhere, even in the Middle East, where he is the least popular.

In February, U.S. Secretary of State John Kerry told a Senate subcommittee that “Russia has engaged in a rather remarkable period of the most overt and extensive propaganda exercise that I’ve seen since the very height of the Cold War.” He also said the propaganda effort was succeeding “because there’s nothing countering it.” Representative Ed Royce told the House Foreign Affairs Committee that “Russia is spending more than one-half billion dollars annually to mislead audiences, to sow divisions, to push conspiracy theories out over RT television.”

Though RT, the Kremlin’s foreign-language propaganda TV channel, says it actually spends half that much, the total budget, including organizations such as Russia Today Information Agency and Rossotrudnichestvo, charged with spreading information about Russia overseas, is close to Royce’s figure. If the Pew survey results are anything  to go by, though, that’s half a billion dollars a year down the drain: The propaganda effort is concentrated on Europe and the U.S., where it’s failing the most miserably, not Asia and Africa. If it’s working in countries with large Russian-speaking communities, such as Germany and Israel, poll data give no indication of that.

Where Putin is winning his propaganda war is inside Russia, where he’s also spending more money on the effort and where he largely controls wide-reaching media. Russian media are to receive 72.1 billion rubles ($1.1 billion) from the federal budget this year. That’s one of the reasons so many Russians believe Ukraine — or even the U.S. — shot down a Malaysian passenger plane over eastern Ukraine last summer or that Russia is fighting a vast global conspiracy.

Kerry and his underlings have used that to drum up funding for efforts to counter the Russian propaganda. There are also amorphous European plans to fight Russian disinformation. Celebrity Russian expert Peter Pomerantsev, who wrote a book about working in the Russian propaganda machine, is constantly calling on Western powers to do more to fight Putin in the “battle for hearts and eyeballs,” especially in the former Soviet Union, where many people watch Moscow TV channels. “High- quality shows are not cheap,” he wrote in the Financial Times yesterday. “A channel such as a BBC Russia would cost more than €20m a year. This may seem like a lot — but take into account a single Eurofighter jet costs €90m.”

The Broadcasting Board of Governors, which runs news outlets such as Radio Liberty, is already spending $23 million on Russian-language programming this year. I doubt, however, that the investment is going to pay off. For one thing, Western- financed propaganda outlets are as weak compared with Kremlin- funded Russian media as RT is against Western organizations that produce real news. Building a machine capable of countering the mind-numbing effect of Kremlin brainwashing would be prohibitively expensive.

And even if the political will to spend that kind of money existed, there would be another obstacle. Russians’ attitudes toward Western countries have deteriorated even more lately than have Western perceptions of Russia. In 2013, 51 percent of Russians viewed the U.S. favorably; now only 15 percent do. In 2011, 78 percent of Russians thought well of Germany. Now that’s down to 35 percent.

In such a climate, there’s no way for any media effort funded from Washington, Berlin or any Western capital to break through to Russians. It will just be seen as enemy attempts to undermine the Motherland and the president. Given that the counter-propaganda projects are openly discussed in the West and these discussions are passed on with relish to the Russian audience by Kremlin media, there’s no way the majority of Russians is going to listen. And broadcasting to the anti-Putin minority is just preaching to the choir.

Pew’s numbers show how effectively Putin has managed to isolate his country and breed a siege mentality within it. His abortive attempts to improve his image overseas have ultimately served that same purpose.

* Leonid Bershidsky is a Bloomberg View columnist. He is a Berlin-based writer, author of three novels and two nonfiction books. Bershidsky was the founding editor of Russia’s top business daily, Vedomosti, a joint project of Financial Times and the Wall Street Journal, and the first publisher of the Russian edition of Forbes. He also founded the opinion website Slon.ru; ran the business book arm of Russia’s biggest book publisher, Eksmo; and worked as managing director at KIT Finance investment bank. He has an MBA from Insead in Fontainebleau, France.