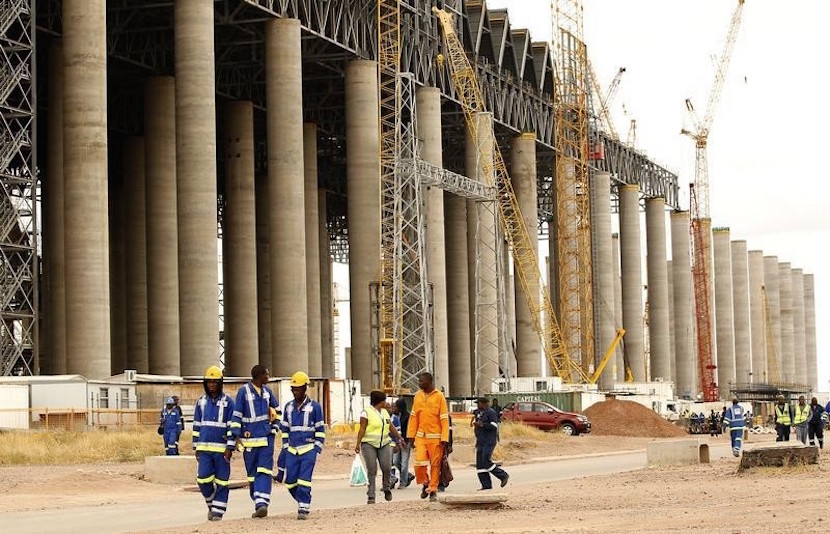 Following on from yesterday’s brilliant analysis, which showed why President Jacob Zuma is wrong about who to blame for the mess at Eskom, Elias Phaahla from the Helen Suzman Foundation looks at the progress of Medupi power station in the Limpopo Province. Progress on a project that had a set target of four years but currently sits at seven and is only expected to be completed in 2019 – but unlikely. And with delays come increased costs, which means taxpayers will be forking out more for what can only be termed ‘incompetence’ – latest estimates show costs have almost doubled estimates to R154 billion. And with Eskom and government seeing Medupi as the project to turn power fortunes around – the future may be filled with blackouts and disappointment. – Stuart Lowman

The construction of Medupi power station was first commissioned in 2007 to remedy Eskom’s electricity capacity, which had started exhibiting signs of failure to meet demand. It is the fourth dry-cooled, baseload station built in 20 years by Eskom after the Kendal, Majuba and Matimba power stations.

Eskom ranked the Waterberg Coalfields and the Lephalele area in the vicinity of the existing Matimba Power station as the most favourable option for the establishment of a new coal-fired power station. These included, amongst others, land availability in close proximity to the primary coal source and, competitive coal process [1].

The project will comprise 6 coal-fired generating units and each one will generate gross nominal capacity of 800MW (megawatts) of electricity. Collectively all the six units of Medupi should be able to produce 4,800MW of power upon completion in 2019. Once completed, the power station will be the fourth largest coal plant in the southern hemisphere and it will also be the biggest dry-cooled power station in the world. In January 2015, Eskom’s then CEO, Thediso Matona, stated that to be able to supply electricity constantly, the utility must be able to generate infrastructure to add to at least 3600MW of capacity to its 42,000MW [2].

Therefore Medupi has been designed to fill a major energy hole. Upon completion it has the potential to bring big relief to industry.

What adds to the uniqueness of the Medupi project is the fact that it is being built backwards – traditionally Eskom has always started building Unit 1 and ended with Unit 6. This new approach is the result of the rock conglomeration on the southern side, which is excavated and reused as the engineering fill on the northern side.

This section provides a timeline to milestones achieved in Medupi since the project was given the go-ahead in 2007.

“It is the bones underneath and in the vicinity. Some of the graves were destroyed there. The belief systems of some people will tell you that this Medupi dream of yours will never happen. It will be another 10 years”. – CRL Rights Commission, 2015 [3]

The completion of Medupi is taking longer than anticipated. At the time of its commission Eskom estimated the total duration of the project to take no longer than 4 years. Over 7 years later, the project is nowhere near completion and up to so far it has only been able to complete one unit with 794MW capacity [4]. While the news of this milestone was received as a welcome relief to the current electricity crisis, it is worth noting that it only represents one sixth of the total amount of electricity that Medupi intends to generate upon completion. It represents only 1.8% of Eskom’s current capacity of 42,000MW.

The deadline for power from the Medupi power station has been postponed three times since 2013.

The quote mirrors the frustrations around the Medupi project as it is simply refusing to come to completion. It highlights a grim possibility that the project might even take longer than Eskom’s current estimation, since it took 4 years for the first unit to be synchronised. Five more units are still under way. Eskom believes that Unit 5 will be ready for synchronisation into the national grid in the second quarter of 2016.

When the project was first given the go ahead, it was estimated by then Eskom CEO Jacob Maroga that the project would cost R69 billion. The latest estimates show that costs have risen massively to R154 billion.

Apart from construction costs, there is also the increasing cost of coal contracts that have already kicked in. Exxaro, one of the contractors in Medupi disclosed that this amounted to R1.6 billion in 2013 [5]. According to Eskom’s integrated report for the six months ending September 2014, debt securities and borrowings totalled R265 billion, up from R182.5 billion in March 2012.

South Africa might have to get used to power shortages until Eskom can generate enough electricity to meet demand. At the moment this shortage is hurting industry and Medupi power station was intended to turn the fortunes in Eskom. However, completion is nowhere in sight. This is despite a major milestone achieved by Medupi in March this year, which saw the synchronisation of one of its units into the national grid. Sadly the insignificant capacity produced in this one unit has not helped to alleviate the current power challenges confronting Eskom.

This is grave indeed, as Eskom’s failings have come at a very heavy cost to the economy. The situation, since it is refusing to abate, means that South Africa may have to make do with the little reserves currently available at its disposal. It would be sensible to assume that more rationing may be on the cards, as a result of this situation.

The disheartening reality about the Medupi debacle is that it comes at a heavy cost to the tax payer. This is where it gets challenging too as resources intended to speed up construction have yet to yield fruit.

Double the time of construction means double the cost of the project and more. Medupi can certainly attest to this. This means that while 2019 has been set as the revised completion date, industry might simply have to brace for the possibility of yet another disappointment.