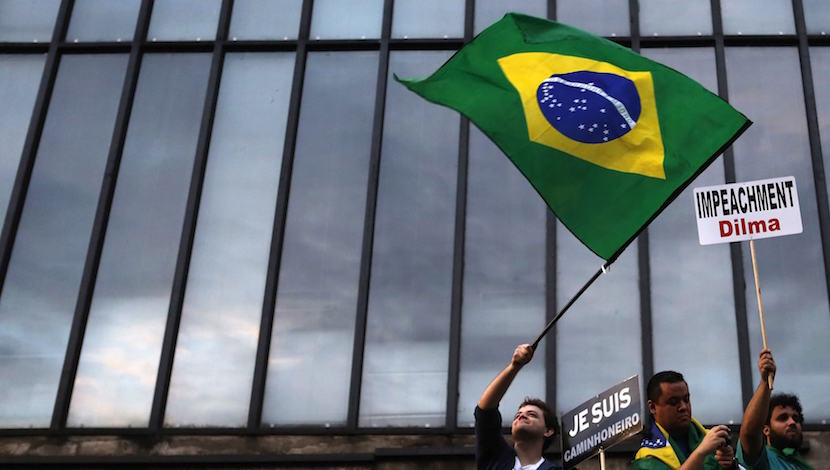 Brazilians have had enough of endemic and rampant corruption. Led by a group of lawyers and incorruptible public servants, they want to excise the biggest fish of all, President Dilma Rousseff. After a number of attempts to launch an impeachment process 63% of the nation wants, those after the “corrupt” President – who chaired State oil company Petrobras during its worst period of bribery and payoffs – appear to have now found their vehicle. In a process reminiscent of the way Chicago Police finally nailed gangster Al Capone on neglecting his taxes compliance, Rousseff’s critics have sanctioned the country’s highest electoral court to open an investigation into the way she financed her recent re-election campaign. It seems as though the only rational Brazilian who doesn’t want to President Dilma Rousseff to go is President Rousseff herself. With Putin on one side and Rousseff on another, lovely babies SA is hanging around with in BRICS. – Alec Hogg

(Bloomberg) — Brazil’s top electoral court agreed to open an investigation into allegations that President Dilma Rousseff illegally financed her re-election campaign. The charges could provide grounds for her removal from office along with Vice President Michel Temer.

Five of the court members voted to open the investigation on Tuesday and two against.

The vote came after the biggest opposition party, known as the PSDB, alleged that Rousseff and Temer used more money than reported and received donations from companies involved in a corruption scandal to fund last year’s re-election campaign. The administration denies the charges and will have a chance to defend itself. An investigation could take months and the administration can make appeals to the Supreme Court.

The electoral court’s decision, while widely anticipated, poses a threat to Rousseff’s political survival as she struggles to contain fallout from a shrinking economy and a wave of corruption probes into some of her political allies. If the court rules her campaign used illegal funds, it could call for new elections or even possibly name runner-up Aecio Neves of the PSDB the winner, according to lawyers.

Gilmar Mendes, one of the judges in the court who voted in favor of the investigation, said in August there were indications the ruling Workers’ Party was indirectly financed by money from state-owned oil company Petrobras through an alleged scheme of kickbacks. The party denies the charges and says the court previously vetted its donations.

The electoral-court investigation isn’t the only threat to Rousseff’s political survival. Lower house President Eduardo Cunha has started reviewing formal requests from politicians and citizens to impeach the president on grounds that range from alleged corruption to charges that she doctored fiscal accounts. Rousseff denies wrongdoing.

Government auditors are expected to vote Wednesday whether the administration violated the budget law last year. The decision could provide a legal justification to open an impeachment process in Congress. Members of Rousseff’s legal team on Tuesday evening asked the Supreme Court to suspend the ruling, saying one of the auditors erred by telling journalists he would vote against the administration.

In a push to shore up support in Congress and fend of the threat of impeachment, the president last week handed allies greater control of her ministries. Her new Cabinet faces votes on Wednesday when lawmakers are scheduled to decide whether to uphold presidential vetoes against spending increases.