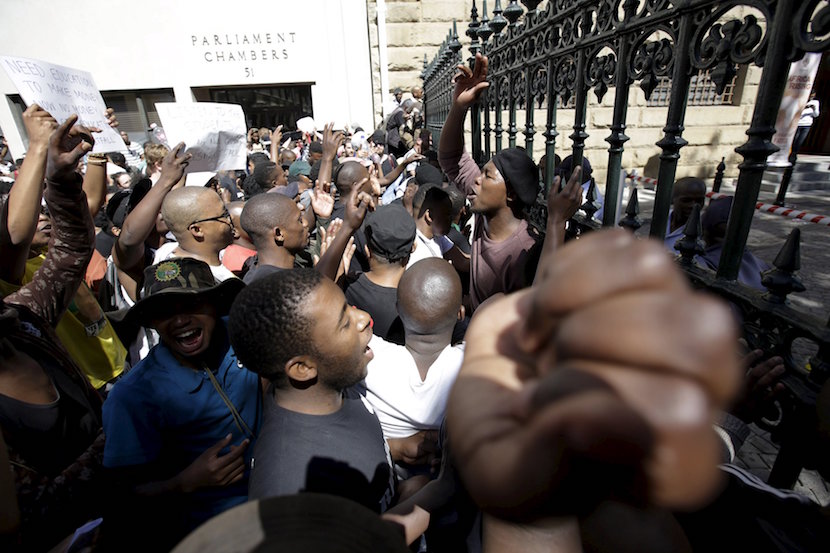 The #FeesMustFall saga took a new twist as students once again made their way to parliament, this time calling on president Jacob Zuma for answers. The crowd of students were not interested in speaking to anyone else, as they felt the man who was willing to spend money on a private jet and residence (Nkandla), should have the time and resources to talk about fees. The saying goes ‘digging ones own hole’ and it’s blinding to think the President would have planned to have the jet to be disclosed just as students begin exams across the country. The students want answers but one could argue the majority of the tax-paying nation would like some too. – Stuart Lowman

Cape Town – Hundreds of Cape Town students marched to Parliament on Monday demanding to speak to President Jacob Zuma, refusing to settle for anyone “less”.

They were not impressed when they were addressed by Public Works Minister Thulas Nxesi instead.

Nxesi said, however, he was addressing the students in his capacity as the acting higher education minister. He said Higher Education Minister was presently unavailable.

Students, however, dismissed Nxesi as a “random man they did not even know”, insisting they would only hear from Zuma.

They were from the universities of Cape Town, Western Cape and Stellenbosch.

This comes after students were last week “stood up” by Higher Education Deputy Minister Mduduzi Manana following a promise to give them feedback.

Manana had accepted a memorandum of demands in October.

UCT student leader Athabile Nonxuba said on Monday the group of protesters had made an appointment with the president, Nzimande and Labour Minister Mildred Oliphant at their protest last week, and wanted them – and only them – to address the students.

Nxesi told the students that the president was out of the country, but they booed, shouted, shoved, and sang while he read through a response to their memorandum.

Nxesi, however, refused to be silenced and read through the whole response surrounded by police and bodyguards.

He said the students’ demands had been heard, including the call for free quality education, an Afrocentric curriculum, an end to outsourcing of services and police brutality.

Speaking over shouts of “who are you talking to, we want Zuma?”, Nxesi told the students the department had calculated the cost of the shortfall in response to the no-fee increases for 2016.

“The shortfall is estimated at approximately R2.3bn. Of this amount, the department has already committed to contribute R1.935bn and the universities will contribute R394.7m. The department has had to reprioritise some of its commitments in order to release this money to off-set the no-fee increases.”

Nxesi said the department shared concerns about free quality education for the poor and that their demand for an Afrocentric curriculum and the department would urge academics and curriculum developers to bear it in mind when developing curricula.

Read also: How the world sees us: Chaotic, ham-fisted, brutal – pics from Parliament

The students continued to demand that they hear from the president, saying they would wait for him, even if he was too busy “building his R4bn jet”.

“What kind of a man, a leader, gets an expensive jet while people are struggling? Builds himself a personal hotel while we can’t afford fees?” Nonxuba asked.

The students dispersed a few of hours after they had congregated outside Parliament when it was clear no one else would address them.