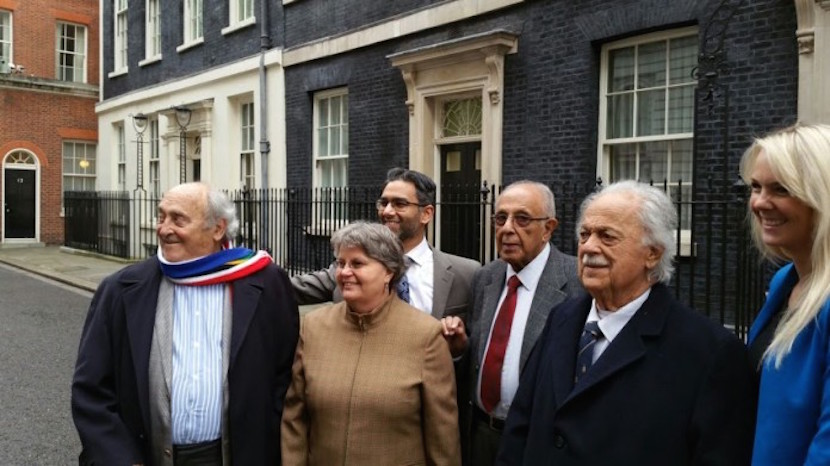 John Battersby is a consultant by trade but every now and again he returns to his first love writing. He is one of South Africa’s finest journalists, having edited and reported for major publications in his homeland and internationally. Living in London John reports back on a moving ceremony in which the City of London awarded Denis Goldberg, Ahmed Kathrada and Andrew Mlangeni, Rivonia Trialists, its greatest honour. – Stuart Lowman

Denis Goldberg and Ahmed “Kathy” Kathrada, once branded as terrorists and criminals by the British government, were embraced and their life achievements celebrated in the hallowed inner sanctum of the British establishment this week.

They were joined by the two surviving members of the Rivonia legal team, George Bizos and Lord Joel Joffe, who were honoured in the same way and accompanied their former clients during a whirlwind three days of events.

Lord Joffe, who was the instructing attorney in the Rivonia trial and wrote the definitive book on the tiral, described advocate (barrister) George Bizos as one of the greatest “silks” of his generation and a “brilliant strategist”.

Joffe, the leading South African philanthropist in the UK, invited 50 guests to the gala evening to recognise their key role in the anti-apartheid struggle. He has devoted much of his life to ensure that the role of Bram Fischer as head of the Rivonia legal team is given due recognition.

The highpoints of the extraordinary visit of the Rivonia veterans included a 30-minute meeting with British Prime Minister David Cameron at 10 Downing Street, a gala event at London’s premier Grosvenor House Hotel attended by 750 people, a packed panel event at The Guardian newspaper and a meeting with lawyers at the House of Lords.

Cameron praised their leadership and courage following a 30-minute conversation with the four and Baroness Patricia Scotland, now Secretary-General of the Commonwealth, praised them for having sacrificed their own lives and freedom for the freedom of others.

At the gala evening, one of the keynote speakers – Makaziwe Mandela, the late Nelson Mandela’s eldest daughter – praised the Rivonia veterans for “speaking truth to power even when it is their own government”.

She said that her father dreamed of a “glorious new South Africa” in which there would be no betrayal of colleagues.

“We children paid a price but it was worth it,” Mandela said. “Today we have a better quality of life.”

Baroness Scotland, the first woman and the first black Briton to occupy the role of Attorney General of England and Wales (2007-2010), said that Nelson Mandela and his colleagues in the Rivonia trial had personally inspired her to become a lawyer.

“Each of you are the embodiment of freedom because you gave up your own freedom for the freedom of others,” said Baroness Scotland who is also the first black woman to be an alderman (councillor) in the City of London.

“For giving me my freedom it is a great honour to be part of a ceremony awarding you the Freedom of the City of London,” she said.

At the Guildhall ceremony, which follows traditions dating back to the 13th century, the four Rivonia heroes were required to swear allegiance to the Queen and were presented with little books instructing them how to be good citizens. Goldberg winked in the direction of the audience in several occasions and kept his fingers crossed.

Being a Freeman of London, which once held great practical advantages for being allowed to trade freely in the City, is now of purely symbolic value. It allows Freeman to drive their sheep across London Bridge to the Smithfield meat market.

Nelson Mandela and Archbishop Tutu were both recipients of the award as was the Bafana Captain Aaron Mokoena in 2010 and former South African High Commissioner Zola Skweyiya.

Denis Goldberg, whose task was to build up arms and ammunition for the non-lethal overthrow of the apartheid state in the 1960’s, was the de facto spokesman for the group and entertained his hosts with his down-to-earth frankness in defending the actions and intentions of the Rivonia insurrectionists.

“There was never any doubt in our minds that apartheid would die before we did,” he said.

“The only surprise was that it took so long,” said Goldberg who called in a BBC interview during his visit for a renewal of the leadership of the African National Congress at every level of Government.

Goldberg was speaking at a panel chaired by Lord Hain of Neath, himself a leading anti-apartheid campaigner who led the stop-the-tour boycott and went on to become Leader of the House of Commons and was enobled last year as a labour Peer. Hain was three times a Minister in the last Labour Government.

The visit was the brainchild of Sir Nicholas Stadlen, a retired English High Court judge who interviewed Denis Goldberg for the Guardian newspaper two years ago and became fascinated with the Rivonia trial and its central place in South Africa’s transition as well as its lessons for a troubled world.

As a former High Court Judge, Stadlen was particularly intrigued with the paradox which was central to the South African dilemma: that in order to end oppression and overthrow unjust apartheid laws which the majority has not voted for and which they had no legal power to vote against the Rivonia group concluded that they had no option but to break the law.

Stadlen has over the past three years recorded dozens of filmed interviews with all the key players, lawyers and associates of the Rivonia group including the three surviving veterans, the legal team, and the family of Bram Fischer, the brilliant lawyer and underground activist, who headed the legal team in the Rivonia trial. The footage will form the basis of an upcoming documentary on the Rivonia trial.

Stadlen is currently working on a book on Bram Fischer and the other Rivonia lawyers and defendants during a visiting fellowship  at St Antony’s College in Oxford University.

He is planning to create a multimedia website under the umbrella of a charity know as “Life is Wonderful” which was also the name of the gala event on Monday night. It captures the moment of sentence in the Rivonia trial which was literally a matter of life and death.

Goldberg’s mother called out to him: What is it? “Life,” he replied. “Life” is Wonderful.

Stadlen’s mission is to load his and other materials which tell the Rivonia story on the world wide web to make it accessible to a wider global audience and particularly to the youth and leaders of tomorrow to inspire them with the qualities exemplified by the Rivonia group: courage, commitment integrity, selflessness and belief that ordinary people can change the world.

In response to questions, Goldberg said that it took the apartheid government 15 years to realise that they would have an easier time in the international arena if they treated the political prisoners with dignity rather than systematically humiliating them by rationing food and having different levels of prison uninforms to the prisoner’s racial group.

Goldberg quoted Winston Churchill’s threats to eradicate Nazism by “setting Europe ablaze from end to end”. So it was in the fight against apartheid racism, he said.

“There comes a point where there is no option but to take up arms,” he said. “Armed struggle can be justified. There is no universal rule. It depends on the circumstances,” Goldberg said noting that the ANC’s violence was limited to targeting the violence of the state and was never aimed at “soft targets”.

Asked whether whites had been instrumental in upholding the apartheid state by one of a group of 35 senior school pupils who attended the events at Downing Street and Guildhall, Goldberg said that whites had voted in successive National Party governments but he noted that victims of apartheid included Africans, coloureds and Indians and those whites who actively protested against apartheid.

“As a white, I benefitted from being white, everything was open to me,” he said. “It wasn’t open to be fellow South Africans who were black,” he said. ”There is racism everywhere but in South Africa, racism was the law.”

Goldberg, the son of a trade unionist father and seamstress mother, said he was politicised at a young age by the paradox of white South Africans going to fight against Nazi racism in Europe while upholding racism at home.

“I followed Nelson Mandela because it was the right thing to do. I had a conscience. I followed him so l closely that I ended up in jail.”

Kathrada said that there were three key elements that made Mandela such a potent leader.

Firstly, he made clear to us that in prison we were no longer leaders and could not give instructions to those outside.

“He made it clear that it was our job to look after those who were in prison,” he said.

Secondly, Mandela said that the focus of their struggle in prison should not be directed against the systematic humiliation they were subjected to in jail but that they should keep their focus on the long-term objectives.

Thirdly, Mandela participated personally in the various hunger-strikes that were held in prison.

The visit was sponsored by the City of London and a gala event in aid of the global charity Global Citizen which runs campaigns and lobbies with governments to end poverty in line with the UN Millennium Development Goals.

The proceeds of the fundraising gala will be divided amongst the charitable foundations of the three Rivonia veterans and Global Citizen.

Goldberg said that Mandela should not be canonised as a saint but rather as an exceptional leader who was able to achieve his objectives through tactics and strategy and was able, therefore, to mobilise people against injustice not only for South Africa but for the whole world.