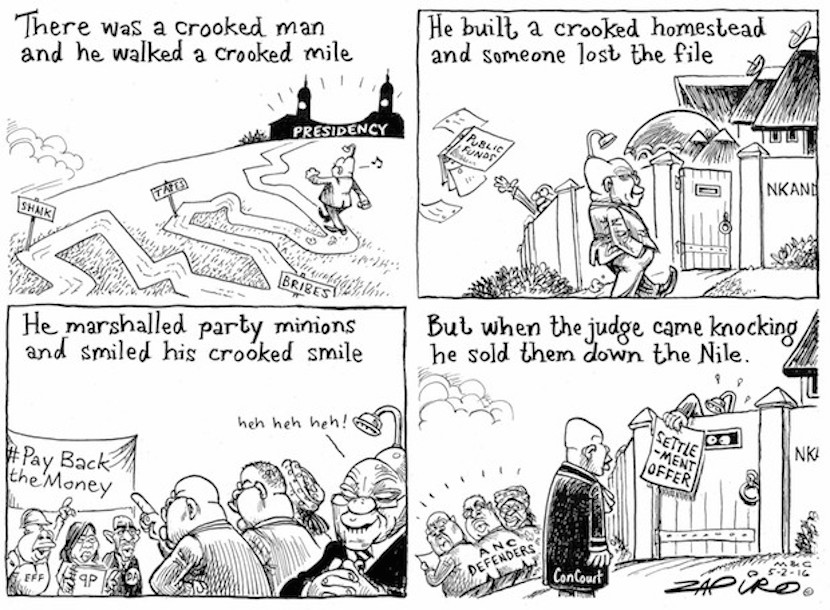 The brashness of cronyism in South Africa is sometimes breathtaking. Unlike elsewhere on earth, those “businessmen” who have benefitted from President Jacob Zuma’s network of patronage don’t shirk from being associated with their benefactor. Indeed, they cannot jump high enough when Number One needs them, delighting in publicly expressing loyalty. The immigrant Gupta family the most obvious and effusive, having built a State-funded media enterprise in appreciation of State issued licences and contracts on which their wealth has been created. This kind of thing might just be another downside of a young democracy. That a country needs to work through the pain of a period when those elected to office presume it delivers them ownership of the public purse to allocate and distribute at their personal whim. Eventually, though, those funding the Treasury, the taxpaying base, do tire to this inefficient allocation of their contribution to national capital. And as we saw during the Apartheid era, slowly they start avoiding, then evading and eventually actually physically departing to another geography where they feel their taxes are better appreciated. Already wavering taxpayers won’t be celebrating today’s public proclamation by the “Friends of Jacob Zuma” that all their cornered patron need do is ask and they will settle his bills. Loyalty to the flawed carries a huge price. As these cronies are sure to discover in time. – Alec Hogg

Durban – The Friends of Jacob Zuma Trust will help the president repay what he owes for his Nkandla upgrades if he approaches them, its founder has said.

“As an organisation we are virtually non-existent because we did what we had to do back then. But if he needs us individually, we will always support him, like we always did in the past,” businessman Don Mkhwanazi told News24.

He said Zuma had not approached the organisation for financial help. He would also not comment when asked if he would personally help Zuma out.

On Tuesday, Zuma asked the Constitutional Court for an order that Auditor General Thembekile Kimi Makwetu and Finance Minister Pravin Gordhan determine how much he should repay for those upgrades to his private Nkandla homestead not related to security, namely the visitors’ centre, amphitheatre, cattle kraal, chicken run, and swimming pool.

Put this matter to rest

Mkhwanazi said Zuma’s decision should be applauded as he had done it in the country’s long-term interest.

“I believe he wants to put this matter to rest so that we can focus on more important things and so that people can stop sniping at him.”

Read also: Mondli Makhanya: Zuma got sucked in by Shaik and taxpayers paid via Nkandla

The trust, comprising the country’s leading businessmen, helped pay Zuma’s legal bills during his fight against his corruption charges.

Zuma’s long-time friend and ally, Durban businessman Vivian Reddy, also said Zuma had not approached him for any financial help.

In 2012, Reddy said in an interview with The Mercury that he had lent Zuma money to pay for the first phase of Nkandla and that he had repaid it. Reddy told the paper that Zuma took out a bond for the home.

Greytown businessman Philani Mavundla, who previously publicly said he would settle Zuma’s Nkandla bill, did not want to comment. The construction tycoon told the Sunday Times that Zuma’s backers had discussed his debt.

Neither Zuma’s son, Edward, nor nephew, Khulubuse, were immediately available for comment.

Trying to find out whether Zuma will be able to pay it out of his own pocket is more difficult than it seems.

As president, he is entitled to a level of privacy regarding any assets and interests he may want to dip into to settle the account.

To get a list of what he owns requires an application to the secretary of Cabinet, director general in the Presidency Cassius Lubisi. News24 has submitted an application.

In 2010 Zuma was forced to apologise for delays over submitting his register of interests and at the time his lawyer, Michael Hulley, said it was the size of his family that made it complicated, as well as anomalies in the Executive Ethics Code.

Although he is private about his family, it is known that Zuma has four wives and is believed to have 20 children.

He has stated that he has a bond on his home at Nkandla, KwaZulu-Natal, where he was born and brought up, but it is not known if it is paid off.

A question was sent to the Presidency regarding the bond.

The son of a policeman and domestic worker, Zuma was not born with a silver spoon in his mouth.

And the trial in which he was acquitted of rape would have set him back millions were it not for the fund-raising efforts of the Friends of Jacob Zuma Trust.

When he became president in 2009 he became entitled to the use of an official house in Durban, Cape Town and Pretoria, with most costs paid for by the state.

In May 2010, Hulley said, “The president does not hold any directorship, membership or shareholding in any company, either public or private, nor is he associated in any way therewith. The suggestions to the contrary are devoid of any truth and are regrettable.”

In October 2014, the Mail & Guardian reported that he had received 140 gifts that year including pineapples and Nguni cattle, but there was nothing about what he had interests in or owned in his personal capacity.

His salary is about R2.7 million a year.

He is reported to have a house in Forest Town, Johannesburg, but other than that, little is known about his personal finances.- News24