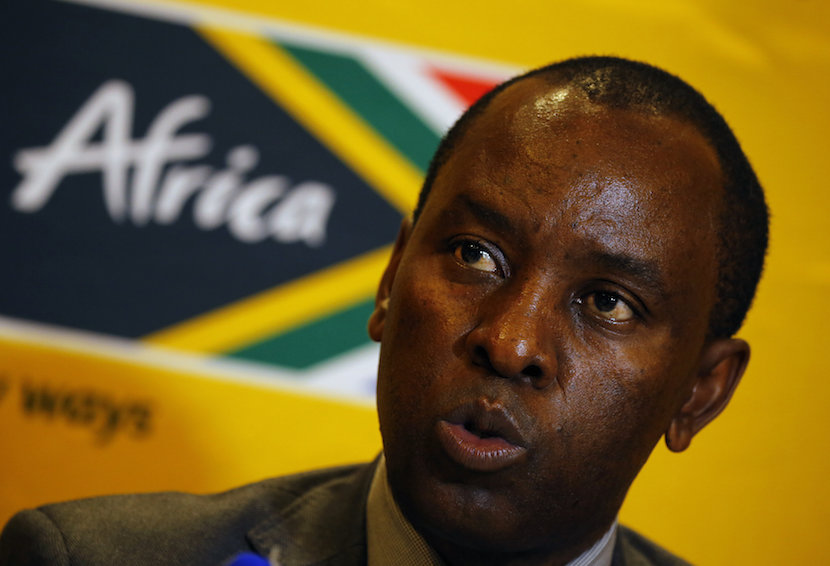 An ANC insider told me this week senior party members are sick of President Jacob Zuma’s network of patronage that benefits family members and crony capitalists like the Indian immigrant Gupta family. Word from inside Luthuli House is the only way to rid South Africa of this cancer is through allowing (helping?) the muck to surface. All of it. That’s a fresh perspective from which to view this excellent Bloomberg story confirming close ties between the Guptas and a political unknown who was surprisingly catapulted to Mining Minister. To paraphrase Churchill, this is not the end of the ANC’s house cleaning. It is not even the beginning of the end. But it is, perhaps, the end of the beginning.  – Alec Hogg

(Bloomberg) — Three months after he was appointed South African Mines Minister, Mosebenzi Zwane helped the Gupta family acquire Glencore Plc’s Optimum colliery. Now it’s emerged that his political adviser has a business connection with the family, who are friends of President Jacob Zuma.

After Zuma promoted Zwane from provincial politics to run the mines ministry in September, Malcolm Mabaso, 33, became his political adviser. Mabaso and Salim Essa, a business partner of the Guptas, are both directors of a company called Premium Security and Cleaning Services, according to publicly available company filings.

Essa is a director at a company called VR Laser Services, in which the Gupta family investment vehicle holds a minority stake. Last month VR Laser entered a partnership with state defense company Denel SOC Ltd. to market its products in Asia, Gary Naidoo, a spokesman for the Gupta family, said on Feb. 6.

The Guptas’ alleged influence in shaping policy in the Zuma administration has drawn criticism from the opposition and expressions of concern from within the ruling African National Congress. At least one of the brothers is a director in at least a dozen companies along with the president’s son, Duduzane, according to public documents, and have employed one of his wives. The family, led by brothers Atul, Ajay and Rajesh, came to South Africa from India in 1993 and built a business group ranging from computers to uranium mining.

With flagging economic growth and the threat of a credit rating downgrade, Zuma is also under pressure from business leaders to show South Africa is an attractive investment destination. Confidence in the economy took another hit in December when he appointed a little known lawmaker as finance minister to replace the respected Nhlanhla Nene. He changed the decision within four days, and appointed appointed former finance minister Pravin Gordhan, after it triggered a plunge in the rand and government bonds.

“There’s absolutely no doubt that here you have a situation of patronage that gives advantage to those who are politically connected,” Somadoda Fikeni, a political analyst and professor at the University of South Africa in Pretoria, said in a phone interview. “Even ANC leaders are starting to raise this issue.”

Zwane said in a Feb. 8 interview that he encouraged the Optimum acquisition in the hope of saving jobs. He said he flew to Switzerland and met Glencore Chief Executive Officer Ivan Glasenberg, with whom he discussed the deal. Oakbay Investments Ltd., a company owned by the Guptas, said Zwane didn’t influence the deal.

“I took credit, because I said, ‘Engage,”’ he said. “‘Let’s save jobs. You have a profit mentality, but jobs are at stake here.”’

Mabaso declined to comment when reached on his mobile phone on Thursday. Essa didn’t immediately respond to a voicemail message seeking comment. Zwane’s spokesman, Martin Madlala, said he would respond to e-mailed questions.

Oakbay Investments said in an e-mailed response to questions: “Like many businesses with mining interests in South Africa, we are familiar with Minister Zwane and Mr. Mabaso, but we have no material relationship beyond that.”

The Democratic Alliance and Economic Freedom Fighters opposition parties have criticized Zwane’s decision to advance the Guptas’ acquisition of Glencore’s Optimum coal complex, which is currently being scrutinized by the Competition Tribunal.

Tegeta Exploration & Resources Ltd., a company in which the Guptas and Duduzane have a stake, agreed to buy Optimum for 2.15 billion rand ($140 million) in December, days after Zwane flew to Switzerland.

If successful, Tegeta will operate two more mines and will be supplying nearly five percent of state power utility Eskom Holdings SOC Ltd.’s roughly 120 million metric tons of coal. It will also gain access to Africa’s biggest coal terminal so it can export the fuel.

The Guptas gained national attention in 2013, when they flew 217 people in a chartered jetliner to the Waterkloof air- force base in Pretoria, the capital, for their niece’s wedding. As a “National Key Point,” the facility is prohibited from undertaking commercial activities. A government report into the incident that became known as “Guptagate” concluded that the landing had been authorized because Zuma’s name was falsely invoked.

The family apologized for the incident.

Johannesburg’s Business Day and the Mail & Guardian newspapers reported that Zwane helped getting permission for the Guptas to land the plane at Waterkloof, an allegation Zwane denies.