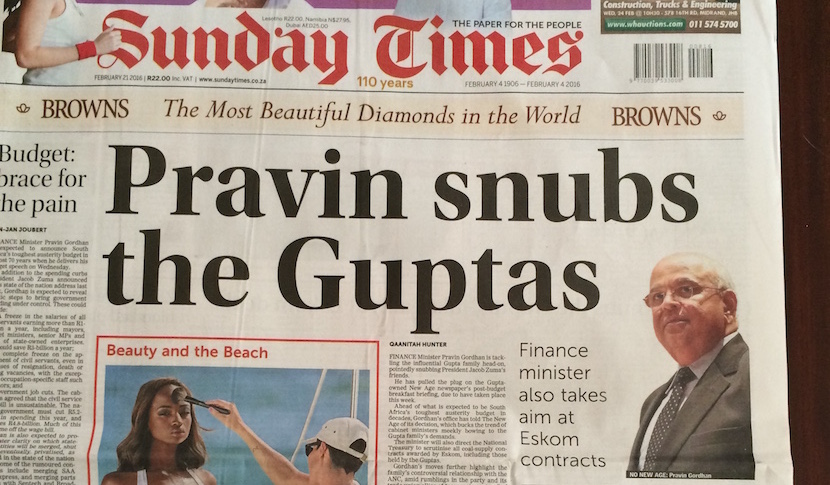 One of the South African democracy’s greatest assets is its vibrant, noisy and very independent media. It is in stark contrast to most developing nations, China the most obvious example, where opposition is blocked through censorship or decree. Given the Soviet thought-processes which still dominate much ANC thinking on the subject, the Fourth Estate remains an inconvenient thorn which President Jacob Zuma and his like would love to remove. But Press Freedom is enshrined in SA’s Constitution. So politicians chafing under the media spotlight have done the next best thing by spending taxpayer money on advertising campaigns to support friendly voices. Trouble is, the cost of such support bears little resemblance to economic reality, far exceeding market related-rates. Reinstated Finance Minister Pravin Gordhan has drawn a line in the sand by refusing to engage in the traditional post-Budget Breakfast co-hosted by the Gupta-owned New Age newspaper. The symbolism is enormous, given the lock which the Zuma-aligned Guptas enjoyed over such events. – Alec Hogg

Cape Town – Cracks are forming in the Gupta family’s perceived influence over state resources, with Treasury’s decision not to take part in the post-budget New Age Breakfast this Thursday.

A Treasury official told Fin24 on Wednesday that the department will still hold a post-budget breakfast with Finance Minister Pravin Gordhan, but it won’t be organised by the breakfast show on SABC, which is sponsored by the Gupta-owned New Age newspaper.

Cabinet ministers are regulars on the show and President Jacob Zuma has used the platform annually the morning after his State of the Nation address. This year was no exception.

The Sunday Times revealed that Treasury will partner e.tv and eNCA, after Treasury told SABC they did not want the Gupta’s sponsoring the breakfast, resulting in the SABC pulling out due to contractual obligations.

“It felt like a good time to break with tradition and explore the other requests,” Treasury spokesperson Phumza Macanda told the Sunday paper. “SABC might not be broadcasting the event live, but their reporters will still be able to cover the event.”

Treasury sources told the Sunday Times the “main reason Gordhan’s breakfast briefing would not be shown on the SABC was the public broadcaster’s perceived link with the Guptas”.

Questions have since emerged of Zwane’s role in Glencore’s sale of Optimum mine to Tegeta Exploration and Resources, owned by the Guptas and their business partner Duduzane Zuma, the son of the president.

Van Rooyen’s appointment as finance minister in December lasted a few days, because Zuma was reportedly persuaded by senior ANC leaders and the country’s top business executives to backtrack on the decision to spare the country’s economic collapse.

Gordhan, who Zuma removed as Finance Minister in 2014 for attempting to curtail government spending, was asked to return to the post after Nhlanhla Nene was ousted and Van Rooyen dumped.

Analysts believe Gordhan can now exert more power than ever to pull South Africa back from the brink of a ratings downgrade to junk status, a scenario that would have untold economic repercussions.

However, it is unclear whether his budget address on Wednesday will be able to satisfy rating agencies Standard & Poor’s (S&P), Fitch and Moody’s, all based in New York.

After the budget address, S&P will “wait and judge” what progress is made in the first half of the year, looking at growth numbers, the current account, wage round labour relations and other factors, said Montalto.

However, he believes S&P will eventually decide to downgrade South Africa to junk status in its December ratings review. – Fin24