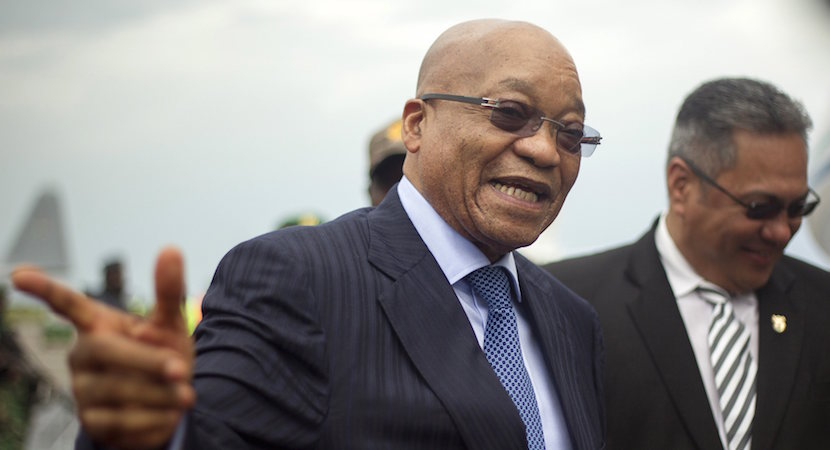 Right now, whatever did or did not happen behind closed doors at the ANC’s pow-wow over the weekend is irrelevant. More so is that heat is leaving the governance kitchen. Peace appears to have broken out between the President and the Finance Minister who was forced upon him. South Africa’s “share price” – the Rand – clawed back 30c from yesterday’s worst point when hostilities were at their peak. A developing country is defined as one where politics trump economics. South Africa is very much a developing country. After a turbulent week dominated by political players issuing pointed public statements and the spread of wild rumours, calm has been restored. How doesn’t matter. Not for the moment anyway. Because it is hard to be productive when hearts rule heads. – Alec Hogg

JOHANNESBURG, Feb 29 (Reuters) – South Africa’s rand firmed against the dollar on Monday after President Jacob Zuma said he was not at war with Finance Minister Pravin Gordhan, following media reports that they had fallen out.

The currency of Africa’s most industrialised economy fell nearly 4 percent on Friday, its biggest daily loss since 2011, after Gordhan said there were attempts to discredit him and the integrity of the Treasury.

Gordhan’s statement followed a newspaper report which quoted sources as saying he had threatened to resign after receiving a letter from the elite Hawks police unit questioning his knowledge of a suspected rogue unit at the revenue service.

This followed media reports of a clash between Gordhan and the head of the South African Revenue Service (SARS).

The Hawks also said they were not investigating Gordhan, and there was no case against the minister.

Gordhan, who headed SARS at the time, has said he has no case to answer. A presidency statement on Monday said Gordhan’s position was under no threat, calling reports to the contrary “total fabrication and mischievous sensationalism”.

Government bonds were mostly weak. The yield on the benchmark instrument due in 2026, which soared as much as 28 basis points in early trade, was up 5.5 basis points to 9.42 percent.

“Following the events of December after Nene was sacked, markets are much more sensitive about these developments and the fact that Zuma has made these statements, it does seem as though it has soothed investor fears to some extent,” said ETM Analytics market analyst Jana van Deventer.

The currency however remains vulnerable after Treasury forecasts last week showed the economy may expand just 0.9 percent in 2016, the lowest rate of growth since South Africa emerged from recession in 2009.

“The perception out there is that Zuma is not really supporting Pravin Gordhan,” said analyst William Gumede, an associate professor at Wits University’s school of governance.

“He has to show leadership and show the markets that he is really supporting Pravin. If he doesn’t, he undermines the credibility of the Treasury, and the Treasury is what is standing between us and getting junk status.”

Ratings agency Moody’s rates South Africa two notches above junk, but Standard & Poor’s and Fitch have it just one step away from a sub-investment grade. All have warned of possible downgrades since Nene’s firing.

“The market’s reaction is not quite as negative as in December 2015 when Nene was replaced, but if there is another market-unfriendly change, then the market reaction could be worse and more permanent,” Citi strategist Adriaan Du Toit said.

Barclays Africa Group Ltd closed 6.10 percent lower at 136 rand on speculation that Barclays Plc was evaluating strategic options for its 62.3 percent stake in the African business, a holding worth some $8.3 billion.